“Disgusting” and “degenerate” are the words used to describe Richard Strauss’s Elektra. No, not the current production by the Canadian Opera Company (which is quite thrilling) but its first staging in England in 1910.

Strauss and Hofmannsthal throw the idealized view of Greek culture into the dustbin. Their Elektra although based on Sophocles’ play features a woman who is unhinged and whose sole mission in life is revenge. Her father was brutally murdered by her mother Klytemnestra and her lover Aegisthus. Now Elektra wants to kill both of them. 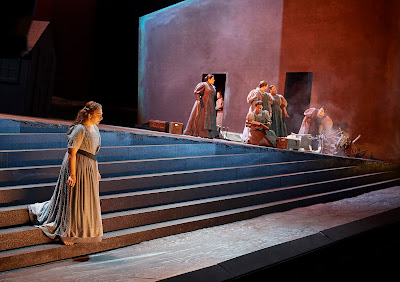 Christine Goerke as Elektra (at left) in a scene from the COC's production of
Elektra, 2019, photo: Michael Cooper
Director James Robinson in the revival of his 2007 production takes a middle road in his portrayal of Elektra. He does not overplay her madness or the squalor of her life but gives us a woman who is consumed by hatred and a desire for revenge but who is not completely deranged.

Soprano Christine Goerke (a notable and well-known Wagnerian, especially to Torontonians) delivers a powerful and obsessed Elektra. She is on stage longer than the rest of the characters and from her opening howl of “Agamemnon” to her final eruption of joy at the end, she dominates the production. Robinson does not make much of Elektra’s final dance of triumph before she drops dead. This is not Salome but the scene could use a few more dramatic steps.

Elektra is very much an orchestra versus the singers opera and unfortunately there were a few occasions when the orchestra overshadowed not to say drowned out Goerke. They struck me as unnecessary lapses in balance between stage and pit and did not detract from Goerke’s overall thrilling performance.

Soprano Erin Wall sings Chrysothemis, Elektra’s sister, who dreams of a life that involves children and is not consumed by hatred. Wall is better known for lyric soprano roles and Strauss puts the same vocal requirements on Chrysothemis as he does on Elektra. Happily, Wall belts out her part with power and resonance and shows that she can handle Strauss as well as Mozart.

Soprano Susan Bullock who sang Brunnhilde in the COC’s Ring Cycle of 2006-2007, sings the role of the troubled Klytemnestra. After the description by Elektra of how Klytemnestra murdered Agamemnon in the bath with an axe, our sympathy for her is limited but Bullock makes her more pathetic than loathsome. For those with long memories, Bullock sang Elektra in COC’s 2007 production.

Her lover Aegisthus (tenor Michael Schade) gets no sympathy as a character but Schade gets kudos for his performance.

Bass Wilhelm Schwinghammer plays Orestes, the key person in effecting the revenge and the most important male role in the opera as the instrument of revenge. Otherwise it is a relatively small role but the recognition scene is done well and Orestes does his job as does the singer. 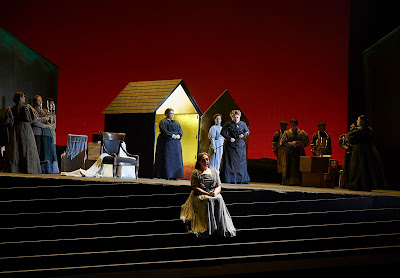 A scene from the COC’s production of Elektra, 2019, photo: Michael Cooper
The set by Derek McLane is a challenge to understand. A few steps lead to the courtyard of the palace where the floor is tilted to the right. There is a wall with two entrances on the right which are rarely used and what looks like a garden shed at the rear. This is Klytemnestra’s entrance and when the door is opened we see gilded walls. The set may well represent the confused interior of Elektra’s mind.

The costumes by Anita Stewart are 19th century dresses for the women and black suits of the era for the men. This is not a throwback to fifth century Athens but an original view of the Greek myth

Elektra may well be described as an opera starring the orchestra and some outstanding singers. Strauss demanded a large orchestra and from the opening thunderclap of Agamemnon’s motif to the final dance sequence and death of Elektra the music is electrifying. Johannes Debus and the COC Orchestra perform magnificently.

The ills of the mythical House of Atreus lasted for five generations have been around since the dawn of western civilization. They have inspired countless works including over 100 operas alone. Klytemnestra is queen of Argos or Mycenae not of Thebes as stated in the programme. The version of their story that inspired Strauss and Hofmannsthal about a century ago reached back across the eons to shock people in 1910 and thrill us in the 21st century.

Elektra by Richard Strauss opened on January 26 and will be performed a total of seven times on various dates until February 22, 2019 at the Four Seasons Centre for the Performing Arts, 145 Queen Street West, Toronto, Ontario. Tel:  416-363-6671. www.coc.ca