Mules is a powerful new play that starts on an emotional pitch that keeps increasing until the lights go down ninety minutes later. The three actors give stellar performances that display emotional range, power of expression and endurance that call for nothing but superlatives. The impact on the audience is stunning, relentless and jaw-dropping.

A few details. The plot of Mules could not be simpler. Two women walk into the bathroom of Vancouver Airport. Crystal is bringing cocaine from Colombia and she must give it to Cindy who has to deliver it to her dealer.  That is the whole plot. Playwrights Beth Graham and Daniela Vlaskalic have created an outstanding play out of this by filling in the details. 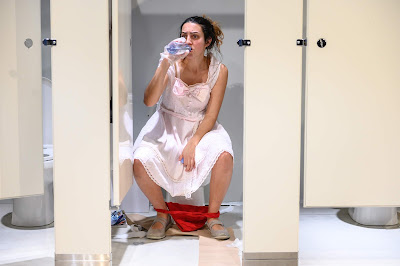 Eva Barrie in Mules. Photo: Dahlia Katz
The background. Cindy and Crystal are old friends. They went to high school together and did some silly things like smoking pot and one of them perhaps putting manure in a girl’s locker. They both live on the lower rung of the social order. Crystal has a child out of wedlock and works in a store. She is not very bright and can’t make ends meet.

Cindy, who was a leader in high school, adored by Crystal, is an exotic dancer who dabbles in drug trading and has recently lost her job. She is in desperate financial straits and works for a drug dealer who would not hesitate to kill someone for an ounce of cocaine. She lives in terror of him. She is also a liar and did not hesitate to use Crystal.

The two friends drifted apart but Cindy found Crystal and promised her $10,000. All she had to do was go to Colombia, swallow one kilo of cocaine and bring it to Canada. The cocaine comes in 35 capsules that Crystal swallows. The details of the ingestion can be described as painful, cruel, unbelievable and disgusting. Some of those reactions are simply middle class ignorance of the “real” world.

The play opens when Crystal and Cindy enter the airport washroom. Crystal is exhausted and ready to faint. She has not eaten anything for 2 days and customs kept her for quite a while listening to her explanations about a quick trip to Colombia.

Many complications arise not least of which is the appearance of Troy the cleaner who discovers what the women are up to. The complications will continue to mount up until the shattering conclusion when the lights go down.

A few words about the acting. Anita Majumbar as Cindy and Eva Barrie as Crystal are on stage for the entire 90 minutes. They start on an emotional high and their distress, agonizing fear of being caught, paralyzing terror of the dealer and the dreadful anguish for the ejection of the capsules lead to emotional highs that they must express. They do with acting skill and expressiveness of the highest order. 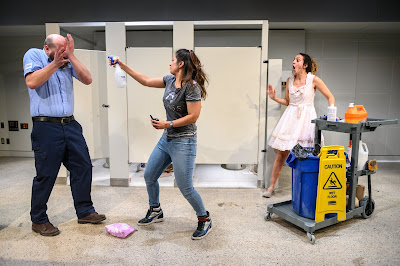 Tim Walker, Anita Majumbar and Eva Barrie. Photo: Dahlia Katz
Tim Walker as Troy has a smaller role but he is no less deserving of recognition for his acting. He escalates the emotional level and does a superb job in the role.

Vikki Anderson directs the play with a sure hand for emotional highs that may seem difficult to maintain for the whole performance. Outstanding work.

The set by Brandon Kleiman consists of three toilet stalls facing the audience and a sink on the opposite side. The stalls and the sink are put to good use.

I am giving you only a few fairly scanty detail about this extraordinary play and outstanding production. It may not be suitable for people with delicate palates. For the rest of us it is incredible theatre. My reaction when the lights went down was (in less polite lingo)

Holy, feces!
_____
Mules  by Beth Graham and Daniela Vlaskalic in a production by Theatrefront in Association with Hit and Myth premiered on February 15 and continues until March2, 2019 at Crow’s Theatre, 345 Carlaw Avenue, Toronto, Ontario M4M 2T1. theatrefront.com, http://crowstheatre.com/