Ravi Jain has built up a considerable reputation in Canadian theatre as an actor, director and writer. He has now taken a further step forward and adapted Shakespeare’s Hamlet which is now playing at the Berkeley Street Theatre. The result has some fine performances but it does not quite work.

Transgender casting has become commonplace in the theatre. All-male or all-female actor productions of Shakespeare are not uncommon and a woman as Hamlet, Richard II, King Lear and many other roles is almost routine Jain has gone a bit further. He uses nine actors, seven females and two males, to play fifteen roles. The original text has thirty-four roles.

Christine Horne tackles one of the toughest roles, that of Hamlet. She has received several awards for her acting ability but even though she showed some flashes in the role she is simply not ready for Hamlet. She speaks all of his lines as if they were prose and shows little of the depth of feeling of the troubled prince. As with most of the casting, the question is what is the point of casting a woman in the role unless you have an astonishingly talented and accomplished woman who wants to play the role? 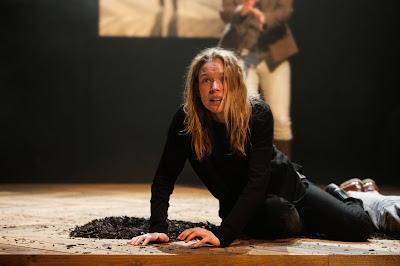 Christine Horne. Photo: Bronwen Sharp
Jeff Ho, a slender young man, plays what looks like a very uncomfortable Ophelia. Between the signing of Dawn Jani Birley, Polonius and Claudius he almost disappears from the production.

Rick Roberts exudes a fine presence as Claudius. Barbara Gordon’s Polonius is good but a bit short of being the wise counsellor or the garrulous fool. Miriam Fernandes shows energy and spunk as Rosencrantz. She also plays the Player King and is simply hilarious as the Gravedigger. She bellows “Figaro” in a bucket and makes a memorable gravedigger. Hannah Miller is equally dynamic as Guildenstern and plays the Player Queen, Osric and a Guard.

Khadijah Roberts-Abdullah plays a strong Laertes but do we really need a woman in the role?  What is the effect that is supposed to be created by having a female Laertes giving advice to Ophelia played by a man?

Aside from his choice of cast, Jan makes this an aggressively bilingual production – American Sign Language and English. Deaf people do not consider themselves impaired. They simply communicate using a well-developed sign language and Jain wants to demonstrate that fact for us. 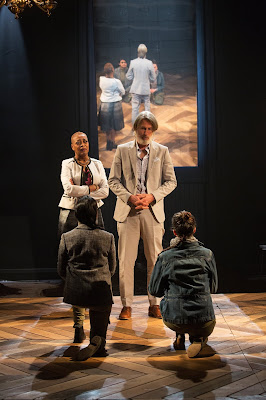 Karen Robinson, Rick Roberts. Photo: Bronwen Sharp
Horatio is played by Dawn Jani Birley who does not say a word but signs all his lines. In addition to that she translates all the lines of the other actors when they themselves are not signing. As such she becomes a pivotal part of the production. When she is not playing Horatio, she frequently stands in the center of the stage translating the dialogue of the other actors. In the final scene, for example, where Laertes and Hamlet fight and the Queen and the King end up dead, the four characters sit with their backs to the audience and deliver their lines. They do not move and Birley stands in front of them facing the audience and translates all their lines in American Sign Language.

The play ends with Hamlet’s “the rest is silence.” Horatio becomes very emotional and signs some lines as s/he cries but there is no “Good night sweet prince and flights of angels sing thee to thy rest” or any other further dialogue.

Many productions have some performances translated in American Sign Language by having a translator stand on the side of the stage. I have not seen a production like this one where most of the actors speak and sign for some of the time and almost all dialogue is translated in ASL but not all sign language was translated into spoken English.

I am not sure how the deaf people in the audience felt about the production. Are they pleased and honoured that such loving attention is paid to their mode of communication? Or do they prefer their Shakespeare done in their own language exclusively?

Does this adaptation and production work? Not for me but it may fascinate some people.
_______

Prince Hamlet, William Shakespeare’s play adapted by Ravi Jain for a production by Why Not Theatre and presented by Canadian Stage opened on February 7 and will play until February 24, 2019 at the Berkeley Street Theatre, 26 Berkeley Street, Toronto, Ontario. www.canadianstage.com  416 368 3110