THE ANGEL SPEAKS – REVIEW OF OPERA ATELIER CONCERT AT THE ROM

Every city deserves a Marshall Pynkoski and a Jeannette Lajeunesse Zingg but very few have even one let alone two. Toronto does. As Co-artistic Directors of the incomparable Opera Atelier, they organized a highly civilized concert at the Royal Ontario Museum entitled The Angel Speaks.

The one-hour concert featured instrumental music, singing and ballet in a gorgeous combination. The music ranges from the baroque to the modern with Henry Purcell and William Boyce providing the former and Edwin Huizinga bringing the latter. 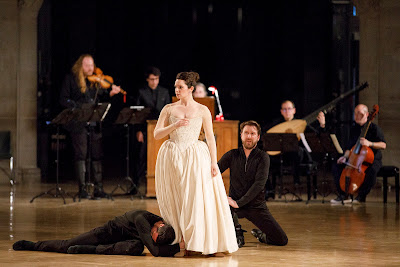 Edwin Huizinga’s compositions were a major part of the evening. He has composed Annunciation inspired by Rainer Maria Rilke’s mystical poem as translated by Grace Andreacchi. Annunciation, of course refers to the announcement by Gabriel to Mary that she will give birth to Jesus Christ. Huizinga, a prominent violinist, also composed and played Inception, a piece for baroque violin. His music is modern but looks back to the baroque in an amazing blend of the two styles. Tyler Gledhill choreographed contemporary dance to accompany Huizinga’s performance and the singing by Asselin and Blumberg. Simply remarkable.

It is worthy of note that Opera Atelier commissioned Inception and its performance at the concert was its North American premiere.

Most of the concert pieces were accompanied by dances performed by the Artists of Atelier Ballet. The five dancers, Tyler Gledhill, Juri Hiraoka, Edward Tracz, Dominic Who and Jeannette Lajeunesse Zingg performed the baroque sequences which were choreographed by Ms Zingg. 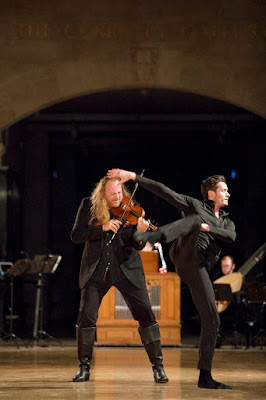 The concert was performed in the Currelly Gallery in the Royal Ontario Museum. This is a rectangular theatre-in-the-round with several rows of seats surrounding the playing area. The spectators were no more than several feet from the playing area.

It was a highly civilized evening. If the intent was to showcase the work of Opera Atelier, so be it. In early April, they are producing Mozart’s Idomeneo with Measha Brueggergosman at the Ed Mirvish Theatre.  My only and persistent complaint is why are there so pitifully few productions of baroque opera in Toronto?
____

The Angel Speaks was performed once on Thursday, February 21, 2019 and will not be performed again as far as I know but you can ask Opera Atelier if it will be repeated. www.operaatelier.com