COME FROM AWAY – REVIEW OF REVIVAL OF LEGENDARY CANADIAN MUSICAL

Calling a musical that opened less than four years ago legendary, may strike some as a bit of a stretch. It is not. Come from Away is being produced in cities around the world and quite aside from its qualities as a musical entertainment, what makes it legendary is the attraction of its humanity, its decency and its ode to the better side of human nature. And it is a true story that resulted from one of the worst acts of terrorism – the attack on New York’s Twin Towers on September 11, 2001.

Gander, Newfoundland, a town of about 9000 people was a place with an airport. On September 11 when all planes over or going to the United Sates were grounded, 38 of them, carrying some 7000 people landed in Gander.

The Mayor was having his morning coffee at Tom Hortons, the bus drivers were on strike, the policeman was warning speeders to slow down (expletive deleted), a new reporter was starting her career and life in the town had taken its regular rhythm. The news came  that something terrible has happened and planes are landing at the airport. 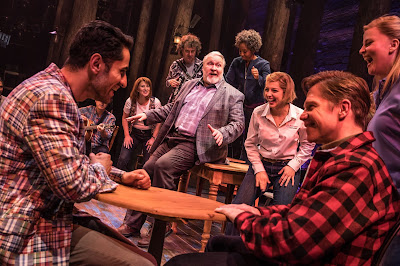 The cast of COME FROM AWAY - Canadian Company, Photo by Matthew Murphy
The people mobilize their resources and galvanize their humanity to feed, house and care for 7000 people. That is an incredible and heartwarming story.

Bur acts of decency no matter how heroic do not make a musical. Irene Sankoff and David Hein do and they are bloody good at it.

Come from Away has fifteen musical numbers almost all of them sung by the company. The songs do have quiet moments but the somber songs are followed by numbers of increasing speed and urgency. From the opening “Welcome to the Rock” we follow the townspeople as they mobilize everyone and everything (like all the town’s barbecues and store supplies) to accommodate the new guests. The passengers fret about being left in the plane for twenty-plus hours but they soon realize the magnitude of the town’s decency.

Twelve actors play all the parts of townspeople and passengers as we witness some prejudice, some fear and some misunderstanding as well as courage, compassion and love. There are tears and there is laughter that, along with the musical numbers, carry the audience forward towards the end of the crisis which lasted five days.

The visitors leave but nothing is forgotten. Ten years later they return to mark and celebrate with love and generosity those five days when the human spirit was triumphant, decency dominant and the experience for the participants and the audience watching the musical unforgettable.

Who does it? Sankoff and Hein, for a start. They saw a great story and went to the source – the people that lived it – and tell their experiences with moving and rousing music, humour, pathos and humanity. 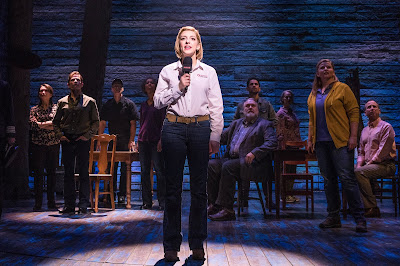 Steffi DiDomenicantonio and the cast of COME FROM AWAY – Canadian Company,
Photo by Matthew Murphy
Director Christopher Ashley who sets the pace and has twelve actors represent numerous characters. Smooth, seamless changes in roles with the right emphasis on emotions. Sad but not maudlin, light humour and keep the audience with you for every second of the 100-minut performance.

The brilliant well-disciplined and talented cast deserves and gets a standing ovation. All of them play several roles and deserve praise. George Masswohl plays the Mayor whose morning Pepsi is interrupted and he has to deal with the town, the striking bus drivers and a few thousand visitors. Which may be easier than what Bonnie (Kristen Peace) of the SPCA has to deal with. There are pets in the planes including a monkey that expresses his distress by tossing his feces.