Oslo is a big play that tackles a very big subject. Playwright J.T. Rogers takes on the secret negotiations between Palestinians and Israelis fostered by Norwegians that led to the famous signing of the Oslo Accord on September 13, 1993.

Israeli Prime Minister Yitzhak Rabin and Yasser Arafat, the Chairman of the Palestinian Liberation Organization signed the agreement and the two implacable enemies shook hands. The ceremony took place at the White House before President Bill Clinton and the world. Rabin, as quoted by Rogers at the end of his play, spoke eloquently about Israelis and Palestinians living together on the same soil. “Enough of blood and tears. Enough” he intoned.

It was an expression of hope only. There is no peace in the region. 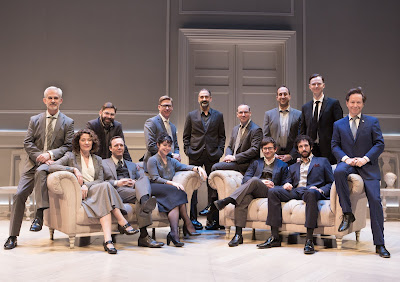 The Company in the Studio 180 Theatre production of OSLO. Photo credit: Cylla von Tiedemann.
The lead-up to the Oslo Accord did accomplish a number of items that Rogers enumerates at the end of the play. They are of some interest in the long and unsuccessful process of solving what appears to be an unsolvable problem. But the more interesting aspect of the negotiations is that they were done in secrecy and were started and steered through by low-ranking Norwegians.

Rogers has collected all the information he could get his hands on and dramatized the proceedings into a coherent political and personal drama. A play devoted solely to the negotiations, however dramatic and historically interesting, would be a bore but Rogers steers far from that. He does so by bringing out the human characteristics of the people involved.

The process is the brainchild of Terje Rød-Larsen (Blair Williams) who is described without further detail as the Director of the Fafo Institute for Applied Social Sciences. He is married to Mona Juul (Marla McLean), an official in the Norwegian Foreign Ministry. They are an attractive, intelligent, passionate couple who want to do something about the Israeli-Palestinian conflict. They are criticized for being perhaps dilettantes but they show passion and ability in keeping the process going.

They set in motion unofficial, secret meetings between Ahmed Quirie (Sanjay Talwar), the PLO’s Finance Minister and Hassan Asfour (Omar Alex Khan), a liaison officer of the PLO with Yair Hirschfield (Amitai Kedar) and Ron Pundak (Jordan Pettle), both professors of economics, not representing Israel because that would be a crime. But they are negotiating on behalf of peace and the official and unofficial become blurred. 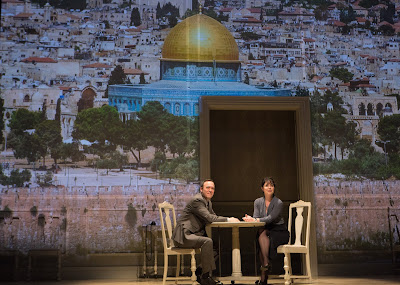 Blair Williams & Marla McLean in the Studio 180 Theatre production of OSLO.
Photo credit: Cylla von Tiedemann.
The negotiations are done away from the audience and we see the negotiations and the Norwegian enablers outside the negotiating room. These are people with deep-rooted hatred and mistrust of each other engendered over decades of murderous conflict. The Israelis consider the PLO members as simple terrorists.

We see anger, aggressiveness, arrogance, braggadocio, grand-standing and an apparent inability to reach any compromise. But the negotiators with the help of their hosts start seeing each other as people. They are parents, they love their children and they want peace. Slowly their humanity affects if it does not take over their official and intractable positions. They break bread, as they say, and start finding solutions. The political and the personal are joined to make fine drama.

Ken Mackenzie’s single set is a brightly lit and elegant-looking anteroom to the negotiating arena. there is a judicious selection of photographs projected as well.

At two hours and forty-five minutes, including intermission, Oslo covers a lot of ground and director Joel Greenberg maintains a good pace throughout.

Half a dozen actors take on two roles which is usually not a problem but in this production there is an exception. Patrick Galligan in addition to being the Foreign Minister is also the groundsman at the manor where the meetings take place. Sarah Orenstein doubles as the Minister’s wife and as the cook and housekeeper at the manor. They look exactly the same in both roles. Annoying.

In the end you get a detailed chapter in the history of the Israeli-Palestinian attempts at peace and get close to the personal conflicts and resolutions and a fine night at the theatre.
__________________