THE FATHER - REVIEW OF COAL MINE THEATRE PRODUCTION

The Father is a beautiful play about a beautiful mind in the throes of dementia. It is about a man suffering from Alzheimer’s disease and the word beautiful refers to what was and not the tragic condition of the main character and so many others in our society.

The play by French playwright Florian Zeller translated by Christopher Hampton receives a sensitive, elusive and masterful production by Coal Mine Theatre. It is lyrical, captivating and incredibly moving.

We meet André (Eric Peterson) and his daughter Anne (Trish Fagan) in a nice apartment in Paris. She tells him that “we need to talk” and we guess what the talk will be about. He cannot take care of himself; she is moving to London with her new lover and he needs another caregiver. That’s clear. 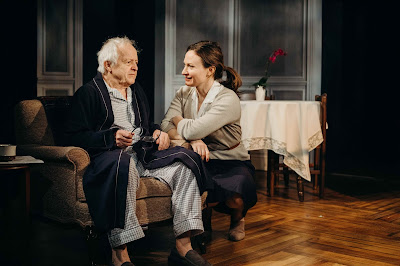 Eric Peterson and Trish Fagan. Photo: Kristina Ruddick
That clarity dissipates when Anne steps out and another woman (Michelle Monteith) who says she is Anne steps in. (Monteith is listed simply as Woman in the program.) A man comes in and André does not recognize him. He states that he is Pierre (Paul Fauteux), Anne’s husband. He and Anne are not separated and he knows nothing about her moving to London. He reminds André that he is living in their apartment and not his own.

We will meet another Pierre (Beau Dixon) and two women who are supposed to be André’s caregiver Laura, (Oyin Oladejo and Michelle Monteith).

Through whose eyes do we see all that is happening in front of us? Are André’s daughters up to something? What about his son(s)-in-law? Is it all in the demented mind of André? We are never sure.

Zeller teases us continually and once he captures our attention in the first few minutes he never lets us go until the very last minute of the ply. I will not spoil the end for you but this is an intelligent, well-constructed and deeply moving play. It is oblique and elusive as if you were walking on quicksand. The Father won the 2004 Moliere prize as France’s best play. 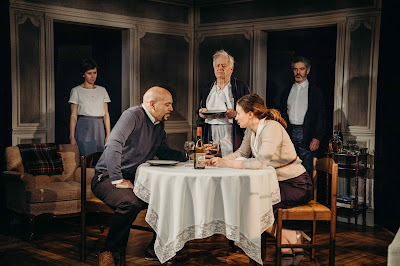 Michelle Monteith, Beau Dixon, Eric Peterson, Trish Fagan and Paul Fauteux.
Photo: Kristina Ruddick
Nicholas Campbell was originally cast as André but was replaced by Eric Peterson in the role of André. He gives an outstanding performance. André is rational and irrational, grouchy, irascible, logical, illogical and a man who is sure of where he is even when he is not there. Perhaps that is the tragedy of dementia.

Trish Fagan is the concerned daughter who tries to deal with a difficult situation. She reaches the point of dreaming of strangling her father. But we are not always sure about her.

Dixon as Pierre is a patient husband who loses his patience and looks for a solution. Fauteux as the other Pierre loses his patience completely and becomes violent. In the program he is listed a Man and we can draw our own conclusion about who he is. The end of the play will give you a clue but you are best left wondering about his identity.

The set by Anna Treusch is a simple sitting room with a table and some chairs. But the furniture keeps changing.

The Father is a small gem of a play which receives a highly laudable production by Coal Mine under the expert hand of director Ted Dykstra. And it’s in a tiny theatre on Danforth Avenue.
___________
The Father by Florian Zeller, translated by Christopher Hampton, opened on February 6 and will run until March 3, 2019 at the Coal Mine Theatre, 1454 Danforth Ave. Toronto, M4J 1N4. www.coalminetheatre.com