These are the facts of the production of Richard II directed by Joe Hill-Gibbins with Simon Russell Beale in the title role at the Almeida Theatre. They do not disclose the fact that it is an extraordinary production and an outstanding portrayal of the hapless King Richard by an actor who seems to have gotten under the skin of the character. 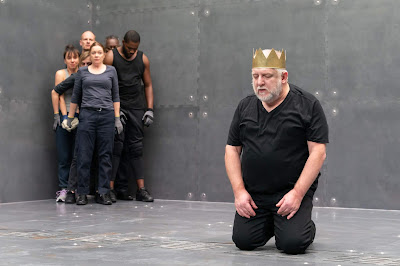 Simon Russell Beale and cast. Photo: Marc Brenner
Beale, dressed in a black t-shirt and black pants with an almost comical crown on his head, presents Richard in all his fundamental weakness, his vacuous arrogance and his insipidity.  Richard in his pathetic shallowness believes that he has been appointed king by God and no human power can remove him from that position.

Beale displays these attitudes and characteristics of Richard without bombast or pomposity. He is God’s chosen and cannot conceive how anyone can question his authority.

The inept king and incompetent leader who wears a hollow crown on an arrogant head is finally defeated by the capable Henry Bolingbroke who becomes Henry IV. Richard delivers a kind of dirge on his life in his final soliloquy which is delivered by Beale with incomparable poetic musicality.

Leo Bill as Bolingbroke provides the necessary contrast to Richard. He is a true leader, decisive, ambitious, efficient and ruthless. He has everything that Richard lacks including the smarts to show remorse at the death of the former king even though he wished it.

Joseph Mydell plays Gaunt and delivers the familiar “this royal throne of kings” speech without sounding like an old man who is about to die. 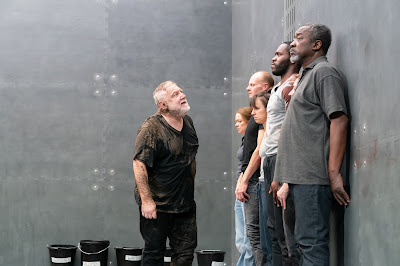 As indicated the actors never leave the stage during the 90-minute duration of the performance and their presence provides a unified picture of the production that is engrossing. Outstanding performances from beginning to end.

The play has been dramaturged by Jeff James and the result with the eight actors on stage is a seamless and quick transition from one scene to the next without losing the central plotline or the strength of this outstanding production.

Hill-Gibbins gives us a Richard II pared down to its essence. He has drawn out the soul of the play and the results is Shakespeare and theatre at their best.
__________