Canadian Stage has very wisely staged a revival of the 2017 Stratford Festival production of Moliere’s Tartuffe. For those who did not see it, a masterly and thoroughly enjoyable production awaits them. For those who saw it, they get a repeat delight.

How is it done?

Let’s look at Chis Abrahams’s directing. He does not so much direct the production as choreograph it. He sets a brisk pace right from the start and he never lets it falter. Proper intonation and expression are essential but Abraham wants more than that. He requires physical agility, body contortions and movements that produce laughter over and above what is expected. His attention to detail does not allow any opportunity for laughter to escape him. This is simply masterly directing. 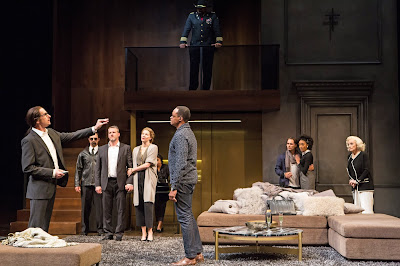 Members of the company. Photo: Cylla von Tiedemann
He has a lot of help from a seriously talented cast.

Tom Rooney as Tartuffe is a man of boundless phony piety and seething lust for sex and wealth. He is such an extraordinary manipulator that he can tell the truth about himself, show remorse at swatting a flea and be caught trying to seduce Orgon’s wife without shaking the latter’s conviction of his piety. And Rooney is funny as he spouts godliness and swills wine.

Graham Abbey’s Orgon is an over-excited dupe who is willing to give his daughter, his wife and his property to the charlatan. Abraham has Abbey run, rant, do pushups and become frantic, all in successful attempts at evoking laughter.

Akosua Amo-Adem as the servant Dorine grabs our attention and laughter from her first appearance and never lets off. She is smart, she is mouthy and she is hilarious. Again, Abraham creates additional comedy by choreographing body language by Amo-Adem that is simply hilarious.

The love interest and youthful vigour are provided by Mercedes Morris as Mariane, Johnathan Sousa as her betrothed Valere and Emilio Vieira as her brother Damis. Michael Blake as Elmire’s brother Cleante is the logical counterbalance to Orgon.

Rod Beattie has the minor role of Monsieur Loyal, the sheriff who delivers the writ of possession for Orgon’s house. His lines are those of a process server but Beattie manages to get a few laughs even from them. 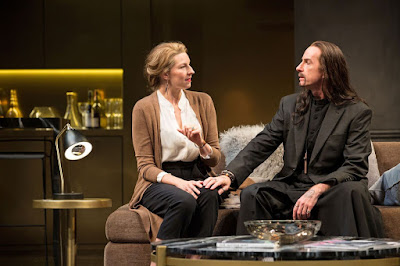 Maev Beatie as Elmire and Tom Rooney as Tartuffe. Photo: Cylla von Tiedemann
Maev Beaty is simply superb as Elmire, the exasperated wife of the fool Orgon. She is highly alluring right from her first entrance and we soon realize that Tartuffe is lusting after her. She needs to rebuff him and then attract him in order to entrap him. The entrapment scene is perhaps the funniest scene in the play as she dodges Tartuffe and maintains his aroused interest in her.

Abraham uses Ranjit Bolt’s fluid 2002 rhyming verse translation of Tartuffe. Rhyming couplets can stick to actors’ tongues and sound awkward to the audience. In this case the translation propels the delivery of the couplets rather than hindering them. The pace is set by Rosemary Dunsmore as Mme. Pernelle in the opening scene. Like most of the characters, she has some long speeches but Dunsmore delivers her lines at a good clip and we are delighted to hear her.

Abraham could not resist adding a good number of references to current events and phrases from fake news, to make our country great again, to #blessed, to unfollow me, to vegan to lock him up.

The production is done in modern dress and set in present-day France judging by the music in the opening scene. The set by Julie Fox consists of a modern living room with a bar area and stairs leading to an upper floor.
_______________

Tartuffe by Moliere in a translation by Ranjit Bolt played from January 13 to 27, 2019 at the Bluma Appel Theatre, St Lawrence Centre for the Arts, 27 Front St E, Toronto, ON M5E 1B4. www.canadianstage.com