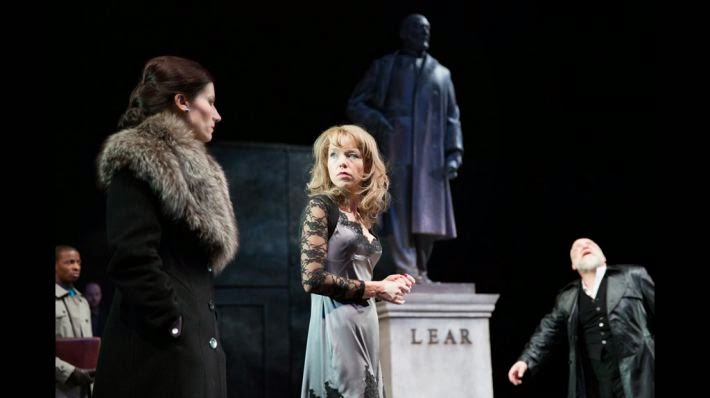 Live telecasts from far off theatres and opera houses have become a regular occurrence and Great Britain’s National Theatre is right in there. This is a godsend for most people who are not likely to attend performances in London or New York as well as other venues around the world. Being able to see both the performance in the theatre and the telecast in a movie house is a rare treat.

I saw Sam Mendes’ production of King Lear on the Olivier Stage of the National Theatre in London last February and caught the telecast of the performance in Toronto as well. I have already reviewed the performance in the theatre (see my posting of March 5, 2014 on this blog) and I want to compare that experience with watching the play in a movie theatre.

Seeing the play on the large screen is a mixed blessing. There are elements that enhance the experience of a seeing a magnificent production and there are some things that are less appealing largely because of the choices made by the Director for Cinema.

In the opening scene of King Lear, we see a man wearing a fedora with feathers on the side sitting on a stool on a ramp that extends from the stage into the audience. When the division of the kingdom ends and Lear sends Cordelia off, the man in the fedora gives her an embrace. We learn that he is Lear’s Fool (Adrian Scarborough).

In the movie theatre, we see the entire stage and have some close-ups but the Fool is not in camera range all the time. It is a minor loss but we do miss a point. The Fool is present as a witness and perhaps alter ego of King Lear from the start. 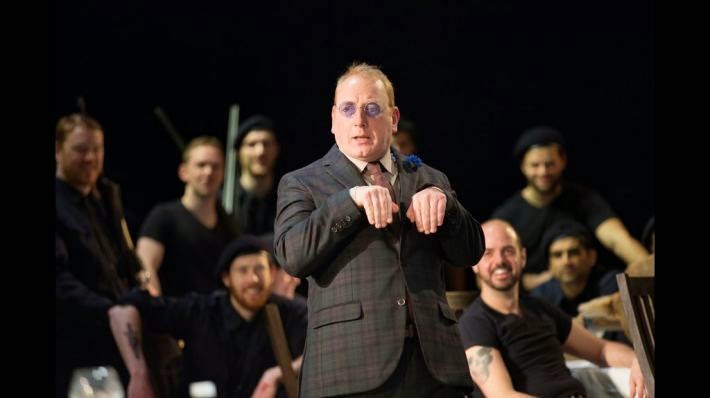 The biggest advantage of the movie theatre over a live performance is the opportunity to see facial expressions that are difficult to notice from ten or twenty rows away from the stage. Simon Russell Beale gives a monumental performance as Lear. He is superb in the opening scene where as a stocky, stooped and raging dictator he fulminates first against Cordelia (Olivia Vinall) and later against Goneril (Kate Fleetwood) and Regan (Anna Maxwell Martin).

When Lear descends into madness, Russell Beale’s performance takes on the dimension of a great performance. His body, his voice, his face and his eyes, especially his eyes, combine to give an astounding representation of a demented person. Most of this is visible in a live performance but watching close-ups made it even more impressive.

This holds true for many scenes where the closer look at expression, physical appearance or action increase our appreciation of the production. But there is also a downside. The actors are speaking in their live theatre voices. That means they are addressing the people in the back row and there is no room for speaking softly.

Director for Cinema Robin Lough is fairly judicious in his shots but there were a few glitches and some infelicitous angles. When Lear embraces Cordelia, his microphone produced some unpleasant sounds. Mercifully, it did not last long. There are a number of stabbings in the play and the stabbers are armed with what looked like butter knives and they thrust as if they were, well, cutting butter. The stabbings appeared weak during the live performance but they were even worse in the movie theatre.

The solution is simple: would that we could see both.

The broadcasting of concerts and operas from around the world is on the increase and despite fears that it will affect sales of tickets locally I think it is quite positive trend. We will no doubt see more theatre productions from English-speaking countries. The next step will surely be to let us see major productions from non-English theatres with subtitles. How about something from the Comedie Française?
__________

King Lear by William Shakespeare was transmitted Live from the National Theatre, London, England on May 1, 2014 at the Coliseum Scarborough Cinemas, Scarborough Town Centre, 300 Borough Drive, Scarborough, ON, M1P 4P5, (416) 290-5217 and other theatres across Canada.  For more information: www.cineplex.com/events