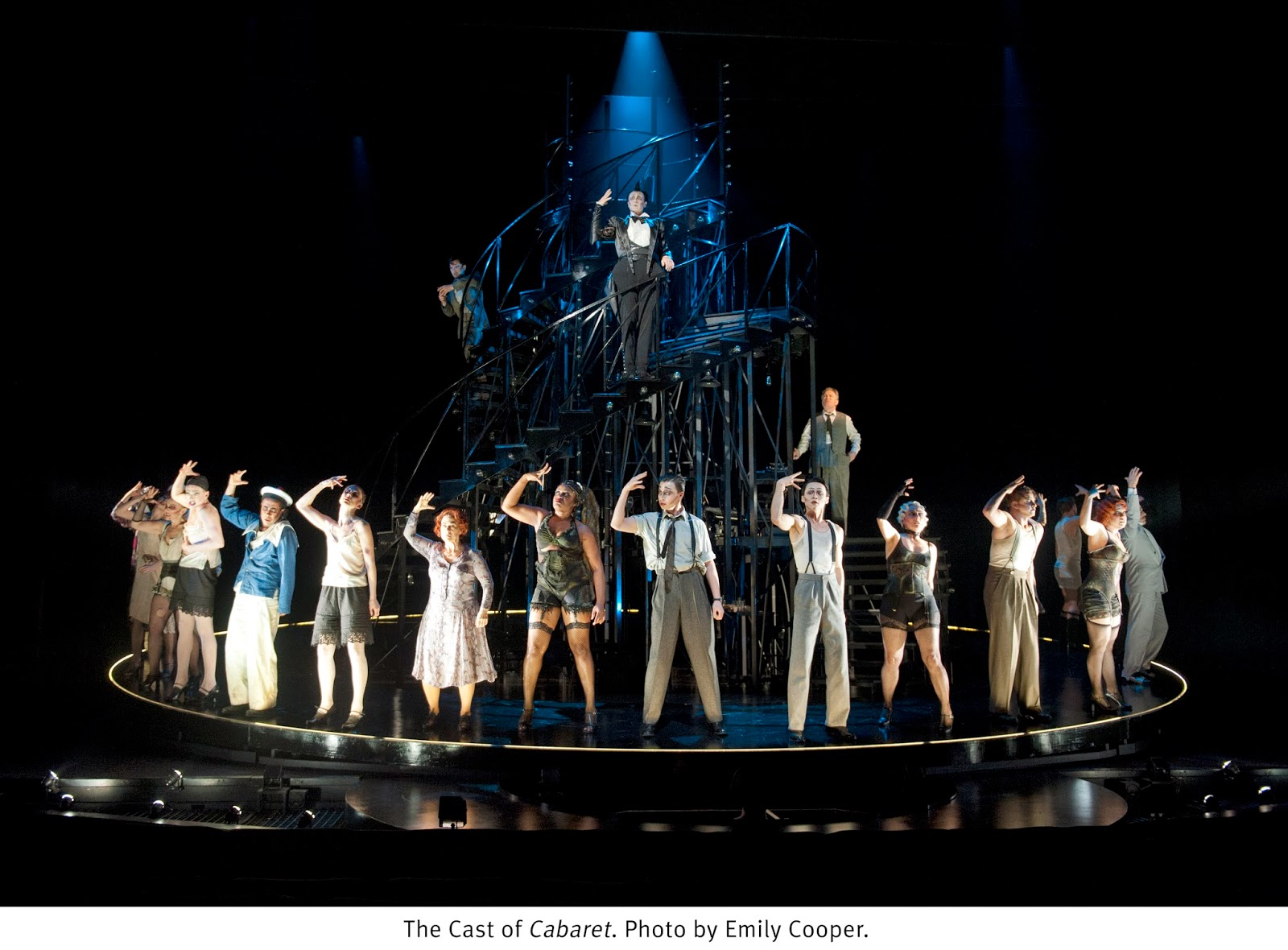 For the big musical of this year’s Shaw Festival, Artistic Director Jackie Maxwell has chosen Cabaret, the 1966 musical about the coming of the Nazis in Germany. It is a bold choice boldly executed.

The musical has gone through numerous productions and transformations but Maxwell has chosen the 1998 Broadway revival directed originally by Sam Mendes and co-directed and choreographed by Rob Marshall. The Shaw Festival production is ably directed by Peter Hinton.

When the play opens we see several iron staircases converging into a tower on a revolving stage. It could be the Tower of Babel (the Emcee makes a pint of singing in several languages) or the tower of evil and depravity.

The tower with its landings and lit beams serves as the tawdry Kit Kat Club, the slummy boarding house run by Fraulein Schneider and other incidental locales. The back of the stage is dark and spotlights are directed on the actors. It is a grim, dingy and scary world. In the second half a rock is tossed through the window of a fruit store operated by Herr Schultz, a Jew, and there is a burst of light at the back of the stage. After that red lights dominate the rear stage and a swastika hangs prominently on the wall. Hell has arrived.

The physical representation of Berlin in 1930 is of course matched by the people who inhabit it. On the political side we see the rise of the Nazis and anti-Semitism including a severe beating of the central character, Cliff, the prohibition of a marriage between a German and a Jew and the hint of the horrors to come.

On the personal level, the world of Berlin, with some exceptions, is one of depravity, seediness, violence and ugliness.

The moral centre is held by Cliff Bradshaw (Gray Powell), an American writer who has come to Berlin to write a novel. He unwittingly helps the Nazis, falls in love with Sally (Deborah Hay), an English woman who sings at the Kit Kat Cub and moonlights as a prostitute. Cliff is bisexual but his love for Sally is genuine. She becomes pregnant but does not know who the father is. He is bludgeoned by the Nazis and leaves Germany but does write his novel. 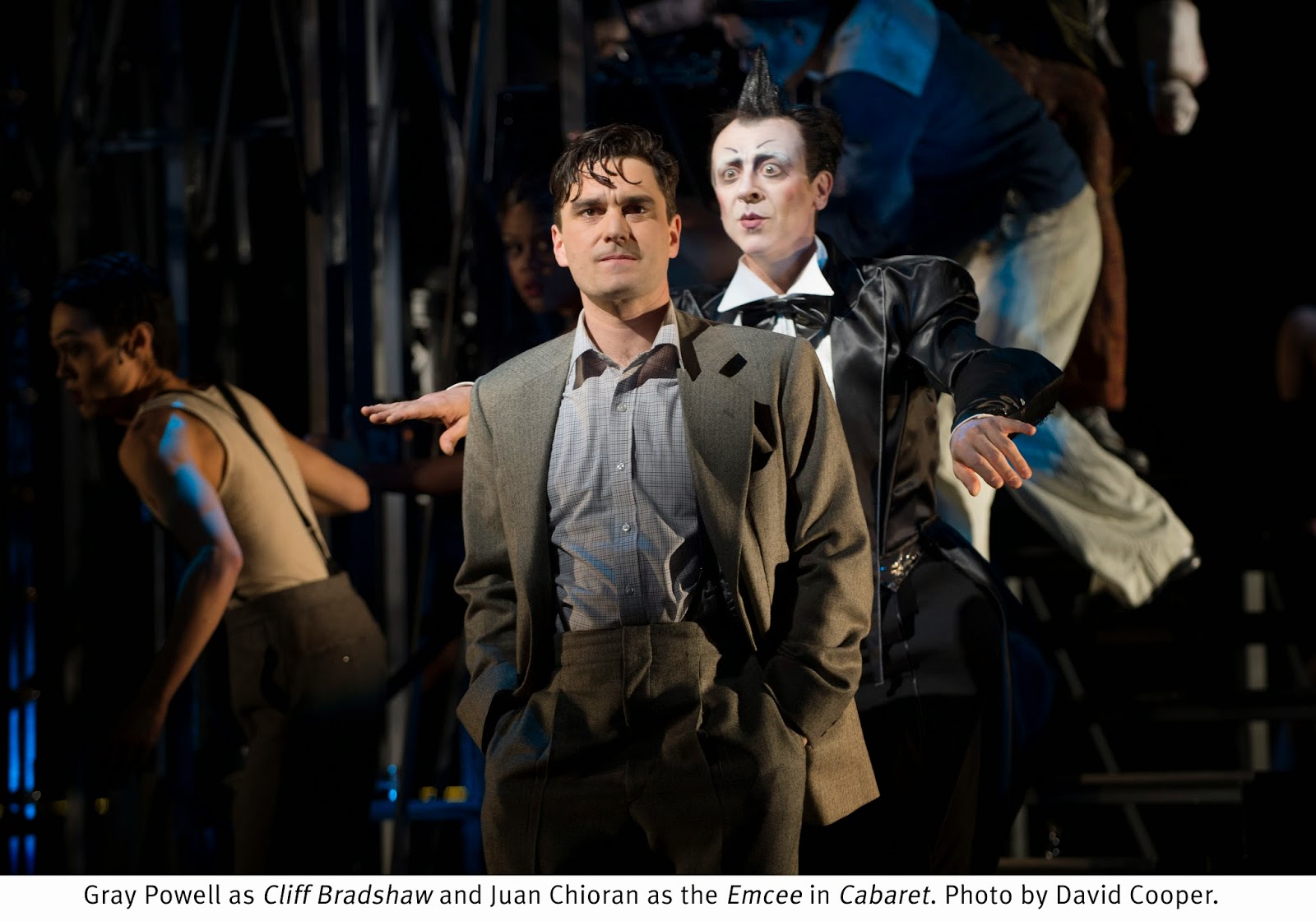 Herr Schultz (Benedict Campbell), the decent fruit vendor, is not so lucky. He is an optimist and thinks that the situation will blow over. Fraulein Schneider (Corrine Koslo) will not marry him – all her friends are Nazis!

The basic plots of Cabaret derive from the stories of Christopher Isherwood which were adapted into a play called I Am A Camera by John van Druten. Joe Masteroff wrote the book based on the play and John Kander composed the music to lyrics by Fred Ebb.

The music, of course, is what takes Cabaret away from being just another story about politics, love and depravity in Weimar Berlin or any other place. The dark, tense, edgy, blunt music creates a claustrophobic atmosphere full of terror, evil and ugliness. From the first appearance of the Emcee (Juan Chioran) with his painted face and spiked hair, singing “Willkommen” to the depraved lives of the characters, Cabaret gave me the feeling of people living as if the end of the world is imminent; the Titanic had struck the iceberg and is about to sink.

Supreme irony is reached when we hear “Tomorrow belongs to me” that starts with a folksy melody and bucolic lyrics about the sun in the meadow and the stag in the forest. It ends by asking for a sign from the Fatherland. The sign that it beckons is the swastika and the future belongs to the Nazi nightmare.

I have spoken mostly about the Mendes-Marshall conception of this great musical as executed by the Shaw Festival under the direction of Hinton. The musical direction is by Paul Sportelli and the set is designed by Michael Gianfrancesco.

Without taking anything from the individual performers, I think the whole is more important than the parts in this instance.. Chioran is animated, seedy and excellent – just what you would expect from an Emcee. Gray Powell and Benedict Campbell are almost the straight men in this collection of reprobates and they are good at it. Excellent performances by Deborah Hay and Corrine Koslo.
Go see it.
______