ARMS AND THE MAN - REVIEW OF SHAW FESTIVAL PRODUCTION 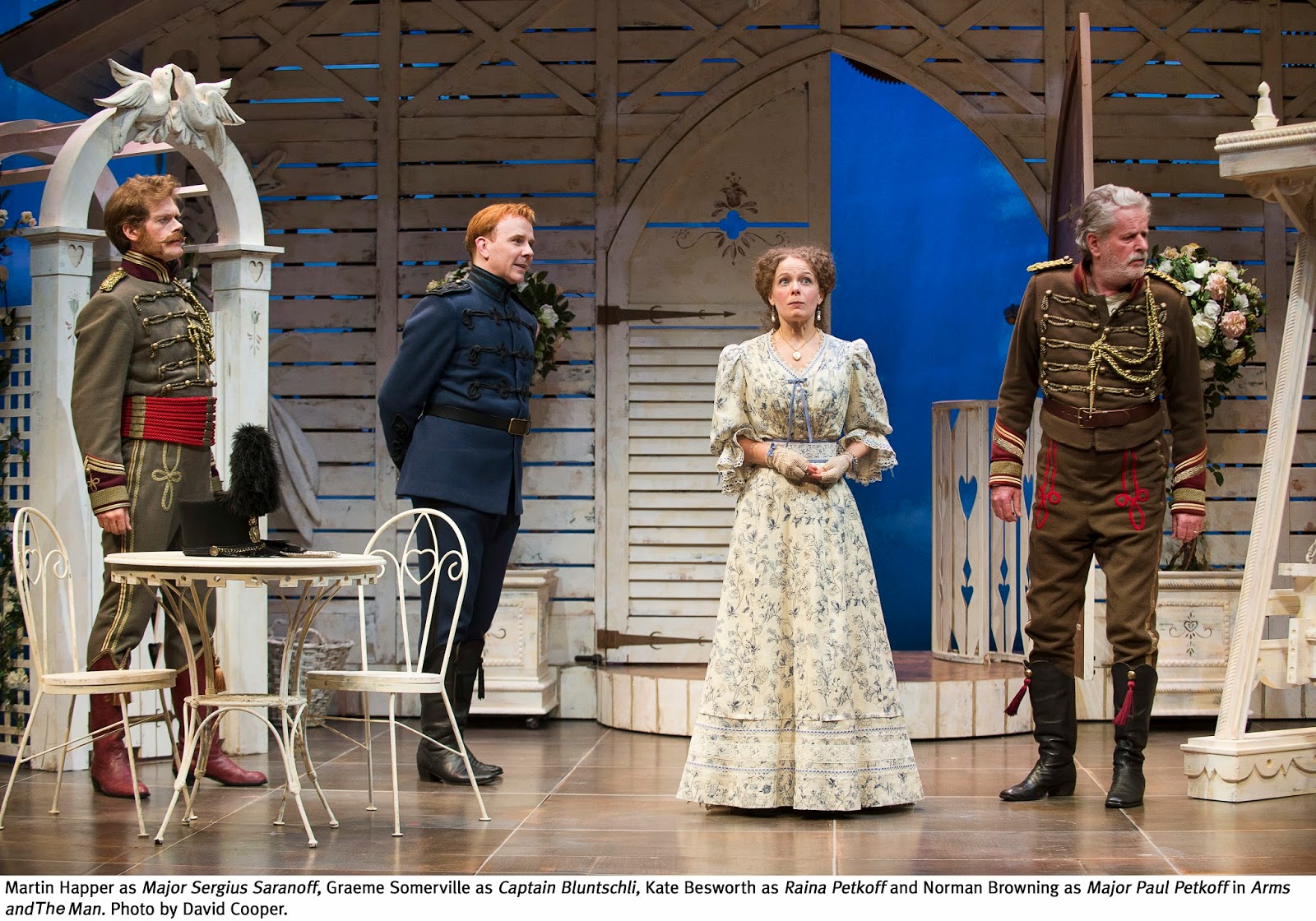 Bernard Shaw gets only two pieces of this year’s Shaw Festival pie but his ghost is surely used to holding a minority position even if the festival is named after him.  The Philanderer and Arms and the Man are his two of the ten plays that make up the 2014 season.

Arms and the Man receives a fine-tuned and thoroughly enjoyable production directed by Morris Panych at the Royal George Theatre. The cast is well-coordinated and gets the laughs and finer points of the play that is a take-off on romantic ideas of military glory, patriotism, militarism and Bulgaria.

The Serbians (led by the Austrians) are at war with the Bulgarians (led by the Russians) and Captain Bluntschli, a Swiss mercenary seeks refuge in the bedchamber of Raina Petkoff, a Bulgarian lady. He is fighting for the Serbians and the enemy is on his heels.

Graeme Somerville as Bluntschli must be realistic, practical, capable and, in the end, perhaps even more romantic than his supposed antithesis, Major Sergius Saranoff.  As a soldier he prefers chocolates to ammunition and survival to glory. Quite so, but as a youngster he ran away from home and joined the Serbian forces because they were the closest to his home.

The contrasting and in a way similar character to Bluntschli’s is Saranoff, a Byronic figure who leads a victorious cavalry charge that entitles him to admiration, glory and the Higher Love from Raina. Martin Happer strikes the proper poses and attitudes as the heroic major who practices a somewhat lower love in his lust for the servant Louka. In the end we see Saranoff’s practical side as well and enjoy Happer’s performance.

Kate Besworth as Raina is the woman in the centre who dreams of glory and pure love with Sergius while having a practical side as well. Besworth gives us a fine Raina but I found her hairdo jarring. I have no idea what style Bulgarian women went for in the 1880’s (not that the play is trying to give us a representation of Sofia high society) but her hairstyle seems inappropriate.

Peter Krantz as the servant Nicola and Claire Jullien as Louka were very good and gave us the laughs assigned to them Norman Browning made an excellent Major Petkoff, the incompetent, highest ranking officer in the Bulgarian army who is dominated by his wife Catherine, played well by Laurie Paton. 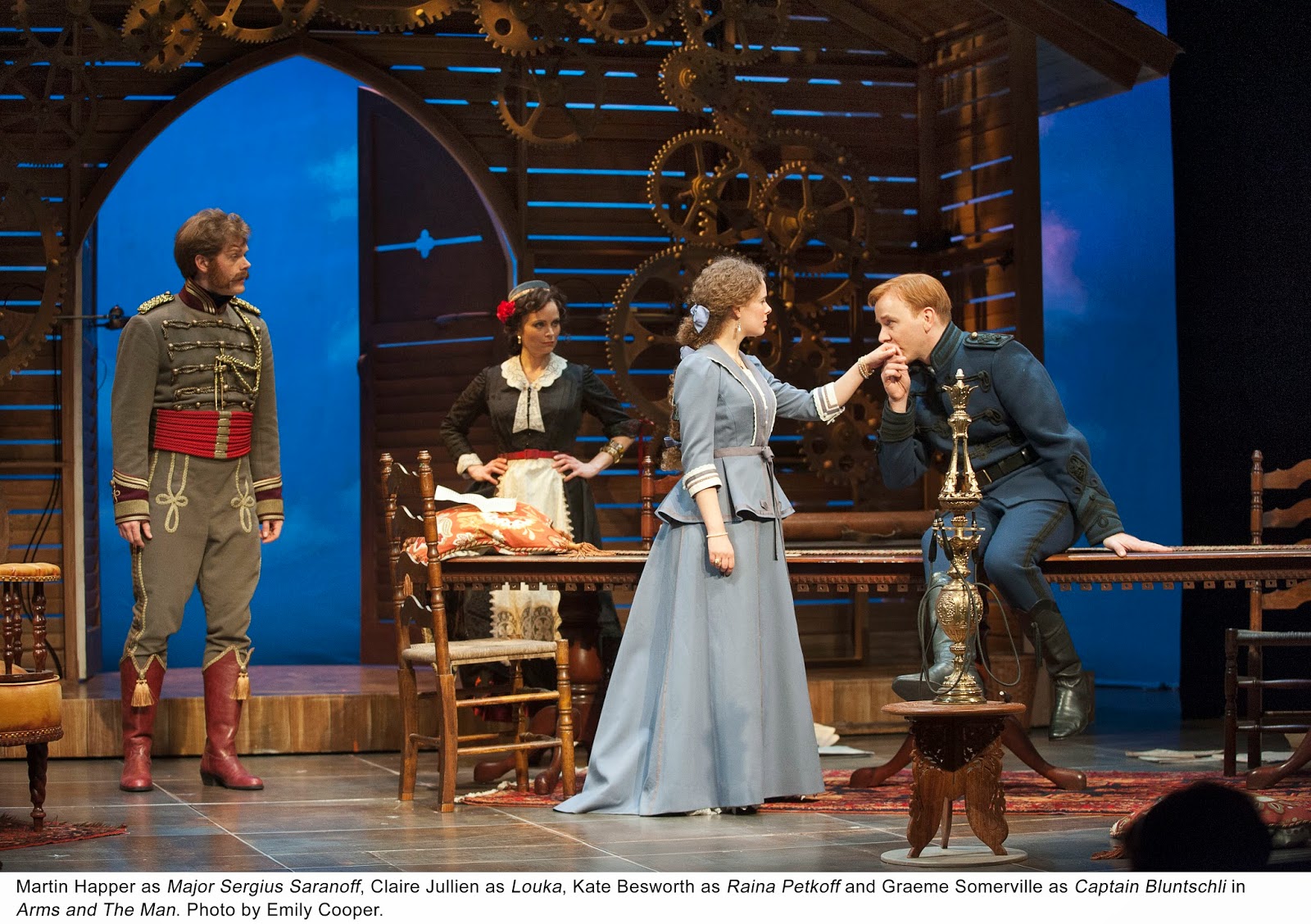 Panych adds many fine comic touches to the play. In the opening scene, Raina is looking out of her room onto the battle in the street. Set designer Ken MacDonald creates a revolving balcony so that we can “see” what is happening outside in the street as well as inside Raina’s bedroom. Soldiers rush around the theatre and we see Bluntschli escape into the bedroom. A very effective touch.

Aside from that, MacDonald’s sets left me cold. The bedroom and the garden in the Petkoff house boast exposed brick walls that reminded me of the hideous architecture of the 1960’s.

The Petkoff library looks like a log cabin from the Old West with some wheels that turn when the bell is rung. There are no books even though this is the only library in Bulagria. The set should either enhance the production or leave it alone. These sets did neither.

We are treated to some Bulgarian folk songs (I think) as we look for our seats. I was not paying much attention to them until I heard the familiar Greek song “Tsifteteli Tourkiko.” What is that doing in this play?

And speaking of ethnic sensitivities, Arms and the Man cannot be recommended to Bulgarian patriots. See it; have a few laughs and stand up for your country!
______

Arms and the Man by Bernard Shaw continues until October 18, 2014 at the Royal George Theatre, Niagara-on-the-Lake, Ontario. www.shawfest.com.