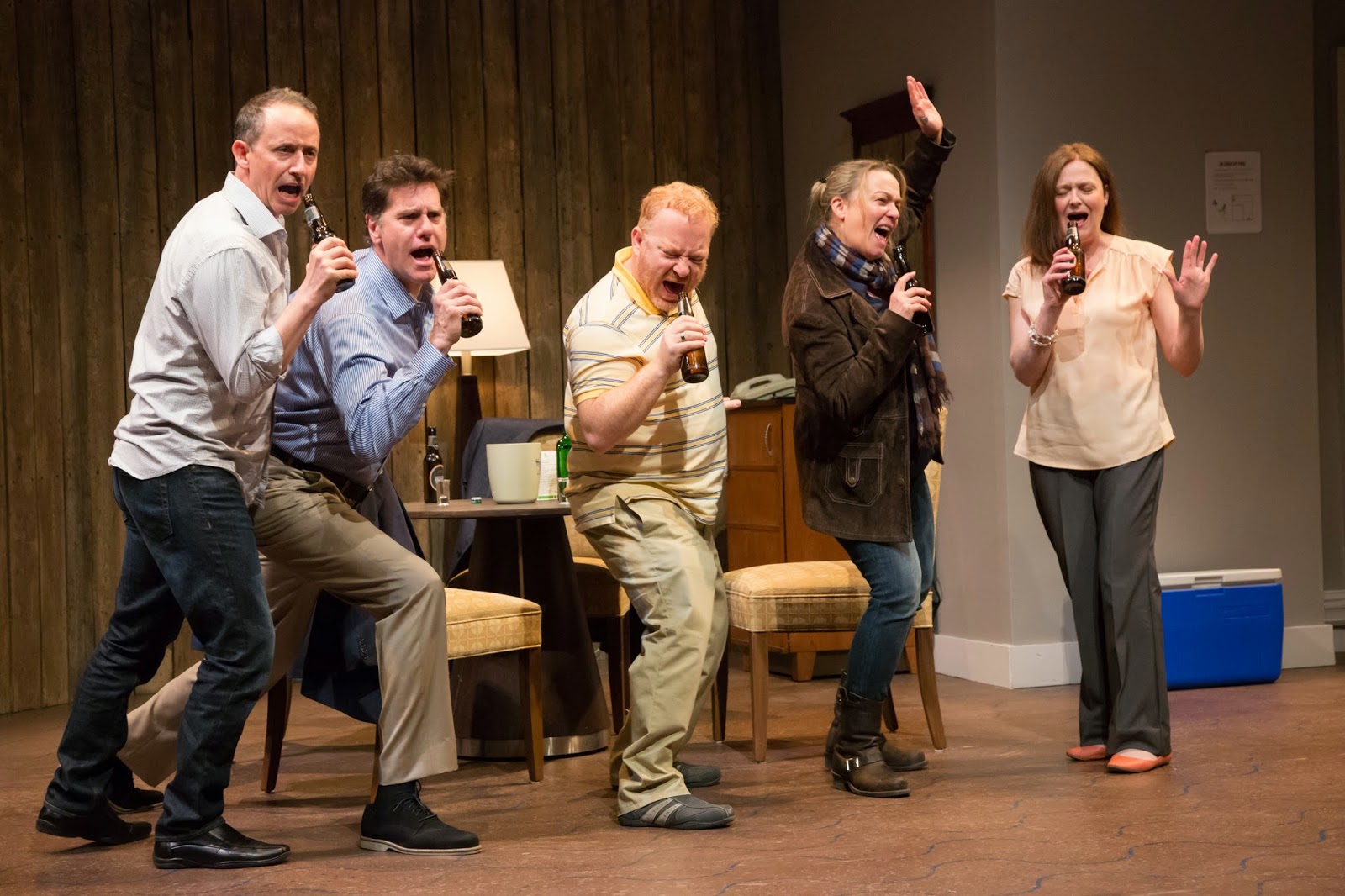 Nostalgia, those wistful reminiscences of times past when the world was young, the sun was always shining and all our future was ahead of us. Remembering the past, coming to terms with the present and perhaps glancing at the future are the themes of Daniel MacIvor’s Bingo!, now playing at the Factory Theatre.

Thirty years after graduation from high school in Cape Breton (it’s not mentioned but we can guess it), three friends get together in a hotel where they are celebrating a class reunion. Paul (John Beale)l is a shy engineer who has returned from Calgary for the occasion. Doug (David Keeley) is a real estate agent working in Halifax. He lies to his wife and is a braggart about his achievements as a salesman. Jeff (Dov Mickelson) is a “swinger” who would have preferred to have children but his wife barred such thoughts.

There are two women in the play: Kathy is a lonely and shy woman who has not found a lasting relationship with a man. Laura (Jane Spidell) is a mail carrier and just as lonely as Kathy. She finds some fulfilment by being a foster parent to children in Africa. All the characters have nicknames but I am using their real names.

That is an interesting collection of people and there is a play in them as they look back to their golden years in high school, reveal their present situation and give us a glimpse of their hopes for the future – what is left of it or the “first day” of what is to come.

The main preoccupation of all of them is drinking. In the first act the men are gulping booze in the hotel room, punching each other in the stomach and going on with a forced enthusiasm that is of limited appeal. Drunks are rarely amusing for long. The aim of their drinking is to reach the “bingo” stage when one of them runs to the bathroom and vomits. That certainly sounds like a barrel of fun. 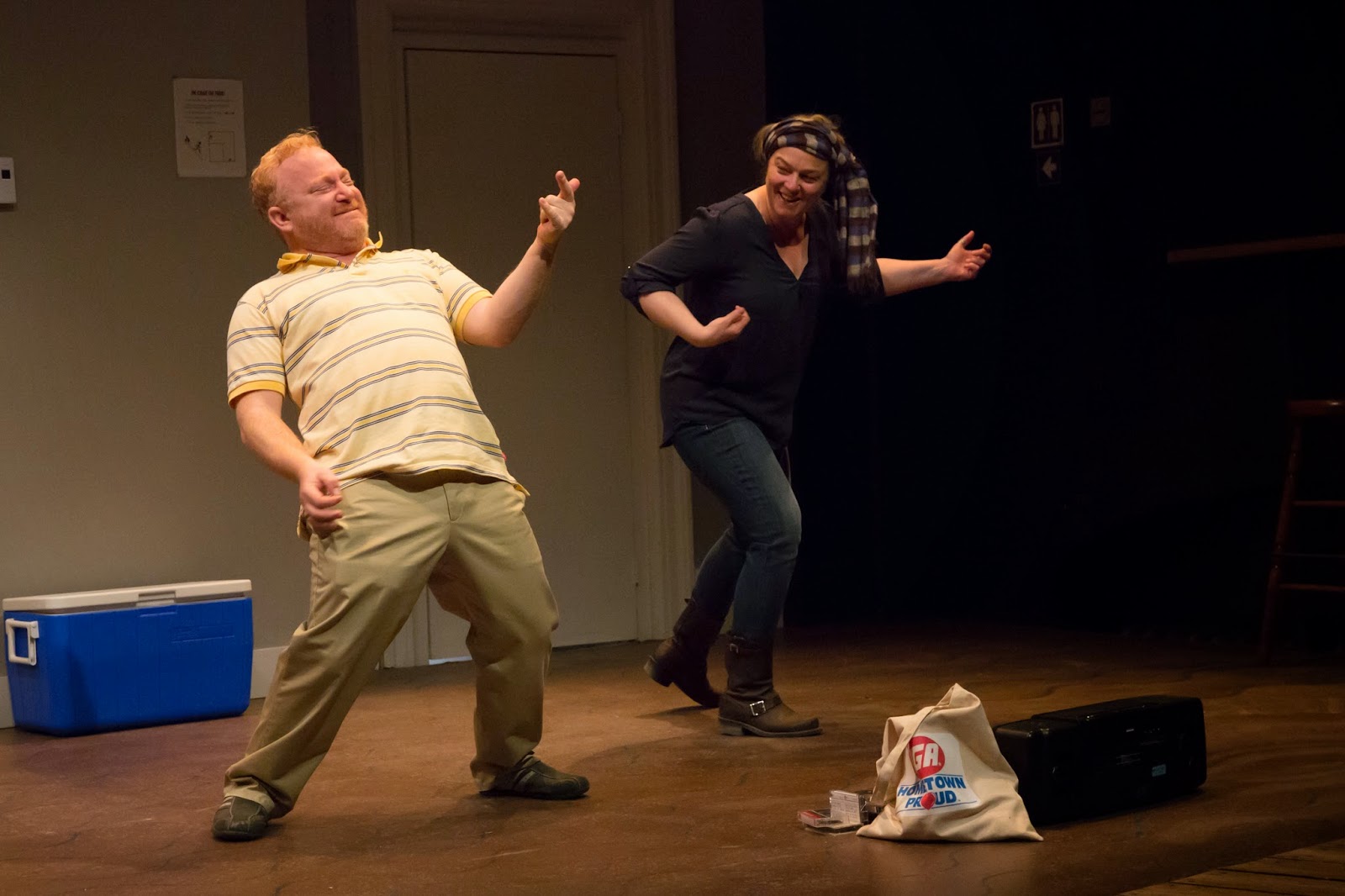 We meet the women in the hotel bar where the reunion is held. They are more subdued than the men and we learn about their past and present. They are lonely and sympathetic. The golden years of their high school are perhaps brighter in memory than they were in reality and the present does not amount to much nor does the future hold a lot of promise. Kathy has been left emotionally scarred because she did not finish high school because she did not want it to end.

The five get together in the hotel room where through the miasma of excessive drinking we get more nostalgic memories and revelations. Jeff’s swinging lifestyle includes posting pictures of his private parts on the internet. His wife may be out for the evening swinging and posting without him.

Doug’s wife finds out that he is deceiving her and that is his third strike. He is out, as he told us at the beginning.

There are some good lines, some fast-paced dialogue, some forced roistering and lots of drinking as the play moves towards its conclusion. There is a lyrical scene at the end as Paul and Kathy sit on the boardwalk by the sea watch the moon and the two shy people connect for a “happy ending”.

MacIvor sketches out his characters quite nicely. They are recognizable people and we have some empathy for all of them except for the philandering real estate agent, I suppose. The actors do an excellent job in conveying these people. Director Nigel Shawn Williams does a very good job with the cast.

Lindsay Anne Black’s set is simple and effective. A hotel room with a couch, a table and a bar provides the drinking venue for the men. To the right is the hotel bar where the two women meet. There is no break between the two locations. Stretching from the left of the stage and running across the front is the boardwalk where the last scene will take place. Again, there is no brake and we only realize that it is the boardwalk when Paul and Kathy sit on in the final secene.

The play, for all its charm and sympathetic people “remembering” the past, is rather thin on plot. There are hints that Jeff may have seen the light and will give up his swinging life and, I guess, Laura may hook up with him; Doug will be thrown out on the street by his wife. Paul and Kathy will live happily ever after. That is all good but it is not enough to make for a completely satisfactory play.
____

Bingo! by Daniel MacIvor opened on May 8 and will run until June 1, 2014 at the Factory Theatre, 125 Bathurst Street, Toronto, Ontario. www.factorytheatre.ca.
Posted by James Karas at 10:53 PM