CRAZY FOR YOU – REVIEW OF STRATFORD FESTIVAL PRODUCTION 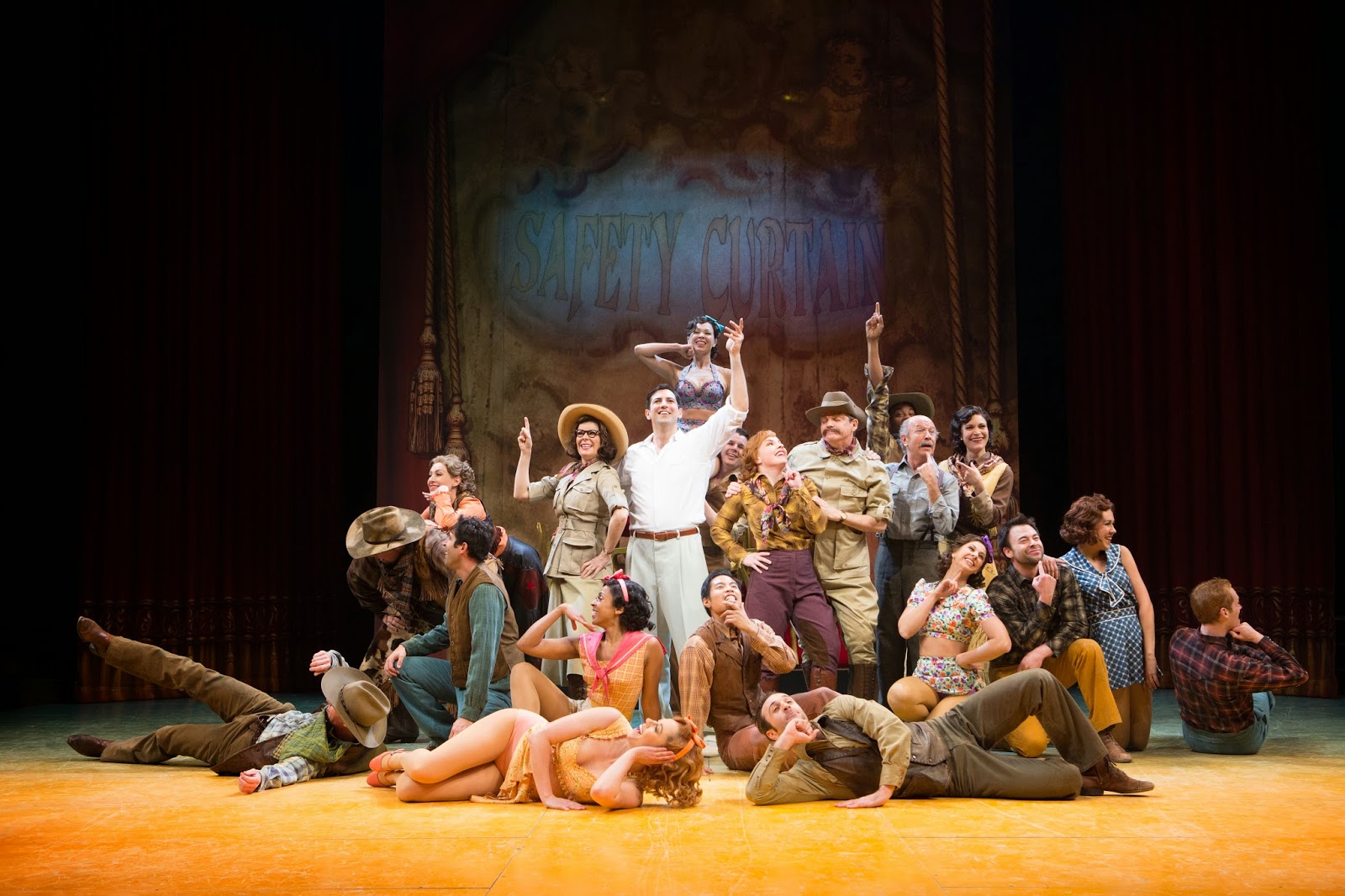 Members of the company in Crazy for You. Photo by Cylla von Tiedemann.

“Who can ask for anything more?”

Those are the final words of Crazy for You as the audience erupts into yet another round of enthusiastic applause as if to say that they are perfectly delighted with the Stratford Festival production.

There are good reasons for the ovation but no doubt there will be some people who will ask for more, others who will demand less and many who will not ask for anything more.

The 1992 musical by George and Ira Gershwin with book by Ken Ludwig is directed and choreographed with riotous liveliness by Donna Feore who creates enough energy to light up a city. Think of the battery bunny on an overdose of uppers.

The plot is vintage depression era romantic musical with corny jokes, obvious plotline and paper-thin characterization. Bobby Child (Josh Franklin), a Harvard educated banker is sent by his rich mother (played by Lally Cadeau) to Nevada to foreclose on a theatre. Bobby really wants to be a song-and-dance man and when he arrives in Deadrock, Nevada he impersonates Bela Zangler (Tom Rooney), a theatrical producer. Bobby as Bela falls in love with Polly (Natalie Daradich), the daughter of the owner of the theatre. The rest is song, dance and comedy of the highest order. Can you guess the ending?

I may have understated the energy created by Feore’s choreography and the robust dancing of the amazing cast. The Follies Girls and the Cowboys present disciplined acrobatics and vigorous gymnastics that grab the audience and keep them enthralled. I use the words acrobatics and gymnastic to describe the breadth of the performances without diminishing them into Olympic events. The gold medals are for dancing.

The ensemble singing is quite splendid. The solo singing is not as successful. Franklin is a big man but he danced and sang with grace and ability. Daradich was not quite as successful vocally. She did not quite have the range to give us a completely satisfactory rendition of “Someone to Watch Over me” where the singer needs to soar but she was satisfactory in most of her other numbers. She has a luminous face and a lively acting style making her a delight to watch. 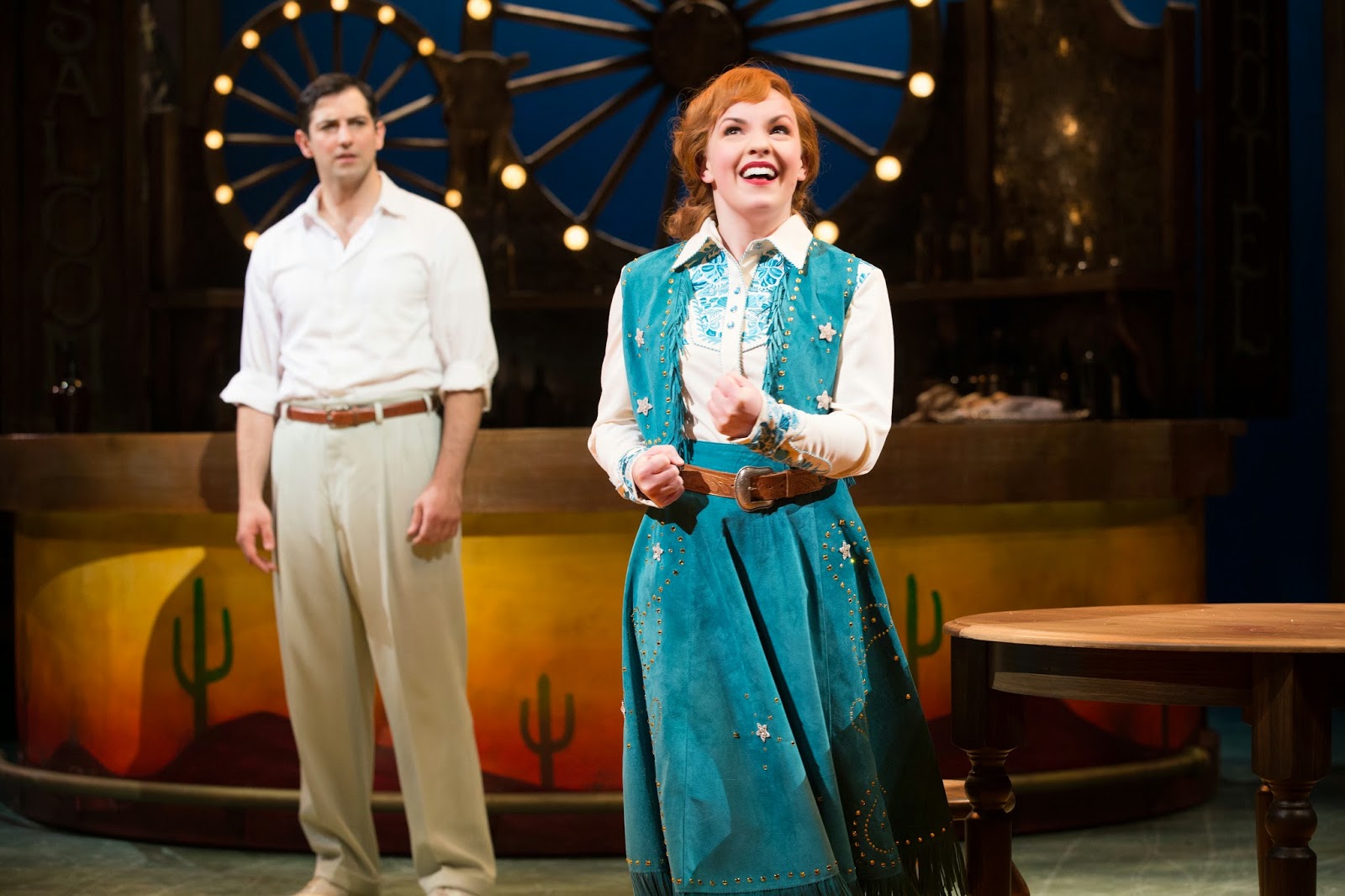 Josh Franklin as Bobby Child and Natalie Daradich as Polly Baker in Crazy for You. Photo by Cylla von Tiedemann.

The comedy even when corny was enjoyable. “You are close to an idiot” says one character and the other moves away. “I didn’t come here to be insulted” she says and he asks her “Where do you usually go?” You get the idea.

Bobby pretending to be Bela and the real Bela inevitably meet and have an extended drunk scene. They are dressed identically and they perform in the bar with some athletic jumps and considerable hilarity in bravura comic performances. Some people may find it overdone.

Monique Lund and Shawn Wright play Patricia and Eugene Fodor presumably of tourist guides fame. They are eccentric English tourists with bad English accents but ridiculous enough to get laughs.

Robin Hutton plays Irene Roth, Bobby’s unwanted fiancée. She wants to marry him; he wants to go into show business. She is an object of ridicule of course but she proves that she can sing. Stratford veteran Keith Dinicol plays Polly’s father Everett to good effect.

Crazy for You was put together in 1992 but the Gershwins’ music and lyrics are from the 1930’s.  They don’t make them like they use to, that is to say a musical with a pleasant albeit predictable plot, humour, beautiful melodies, and dancing and energy to give you your cardio exercise right in the theatre.

Crazy for You by George Gershwin (music), Ira Gershwin (lyrics), Ken Ludwig (book), opened on May 27 and will run in repertory until October 12, 2014 at the Festival Theatre, Stratford, Ontario. www.stratfordfestival.ca
Posted by James Karas at 11:55 AM