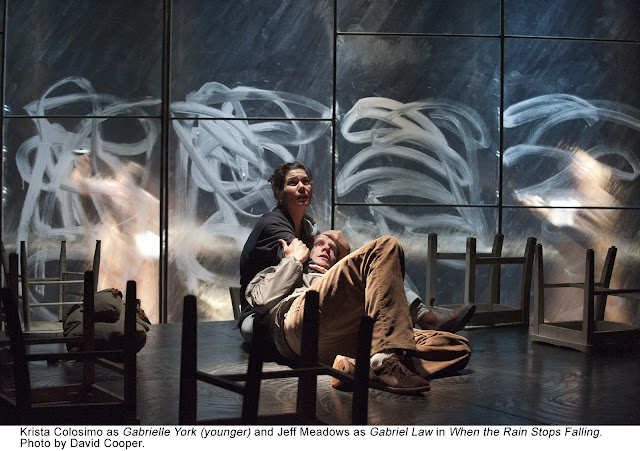 The Shaw Festival’s final production during its fiftieth anniversary is When the Rain Stops Falling, a riveting piece of theatre by Australian playwright Andrew Bovell. It is an ingeniously constructed play that builds to an incredible climax. Much of the strength of the play lies in its architecture but it does have an inherently dramatic plot.

The play deals with the intertwined story of two families covering the period between 1959 and 2039. It takes place in London, the Coorong and Uluru, Adelaide and Alice Springs, Australia. That is a lot of time and space to cover with nine characters two of whom are shown as young and old especially when their story is not told chronologically.

The play opens in 2039 with Gabriel York (Ric Reid), a middle aged man, standing on a large table and letting out a scream. It is raining heavily and a fish falls out of the sky. The world is in a strange state and there are indications that the end may be near. Gabriel receives a call from his estranged son Andrew and he makes arrangements to meet him.

The play will move back and forth in time and place as the family histories are slowly revealed. One of the men is a pedophile and he is thrown out of his house by his wife before the police arrests him. He ends up in Australia. He goes to a beach and a seven-year old child is abducted and murdered.

His son Gabriel goes to Australia to look for his father and meets Gabrielle and they marry and have a child. We find out who the murdered little boy is (I am deliberately not disclosing details in order not to ruin the effect of the pay.) It is a mystery and the way the family secrets are revealed constitutes one of the main attractions of this difficult but intriguing play.

The son of Gabriel and Gabrielle is also named Gabriel. He is the first person we see in the play, living in a one-room flat in Alice Springs and looking for his son. His father went from England to Australia to look for his father and made some extremely unsettling discoveries.

Henry Law and Elizabeth Law in their youth are played by Graeme Somerville and Tara Rosling. Donna Belleville plays Elizabeth as an older woman. Their son Gabriel Law is played by Jeff Meadows. He will go to Australia and fall in love with Gabrielle from the York family whose story is told in the play.

Performances are superb from Rosling as the distraught young Elizabeth to Belleville as the older, alcoholic Elizabeth that has some devastating secrets to hide.

Krista Colosimo is the spirited young Gabrielle and Wendy Thatcher the older, demented Gabrielle who is married to Joe Ryan (Peter Millard).

The play has a wealth of historical and literary references as well as symbols. The personal stories are interwoven with references to historical events. It is a beautifully written, richly textured play that grabs your attention and holds you enthralled for the more than two hours that it lasts, with no intermission.

What a rare and wonderful find for the Shaw Festival! The play premiered in Adelaide in 2008 and has already been produced in London and New York. This is its Canadian premiere and a major accomplishment for Artistic Director Jackie Maxwell.

The loudest applause must go to director Peter Hinton who takes on a complex play and delivers a great night at the theatre.
___

When the Rain Stops Falling by Andrew Bovell opened on August 26 and will play until September 17, 2011 at the Studio Theatre, Niagara-on-the-Lake, Ontario. www.shawfest.com.
Posted by James Karas at 1:47 PM