EXCEPTIONAL PRODUCTION OF THE PRICE FROM SOULPEPPER 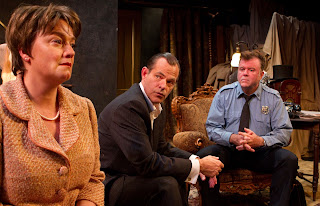 Arthur Miler’s The Price has, as its title suggests, a great deal to do with money and the value of things and relationships. It is an excellent and perhaps even a great play and Soulpepper has given it an exceptionally good production under the direction of Diana Leblanc.

The Price tells the story of the Franz family whose fortune was lost in the 1929 stock market crash. Before that, the Franzes were a wealthy couple, with a finely furnished house, a chauffeur and social status in New York’s society. Their two sons were highly intelligent and destined for great careers. All that came to an end when the money was lost and the father became emotionally paralyzed and sat in an easy chair staring into space much of the time.

The play tells the story about the relationship between the two brothers, Victor (Michael Hanrahan) and Walter (Stuart Hughes) and their relationship with their father. After the crash, Walter left his father to his fate and became a successful and wealthy surgeon. His family life was not as successful and he ended up divorced, estranged from his children and living alone.

Victor chose to stay at home and support his father. He did not have enough money to finish university and became a policeman. Both brothers have a lot of emotional issues to deal with when they meet for the first time since their father’s death. Their father died sixteen years ago and the play deals with the meeting of the brothers in order to sell the contents of their father’s house to an old and colourful Jewish furniture dealer named Gregory Solomon (David Fox).

The strength of the production and the play is the balance that it maintains in the arguments of the two brothers. Victor takes the high moral ground of having sacrificed his career in order to attend to his father. He is bitter about that and about Walter not giving him $500 to complete his university degree. Walter counters with the fact that their father had money stashed away which he refused to give to Victor. Walter had telephoned their father and told him that he had changed his mind and was prepared to give the money to Victor. The father never told Victor of the phone call.

It is this constant emotional seesaw that keeps the audience riveted to the play. The old furniture dealer has a marvelous sense of humour amid his own emotional baggage and provides some dramatic contrast to the attitudes of the other characters.

Victor’s wife Esther is caught in the middle trying to negotiate a peaceful end to the feuding and to deal with her own problems.

Hanrahan is superb as the bitter, resentful and confused cop who feels he has done the noble thing. His brother consistently disabuses him of that illusion and points out that the choice he made was not based on love or noble sentiments. There was no love in their family, only paternal selfishness and manipulation, according to Walter.

Walter’s choice to become a great surgeon and acquire wealth was not a great choice either. He is a lonely man and envying his brother’s apparently happy family life. Stuart delivers Walter’s humanity and attempts at reconciliation with superb emotional control and forthcoming humanity.

Solomon is a comic and wise character, almost ninety year old with a checkered past. Fox is simply outstanding in the role. Jane Spidell gives us an Esther who is worried, troubled and probably an alcoholic who is trying desperately to achieve some emotional and financial equilibrium.

Philip Siler’s set design is excellent with the large array of furniture and furnishings indicating past wealth and comfort.

The only complaint I have about Leblanc’s directing is the slow pace of the opening scene. She treats it like a play by Pinter where there are too many and far too long pauses. Pick up the pace, please. We can get the message and the effect of the play without waiting that long for the next line.

An outstanding night at the theatre.