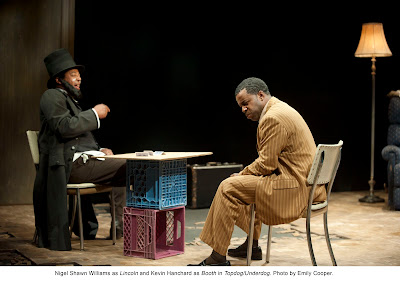 The Shaw Festival added a fourth stage, the 202-seat Studio Theatre, two years ago to produce “a new stream of programming” according to Artistic Director Jackie Maxwell. Two plays are staged there this year, namely Topdog/Underdog by Suzan-Lori Parkas and When The Rain Stops Falling by Andrew Bovell.

Topdog/Underdog is one of those extraordinary works that you see and wonder why in the world it has not been produced sooner in Canada? The play premiered in New York in 2001 and won the Pulitzer Prize for Drama, the first time by a black writer. It received its Canadian premiere at the Shaw Festival in a production in association with Obsidian Theatre.

The play has two characters, brothers pointedly named Lincoln and Booth, and takes place in a seedy rooming house. They are black.

Lincoln (Nigel Shawn Williams) plays the 16th president of the United States in an Arcade where he is constantly being shot. He is supposed to be sitting in a theater and his assassination is constantly re-enacted, so to speak.

His brother Booth (Kevin Hanchard) is unemployed but he does have an apartment where both of them live. Booth is practicing 3-card monte, the game where a player shuffles three cards and people bet on picking out the winning suit. He has perfected the art of shop-lifting and returns to his apartment from a shopping spree with an amazing amount of booty.

The men come from a broken home where the parents more or less left them to fend for themselves. Lincoln recalls his father taking him on his adulterous ventures and at times letting him watch and at one time even partake. Booth recalls his mother being bent over and having sex in the kitchen with her lover.

Lincoln is decent and hardworking. When he is fired from the arcade, he finds another job as a security guard. At one time he was an expert at 3-card monte. Booth wants Lincoln to teach him all he knows about the game so the two of them can team up and make a killing. Lincoln refuses to join in the scam.

The plot moves backward as we find out details about the men’s past and forward as Booth dreams of making money and marrying Grace, a woman we never see. The play moves slowly and methodically to a powerful climax that will take your breath away.

Williams and Hanchard give powerful performances as the displaced brothers who look back and forward trying to make a connection to their past and each other. Director Philip Akin handles the action splendidly in a play that is deceptively simple and powerfully moving.
___

Topdog/Underdog by Suzan-Lori Parks played until August 27, 2011 at the Studio Theatre, Niagara-on-the-Lake, Ontario. www.shawfest.com.
Posted by James Karas at 2:13 PM