SHAKESPEARE IMPROVED BY DES MCANUFF OR A TRAVESTY OF TWELFTH NIGHT? 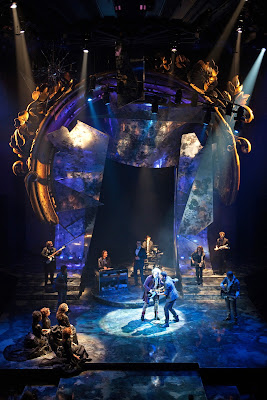 Members of the company in Twelfth Night. Photography by Cylla von Tiedemann.


The cover of the 2011 Souvenir Program of the Stratford Shakespeare Festival shows a smiling Brian Dennehy and an amazed Stephen Ouimette with golf clubs in hand and dressed in golfing attire. This is clearly an important image that we are to take home with us from this year’s offerings of a dozen plays.

As it turns out the golfers are in Shakespeare’s Twelfth Night, directed by Des McAnuff at the Festival Theatre. In case you didn’t know, McAnuff is the Artistic Director of the Festival.

There are some praiseworthy aspects to the production and they will be duly credited. But let’s start with the obvious: McAnuff is an imaginative and sometimes brilliant director who never saw a cheap laugh that he bypassed or thought of a gimmick that he did not stage. When you throw in every cheap laugh and gimmick into a production some will work but many will not. McAnuff is like a youngster who is full of ideas but has little judgment in choosing the good and discarding the mediocre. He will make a fine director when he grows up and develops that judgment.

In this production, McAnuff includes golf, tennis and baseball playing by the characters. None of these sporting interests add anything to the play and the round of golf is silly and made worse by going for cheap laughs. In Shakespeare’s play, Sir Toby (Brian Dennehy) and his companion Sir Andrew (Stephen Ouimette) arrive at the Countess Olivia’s house after a night of drinking. The servant Maria (Cara Rickets) reproaches them for the hours that they keep. In McAnuff’s play, the men are playing golf, Maria is a caddy and they have a golf cart as well. The difference between the action as suggested by Shakespeare’s text and the activity imagined by McAnuff requires leaps of the imagination and suspension of any rational thinking that are unnecessary and not particularly entertaining.

McAnuff has made a name for himself as a director of musicals and he takes Shakespeare to task for not writing a suitable musical for him to direct. True, there are several beautiful songs in Twelfth Night but that will not do for Des. He reverses the order of the first two scenes (we start with Viola and the Captain on the shore instead of at Orsino’s court with “If music be the food of love) and before Viola has finished speaking a band appears and they start playing annoying music. The band will be kept busy throughout the production with increasingly inappropriate appearances. No sooner have you settled into the poetry and humour of the play, than the musicians appear to make sure you are not enjoying the performance.

It gets so bad, that even the Captain in his short appearance with Sebastian, goes out singing “If music be the food of love.” Again, Shakespeare should be castigated for not writing something suitable for Mr. McAnuff to direct.

Among the gimmicks and cheap laughs, there are some genuinely funny moments and some excellent performances that, to put it uncharitably, defeat McAnuff’s attempts to wreck the play, but (more truthfully) show that he can be a talented director.

Tom Rooney is an outstanding Malvolio. Rooney’s Malvolio is efficient and officious and gets very few laughs. He does not deserve the treatment that he gets from Sir Toby and the rest. In a nice directorial touch, when the lights dim at the end of the play, the spotlight is on Rooney as Malvolio.

Andrea Runge is a beautiful Viola/Cesario. She is tall, attractive and speaks with passion if not poetry. Her identical twin brother Sebastian (Trent Pardy) is quite convincing as her mirror image, a feat not easy to achieve.

On the low comedy side, Stephen Ouimette carries the day quite easily as the foolish Sir Andrew. Ouimette shows a natural, comic affinity for the role as he prances around and gets very emotional to hilarious effect. A Sir Andrew to remember.

Brian Dennehy is clearly supposed to be one of the stars of the show (and the Festival) as the forever drunk Sir Toby but his performance is a big disappointment. He is unable to generate many laughs or convince us that he is such a funny bon vivant and he is easily upstaged by Ouimette.

Mike Shara made a decent Orsino if you ignore the fact that he uses his hands too much in the beginning and that he does not have an ounce of poetry in him in a role that has nothing but. Sara Topham’s Olivia was alright but did not thrill me. She simply did not show enough passion and anger for me. Ben Carlson can be an excellent Feste but McAnuff kept unleashing his musicians on him and his performance was largely ruined.

More restraint and respect for the text, fewer gimmicks and cheap laughs would have given us a fabulous production of this great comedy. As it was, it seemed to grate on my nerves as much as to please me.
______

Twelfth Night by William Shakespeare opened on July 15 and will run until October 28, 2011 at the Festival Theatre, Stratford, Ontario. www.stratfordfestival.ca
Posted by James Karas at 6:39 PM