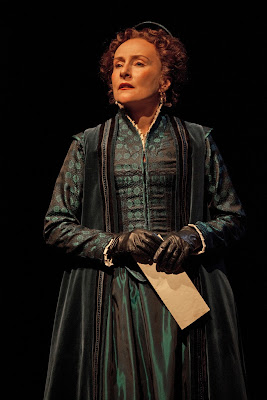 Seana McKenna as Anne Hathaway in Shakespeare's Will. Photography by Cylla von Tiedemann.


About a month before he died, William Shakespeare signed his will. In the penultimate paragraph he wrote what was to become one of the most famous and most controversial bequests in history: “I give unto my wife my second best bed with the furniture.”

Scholars have debated the meaning of the bequest but no one has dared tell us what Mrs. Shakespeare thought of it and for good reason: we have no idea what her reaction was. Playwright Vern Thiessen has provided an imaginary answer in Shakespeare’s Will, his one-woman play now showing at the Studio Theatre in Stratford.

The play premiered in 2005 at the Citadel Theatre in Edmonton and it was staged at Stratford with Seana McKenna in 2007. That production is reprised this year.

It is the day of Shakespeare’s funeral and his wife returns from the church with his will. She has not read it yet but she begins to tell us her story.

Anne Hathaway as imagined by Thiessen met Shakespeare at a fair and they ended up in her father’s barn. She was eight years his senior and clearly the aggressor. Poor William had nothing to recommend him in the eyes of Anne’s father: he was the son of a glover and the worst mayor Stratford ever had, a Catholic and a tutor. What was Anne thinking of? We do not know, of course, but we do know that she was pregnant!

Thiessen presents Anne as a sexually active woman who had relations with townspeople and tradesmen during Shakespeare’s lengthy absences in London. Shakespeare himself was bisexual and he had a long lasting relationship with a man in London, according to Thiessen.

Anne describes her domestic life, from hating Shakespeare’s sister Judith, to giving birth to their children and to the devastating loss of their son Hamnet at age 11. Her husband gains fame and fortune in London but his visits to Stratford-on-Avon become less frequent and Anne is left with the job of raising the children.

The reason for the paltry bequest in the will is punishment for the death of their son. Thiessen imagines that Hamnet drowned on a visit to the sea and Shakespeare blamed Anne for the accident and never forgave her.

This is historical fiction of a delightful nature. We know very little of Anne’s life with Shakespeare and Thiessen’s ingenious recreation of it stirs the imagination. The play is written in free verse that allows for elevated expression but is easy to on the ear especially as delivered by Seana McKenna, a master of the craft.

She has a distinctive voice and her looks convince us that Anne Hathaway probably looked just like Seana McKenna! She walks around the stage, sings a little and tells the story of her life from sexual escapades, to descriptions of the plague and the devastation that it caused, to happy domestic scenes when Shakespeare wrote plays for his children and had them in stitches with laughter.

The play lasts about an hour and ten minutes and is done without an intermission. Thiessen could have imagined twice as many incidents and McKenna could have kept us enraptured for twice as long. A delightful evening at the theatre.

Shakespeare’s Will by Vern Thiessen opened on July 13 and ran September 2, 2011 at the Studio Theatre, Stratford, Ontario. www.stratfordfestival.ca
Posted by James Karas at 1:17 PM