THE LITTLE YEARS – SHALLOW PLAY HAS LITTLE TO OFFER AT STRATFORD 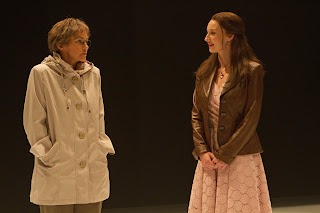 John Mighton’s The Little Years was first seen at Toronto’s Theatre Passe Muraille in 1995. The Stratford Shakespeare Festival commissioned Mighton to re-write the play and the new version is now running at the Studio Theatre.

I have no idea what unfulfilled virtues the original play had that convinced the Festival to commission a new version and thus achieve, presumably, an improved product. The result is a shallow and boring play that has very little to recommend it.

The play has some lofty social and political ambitions. Mighton accuses our education system of killing people’s ambitions and especially the aspirations of women. Schools exist to convince people that they cannot do things, according to Mighton.

The indictment is based on the story of Kate who was raised in the Happy Days of the 1950’s when women were considered incapable of doing sciences and mathematics and were advised to become stenographers.

We meet Kate at 14 (Bethany Jillard) as a precocious, brilliant high school student who is socially ill-adjusted and looking what we would call today like a geek. Her interest in science, especially the concept of time, shows the mind of a genius who has the social graces of a dork.

The stupid school principal (Victor Ertmanis) steers Kate towards a vocational school which she does not finish. She ends up as a secretary and eventually in a mental institution. She has written some brilliant material but she decides to simply throw everything in the basement.

If Mighton wants to suggest that Kate’s problem is caused by society, or her family, or the education system, he is completely unconvincing. In all likelihood she has a mental illness and it is hard to fathom that she ends in a psychiatric facility because her ambitions were thwarted. She is given electrical shock therapy perhaps for sound medical reasons and maybe not but the issue is not explored by Mighton.

Kate has a brother who seems to be everything that she is not. He is a successful writer who is admired by everyone. People are climbing over the fence of his house to pay their respects to him after he dies and his ashes are buried in his backyard.

We never see the brother but we do see his wife Grace (Yanna McIntosh), a saintly woman who takes great pains to look after Kate. We see the older Kate (Irene Poole) in the psychiatric ward, and as an older woman holding down a secretarial job for the sake of the benefits. The brilliant youngster has become a shriveled old woman who has not acquired basic social skills. Kate never becomes a fully developed human being and her tears at the end of the play are not convincing.

An artist named Roger (Evan Buliung) is the other major character in the play. His paintings are supposed to be deep and full of meaning at some point but tastes apparently change and he becomes the Barry Manilow of art. He has an affair with Grace –how and when the affair started is left in the air.

Grace has a daughter named Tanya (Bethany Jillard, again) who is a re-incarnation of her aunt Kate minus that lack of social poise. She owes a great deal to Kate, she tells us, and the shriveled up Kate shows some emotion in the last few minutes of the play. By that time we have stopped caring about her and the whole sad family. Chris Abraham directs this boring and little play.

Mighton is a brilliant mathematician and talented playwright. His Half-Life is an intelligent, witty, intriguing and moving play. The Little Years is not his best work.

The Little Years by John Mighton opened on July 13 and will run September 24, 2011 at the Studio Theatre, Stratford, Ontario. www.stratfordfestival.ca
Posted by James Karas at 2:37 PM