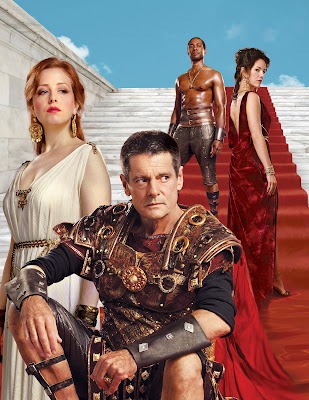 In Sarah Kane’s play Blasted, a soldier’s girlfriend is brutalized and killed by other soldiers. The solider takes revenge by raping one of the rapists, gauging his eyeballs out and eating them.

Violence on the stage is as old as drama and gauging eyes has a history going back to Oedipus and King Lear. The vilest form of vengeance is probably the murdering of children, cooking them and serving them to their father but the field of human depravity has many other examples.

Shakespeare’s Titus Andronicus has a place of honour among plays that show human viciousness. Near the end of the play, the villainous Aaron, in order to save his neck promises to speak of “murders, rapes, and massacres, acts of black magic, abominable deeds, complots of mischief, treasons, villainies.”

That is an accurate laundry list of events in Titus Andronicus, an early tragedy of revenge but it does nothing to give you the flavor of what you will see at the Tom Patterson Theatre.

Titus Andronicus is not a very good play and it is generally ignored but because it was written by Shakespeare there are occasional productions. Director Darko Tresnjak gives us a straight-faced and decent production with some questionable bits.

Titus Andronicus is a good general and a virtuous man in a corrupt Roman Empire but he is not politically astute. He is victorious against the Goths and brings Tamora, their queen, and her sons as trophies to Rome. He sacrifices one of her sons in revenge for the death of his two sons. In an act of generosity he gives the crown to Saturninus, the eldest son of the late emperor.

The plot moves quickly with Saturninus falling in love with Tamora and dumping Lavinia. She in turn marries Bassianus (Skye Branton), the emperor’s younger brother.

The escalating rounds of revenge begin with the queen’s sons raping Lavinia and mutilating her. The ultimate act of utter vengeance comes straight from Greek mythology when Queen Tamora and the Emperor are served pastries at Titus’s house and Tamora’s sons are nowhere to be seen.

John Vickery plays the title role as a square-jawed soldier, who is powerful if sometimes stentorian.

From the large number of roles in the play, there are some distinguished performances such as David Ferry as Marcus Andronicus, Claire Lautier as Queen Tamora and Sean Arbuckle as Saturninus. Dion Johnstone gets the juicy role of the evil Aaron, Tamora’s lover and an all-around bastard.

Amanda Lisman gives an extraordinary performance as Lavinia, Titus’s daughter who is raped and has her tongue and hands cut off to prevent her from identifying her violators. We first see Lavinia as an attractive and self-assured woman; then we see her bloodied, trembling and shaking like a leaf in a heart-wrenching performance.

The minimal requirement of serving a revenge tragedy to a modern audience is the prevention of giggling or outright laughter. Taking us through the text with straight face and good acting seem to work until Tresnjak started pulling some inexplicable tricks that are intended, I assume, to provoke laughter. When Titus stretches out his hand for it to be cut off as an indication of his loyalty, he changes his mind and offers the other hand. The pastry with the human flesh is offered to members of the audience. Are we supposed to split our sides laughing with revulsion?

We could do without tricks like that. A straight-forward reading of the play may be all we can expect until a director is found who can bring out the violence and the revulsion that we are supposed to feel without making us giggle.
___________

Titus Andronicus by William Shakespeare opened on July 14 and will run September 24, 2011 at the Tom Patterson Theatre, Stratford, Ontario. www.stratfordfestival.ca
Posted by James Karas at 8:49 PM