ON THE ROCKS - VERBOSITY RELIEVED BY HUMOUR AT SHAW FESTIVAL 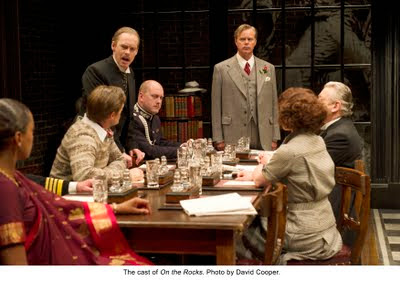 There are some critics who consider Bernard Shaw as an essayist and political pamphleteer who strayed onto the stage to expound his views in plays, a medium for which he had limited ability. There is some truth in that but in his best plays he shows immense dramatic talent that few would denigrate.

When his dramatic genius failed him, as it did sometimes, especially in his dotage, Shaw was capable of writing plays of verbosity and tedium that would challenge the patience of his most ardent admirers.

Shaw called his 1933 play On The Rocks “a political comedy” and although there are lots of politics, there is precious little comedy in the piece. The Shaw Festival produced it for the first and only time in 1986, most assuredly honoris causa. A Festival dedicated to the works of Shaw would find its honoris indefensible if it did not produce the entire Shavian canon but what do you do with a talkathon that may play to an empty theatre?

Artistic Director Jackie Maxwell found the solution: have someone adapt the piece and make it a bit more palatable. The job was assigned to playwright Michael Healy and his adaptation is up and running at the Court House Theatre.

Healy has made a number of changes including the order of the action; added a good number of witty lines and made the play more tolerable. Director Joseph Ziegler has added some overacting by a couple of youngsters, some overenthusiastic exits and entrances and gave us a taste of the play without boring us to death.

The play is set in a cabinet room in the residence of the British Prime Minister. It takes place during the depression and there is high unemployment, great unrest and people have taken to the streets demanding that something be done. The Prime Minister, Sir Arthur Chavender (Peter Krantz) has just made a revolutionary speech and the Chief of Police (Thom Marriott) and the Leader of the Opposition, Sir Dexter (Steven Sutcliffe) arrive to express their shock at its content.

They will be followed by an array of titled personages, from Admiral Sir Bemrose Hotspot (Norman Browning) to Dame Adhira Pandranath (the marvelous Cherissa Richards) to the properly named Earl of Barking (Martin Happer). The Duke of Domesday (David Schurmann) will totter in as will the Mayor of the Isle of Cats (Anthony Bekenn) with Miss Aloysia Brollikins (Marla McLean). Their colourful names do not betoken colourful characters as they will simply add to the talkfest. Claire Jullien plays The Lady who will inspire the Prime Minister.

The political discussion is broken up by the Prime Minister’s wife (Catherine McGregor) and their two obnoxious children (played by Ben Sanders and Maggie Blake). Ziegler has them rushing on and off the stage and overacting for the sake of getting a few laughs.

The three-piece suits and Christina Poddubiuk’s design within the extreme limitations of the Court House Theatre suggest the stuffy atmosphere of the British ruling class. The general inability to produce an impeccable Oxford accent by the actors, detracts from the atmosphere but you learn to live with it. Aside from that, the actors do their job well; Krantz is likable, Sutcliffe, detestable; Marriott, an upstanding policeman; Richards, terrific; Browning looks the part but can’t do an English accent if his life depended on it.

If my counting is correct, Shaw wrote 53 plays and six playlets. The Shaw Festival is in its 50th year and I have not seen anything indicating that they have produced everything that he wrote for the stage. The Stratford Shakespeare Festival staged the bard’s entire canon but he left about 30% fewer plays than Shaw. Will we see everything?

In any event, you can see On the Rocks and cross it off your list even if you had to cheat a bit by seeing an adaptation!


On the Rocks by Bernard Shaw continues until October 8, 2011 at the Court House Theatre, Niagara-on-the-Lake, Ontario. www.shawfest.com.
Posted by James Karas at 10:39 AM