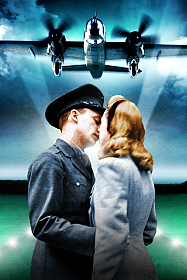 When Terence Rattigan’s Flare Path opened in London in 1942 the playwright went to the theatre in the uniform of a Royal Air Force Flying Officer. World War II was raging and the play concerned an RAF squadron about which Rattigan had some knowledge.

The play was a hit and it has been revived for the centenary of Rattigan’s birth at the beautiful Theatre Royal Haymarket in London in a splendid production directed by Trevor Nunn.

The play is set in the lobby of a hotel near an RAF base. Peter Kyle (James Purefoy) arrives and we meet some of the locals including the crotchety Mrs. Oakes (Sarah Crowden), the over-enthusiastic waiter Percy (Matthew Tennyson) and Countess Skriczevinsky (Sheridan Smith) who is a former barwoman but is now married a Polish Count. They will provide the humour of the play.

Like one of those large aircraft, the play takes a while to take off but it flies smoothly and effectively once it is off the ground. There is a love story and a war story and the two are intertwined to deliver the appropriate message.

Kyle, a matinee idol, is in love with Patricia Warren (Sienna Miller, the star of the show) with whom he acted at one time. She is married to Flight Lieutenant Graham (Harry Hadden-Paton). Patricia loves Kyle and she is ready to tell her husband that she will leave him for the movie star.

In the meantime, the officers leave on a dangerous mission against the Nazis. We are treated to a dramatic overhead video of planes taking off. One of them does not make it and the success of the mission is doubtful.

Lt. Graham dotes on his wife. When he returns from his mission, he breaks down and expresses his fear, indeed panic at flying. It is an emotionally charged scene in which Patricia provides comfort and moral support. She realizes the depth of her husband’s feeling for her and his need of her.

A few words about Flying Officer Count Scriczevinsky (Mark Dexter). There is no suggestion that he is not a Polish nobleman but he is nevertheless called, rather contemptuously I think, Johnny. He speaks little English and that is used as a source of humour. When his plane lands in the water, he reports that he landed in the “drink”. Dexter speaks with terrible accent and one assumes it is supposed to be Polish. The portrayal of Johnny is clearly racist and the production is hardly to blame for that but the matter should not pass unmentioned.

It should be noted that Johnny’s love of his “countess” is genuine even though she is a foolish woman.

Getting the officers, their wives and the other characters in a hotel lobby was a necessary device for Rattigan in order to construct a plot. Reasonable people may ask why the officers, including Squadron Leader Swanson (Clive Wood) are spending time in a hotel instead of at their base but that’s letting reality intervene with the theatre.

The performances were of high calibre and the entertainment and historical interest of the play are excellent. Sienna Miller and Hadden-Paton get the big dramatic scene while Miller and Purefoy get the romantic scenes all to good effect.

When all is said and done, we have to deal with the main issue: what will Patricia do? Will she opt for her passionate love for Kyle or will she do her duty and stay with her husband? Heroic romance may have a place in peacetime but during war we stand by our fighting men. Patricia chooses to do her duty as should all, repeat ALL, women in time of war.

In the final scene, all are gathered in the hotel lobby and sing about joining the RAF, war and peace. Rah, rah.
_____
Flare Path by Terence Rattigan continues until June 4, 2011 at the Theatre Royal Haymarket, London, England. www.trh.co.uk
Posted by James Karas at 12:30 PM