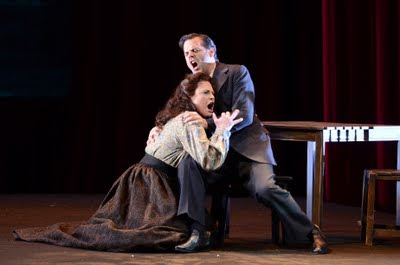 Opera Hamilton bid farewell to the Grand Hall at Hamilton Place with two performances of Cavalleria Rusticana and I Pagliacci. Pietro Mascagni’s and Ruggero Leoncavallo’s one-act gems were produced two years apart in 1890 and 1892 and have kept each other company with marvelous fidelity ever since.

Both operas have amazing plot and musical similarities and share an emotional wavelength of strong passion, treachery and jealousy leading to murder.

Opera Hamilton has tackled both works and produced good results subject to the limitations placed on it by the cavernous Grand Hall and, as always, its budget.

American lyric tenor Richard Troxell as Turiddu started the evening with “O Lola, ch’ai di latti,” the aria praising his love’s blouse and body parts. He is off stage and sounded a bit rough but he settled into his role and soared when necessary as in his final aria, “Quel vino e generoso” just before he is killed.

The woman Turiddu is praising was his former love and is now the wife of Alfio. Santuzza is his current, pregnant girl and he should be paying attention to her. She has seen him lurking around Lola’s house and is not too happy about the situation. Canadian soprano Joni Henson was not at her best in the role. She had her moments of sound singing but there were also times when she did not rise above the orchestra sufficiently. As one would expect from a woman who is dumped and snitches to Lola’s husband, she was not as sexually attractive as Lola.

Alfio is an upstanding citizen who loves his job and his wife. Baritone Gregory Dahl sang the role commandingly as he did the part of Tonio in Pagliacci. High marks for a fine evening’s work.

Cavalleria has some marvelous choral music especially The Easter Hymn and the Hamilton Opera Chorus did a fine job.

Scenery and Lighting Designers Graham Cozzubbo and Raha Javanfar found an intelligent way of providing a “set” without breaking the bank. The opera calls for a village square in Sicily with a church on one side and a tavern (the house of Mamma Lucia) on the other. In this production they opted for a large screen on which the square, a church and other scenes are projected. The problem is that the screen is not large enough. It should cover most of the back of the stage. As it is, you get the feeling that the characters of the opera are watching scenes from Sicily rather than being a part of them. The wings of the stage are bright red indicating blood and passion. The solution works only partially well and one wonders if it cannot be improved sufficiently to give one a silk purse out of a sow’s ear.

The same set is used for Pagliacci with similar results. In the second scene of the opera there is an indication of a curtain where the players put on their show.

Pagliacci is probably the better of the two pieces and it has the plot of the travelling players where Canio’s wife Nedda is cheating on him with Silvio. Tonio the hunchback is also in love with Nedda and he tells Canio of his wife’s infidelity.

The plot of the “real world” is similar to the plot of the play being put on by the troupe and in the end reality merges with the fiction of the play, Canio discovers his wife’s adultery and the identity of her lover and, as you may have guessed, both Nedda and her lover are sent to the big theatre in the sky.

Sally Dibblee did credible work as Nedda and Jeffrey Springer’s Canio was dramatic and affecting. James McLennan was Beppe and Andrew Love was Silvio, both providing respectable performances.

Opera Hamilton is moving from the cold and forbidding Hamilton Place to what looks like the more intimate setting of the Dofasco Centre for the Arts. It promises a larger orchestra pit and there will be more performances. We will do a reality check in the fall.
____

Cavalleria Rusticana by Pietro Mascagni and I Pagliacci by Ruggero Leoncavallo were performed on April 21 and 23, 2011 at Hamilton Place, Hamilton Ontario.
Posted by James Karas at 10:46 AM