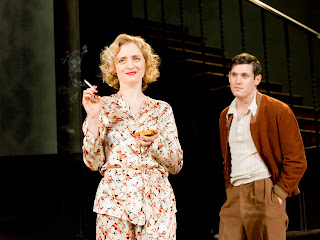 This year is the centenary of the birth of playwright Terence Rattigan (1911-1977) and it seemed like a good excuse to produce a number of his plays on the British stage. The venerable Old Vic has joined the fray with a production of Rattigan’s last play, Cause Célèbre. The play is about a sensational murder in 1935 but Rattigan wrote it in the last year of his life.

The central figures of the play are two women who represent two different views of morality and whose lives cross as a result of a murder. Edith Davenport (Niamh Cusack) is a sharp-nosed, dried up, upper-class woman who started getting “headaches” at the thought of sex with her husband when she was around forty. She has a 17-year old son Tony (Freddie Fox) on whom she dotes but who is growing up and wants little to do with his mother’s view of life.

Her husband John (Simon Chandler) sought sexual pleasure elsewhere, was found out and the inevitable result was a divorce and dispute over custody of Tony.

In contrast to Mrs. Davenport, Alma Rattenbury has a fully active sexual appetite and an older husband who cannot climb the stairs to their bedroom. She hires George (Tommy McDonnell), a 17-year old youth for housework and expands his duties to having sex with her. She loves her children as much as Mrs. Davenport.

In due course, Mr. Rattenbury’s (Timothy Carlton) head is crushed with a mallet and Alma and George are charged with his murder. The self-righteous Mrs. Davenport is selected for jury duty and in fact she is chosen jury forewoman for the trial.

Eminent lawyers represent the two accused and the Crown and a trial follows to determine the guilt or innocence of Alma Rattenbury and George.

The problems with the play are not hard to spot. It was initially written as a radio play where frequent scene changes are easy to achieve. That is a bit harder on stage. We have thus a mostly empty stage and we jump from the Davenport to the Rattenbury houses, to the lawyer’s office, to the jail to the court.

A courtroom scene is tough to stage because you have a judge and lawyers facing each other with the accused and the jury somewhere on the side. The solution here was to have the judge on his high bench and the lawyers standing on each side of him facing the audience. The accused did the same and the jury was not shown on stage at all.

The cards are stacked pretty heavily against Mrs. Rattenbury. There is nothing good to be said for her, in fact. A licentious hussy who seduced a 17-year old is a moral reprobate who deserves to hang. When that happens, you know that a good lawyer will figure something out and provide some fine drama for the last third of the play. And so it happens.

Anne-Marie Duff as Alma Rattenbury is slender, sensual, a bit tarty and a pleasure to watch. Cusack as her counterpart is appropriately prissy, judgmental and puritanical. A very fine performance. The supporting actors do their job and the rest of the play is carried by the lawyers, especially Nicholas Jones as lead defence counsel and Richard Clifford as Croom-Johnson, the prosecutor and Patrick Godfrey as the judge. The fact that this type of trio seems to appear is similar format in most other British courtroom scenes does not detract from the fun of watching them.

We can raise our eyebrows at English society in the 1930’s but we should really spare ourselves the trouble. This is a light afternoon at the theatre and a look at the work of a fine craftsman of the theatre who just happened to be born one hundred years ago.
____
Cause Célèbre by Terence Rattigan continues until June 11, 2011 at the Old Vic Theatre, The Cut, London SE1 8NB. www.oldvictheatre.com/