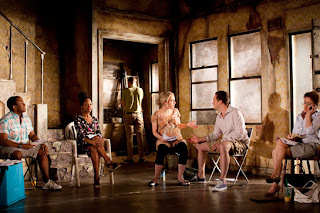 Clybourne Park by Bruce Norris provides an unforgettable night at the theatre. It is the type of play and production that calls for nothing but superlatives and stock phrases like “not to be missed” or “a must-see”. All true but insufficient to describe this brilliant play. It is now playing at Wyndham’s Theatre in London’s West End.

Clybourne Park is a screamingly funny play that is by no means a comedy but may qualify as satire. It is serious, intelligent drama that manages to evoke laughter, shock and a great deal of thought.

Toronto audiences may recall a production of Lorraine Hansberry’s A Raisin in the Sun that was staged by Soulpepper several years ago. The play is about an African-American family that wants to buy a house in Clybourne Park, an all-white neighbourhood in Chicago in the 1950’s. In those days they were referred to as Negroes, black or coloured people but that is another story.

Karl Lindner, a representative of the Clybourne Park Improvement Association visits the Afro-America family and offers to pay them off if only they would not move into the neighbourhood. The Association believes that the presence of Negro families lowers real estate prices.

Bruce Norris, a white Texan playwright, borrows Mr. Lindner from Hansberry’s play and we find ourselves in Clybourne Park in 1959 where a white couple, Russ and Bev, have just sold their house to a Negro family. As they are getting ready to move, Russ and Bev are visited by Jim, the local minister and by Karl and his congenitally deaf wife Betsy. Francine is Russ and Bev’s black maid and her husband Albert drops by too.

Russ and Bev are moving because their son, a war veteran, committed suicide in their house. This has evoked a despicable reaction and they have seen the ugly side of their neighbourhood first hand. They are moving to escape both the memory of their son’s death and perhaps much more the moral ugliness of their neighbours.

Some of the people of Clybourne Park are unsophisticated, middle Americans who are infected with prejudices and bigotry that make them simply hideous people. Norris also makes them outrageously funny.

The second act of the play takes place in 2009, fifty years later and we see the same actors playing different characters who meet in the same house. The place is in a rundown condition and the characters are distant descendants of the people we met in 1959. The neighbours are meeting to discuss the construction of a new large house where the old one stands. These people are far more sophisticated than the 1959 group. They are well-travelled, professionals and concerned about saving the neighbourhood in the face of an attempt to build large houses. The neighbourhood did go down after Afro-Americans moved in, prices did tumble but now the white families have returned and they want to change things.

Director Dominic Cooke orchestrates brilliant performances from these actors. The characters are loud, talk over each other, scream, even start a fight but they are hilarious and deadly serious. Amazing performances.

This production of Clybourne Park by Bruce Norris was first performed at the Royal Court Theatre on August 26, 2010 and transferred to Wyndham’s Theatre, London, on January 28, 2011 where it continues. www.clybournepark.co.uk
Posted by James Karas at 3:52 PM