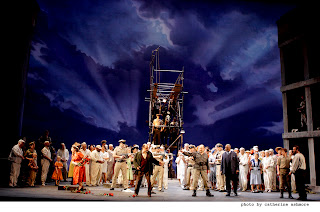 Fidelio, Beethoven’s only opera, is based on a libretto entitled Leonore ou l’amour conjugal by Jean-Nicolas Bouilly. That’s clear enough: we will get a story about a woman called Leonore and the moral will be the value of married love. My guess is that many people like me associate Fidelio more with false imprisonment, political oppression and the triumph of the human spirit in the face of tyranny.

Fidelio is now playing at the Royal Opera House, Covent Garden in a revival of production by Jurgen Flimm that first opened at the Metropolitan Opera House back in 2000. It is a full-blooded production, done in modern dress, with some superlative singing.

As the curtain rises, we see a three-level cellblock on the right with the prisoners visible. What goes on in the front of the cells? Prison Guard Jaquino (Steven Ebel) is making a proposal of marriage to Marzelline (Elizabeth Watts), the daughter of the Warden Rocco (Kurt Rydl). She rejects him because she is in love with a new guard called Fidelio (Nina Stemme).

The first chance she gets, Marzelline breaks out into the wonderful aria, “O war’ich schon mit dir vereint” (“Oh when shall I be bound to him”) and she means marriage to Fidelio. Rocco, a character straight out of comic opera, gives his blessing to the proposed marriage and some fatherly advice about the need for money to accompany love: “Hat man nicht auch Geld bei Leben” (“Love will not suffice for marriage”.

The music is lilting, the subject matter conjugal and the prisoners on our right are all but forgotten. Again, this is comic opera and highly enjoyable if a touch incongruous.

We finally learn that Fidelio is really Leonore and she is here to save her husband Florestan who has been unjustly imprisoned for his political views and is about to be permanently dispatched. Conjugal love takes the back seat as we visit Florestan (Endrik Wottrich) in the dungeon and he intones the powerful aria “Gott, welch’ Dunkel hier” (“God! This awful dark”).

Florestan’s enemy is the Military Governor of the Prison, Don Pizarro, (John Wegner), a stock evil character who wants to eliminate our noble hero. In the end Florestan is saved by Don Fernando (Willard W. White), a minister and conjugal love triumphs.

Our hero is saved by the mercy of God and the intercession of the Minister. There is no regime change or any criticism of the regime. We do not know Florestan’s political views that elicited such murderous hatred from Don Pizarro. The King is good, everybody is quite decent except for one bad apple, it seems. The human spirit is victorious, conjugal love triumphs and we have heard some exceptional music and singing in an awkwardly constructed opera.

Nina Stemme has a big and resonant voice and she delivered the role of Fidelio convincingly. Florestan appears only in Act II but German tenor Wottrich does have a tough aria to contend with and he does his job with thoroughness.

Rydl’s Rocco is bouncy at the beginning but he turns serious and humane in the second act in a fine performance. Bass-baritone John Wegner is just what you want from the nasty Pizarro, a vengeful creep you gets his comeuppance. Elizabeth Watts is a perky and wonderful Marzelline.

The Royal Opera Chorus as prisoners delivers the glorious and joyful coda praising Leonore for saving her husband and not the establishment of justice or the righting of a wrong. Beethoven wrote these great choral pieces that are worth the price of admission alone.

Mark Elder conducted the Orchestra of the Royal Opera House in a powerful delivery of the music in this thoroughly enjoyable production.

Fidelio by Ludwig van Beethoven opened on March 29 and will be performed six times on various dates until April 16, 2011 at the Royal Opera House, Covent Garden, London. www.roh.org.uk
Posted by James Karas at 9:27 AM