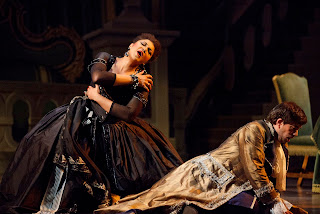 Opera Atelier is winding up its 25th year with a marvelous staging of Mozart’s last (maybe) opera, La Clemenza di Tito. The production is successful on every ground and provides a splendid night at the opera.

La Clemenza has its devoted fans and its dedicated detractors, the latter I think outnumbering the former by a substantial number. It was Mozart’s last or maybe his second to last opera. He was working on The Magic Flute in the summer of 1791 when he was asked to write an opera to celebrate the coronation of Emperor Leopold II as King of Bohemia. Being broke and not in the best of health, Mozart accepted the commission.

Opera had moved forward several leaps by then what with Don Giovanni, The Marriage of Figaro and Cosi fan Tutte already on the boards. But Mozart reverted to the stiff formality of opera seria for La Clemenza and hurriedly put together something for the great ceremony.

The coronation and the premiere of the opera took place in Prague on September 6, 1791. (The Magic Flute opened on September 30, hence the disagreement about which came last.) Now when you compose an opera to celebrate a coronation, you better say some pretty nice things about kings. Happily, there was a libretto waiting to be set to music which said just that.

In fact the story of Roman Emperor Titus (79-81 A.D.) had been used to generate forty operas already. Pietro Metastasio had seen to that and all that was needed was some revisions by Caterino Mazzola.

Opera Atelier’s Co-artistic Director Marshall Pynkoski has not taken any half measures in the current production. He has gathered a first-rate cast of singers that deliver such wonderful vocal splendor that you forget if the opera has any short-comings. The Tafelmusik Orchestra conducted by David Fallis handles the score with precision and adroitness. The “first” of the headline refers to the first time the opera is produced on period instruments in North America!

The outstanding cast is headed by Croatian Tenor Kresimir Spicer who takes the role of the magnanimous Emperor who forgives everyone including those who tried to kill him or betrayed him. Spicer does a splendid job handling his arias with ease.

The more famous star is Canadian soprano Measha Brueggergosman who dominates the production vocally and physically. She displays physical agility and motion as the nasty Vitellia, the ambitious daughter of the previous Emperor who plots Tito’s assassination. Her vocal delivery is lyrical, expressive, dramatic, marvelous.

Male soprano Michael Maniaci is at the top of a small number of men who have voices in that range. He is terrific as Sesto, a friend of Tito, a lover of Vitellia and a would-be assassin.

The other woman in the opera is Servilia, Sesto’s sister sung beautifully by soprano Mireille Asselin. Mezzo-soprano Mireille Lebel takes on the pants-role of Annio, Sesto’s friend and Servilia’s lover.

As we have come to expect, co-artistic director Jeannette Lajeunesse Zingg choreographs some beautiful ballet sequences for the Atelier Ballet.

Gerard Gauci designed a colourful set representing scenes in Rome, and the costumes. It is all 18th century so don’t look for togas and white columns. The costumes and the backdrops represent how the 18th century imagined Rome and they provide a very effective milieu for the opera.

Combine all of that with the gorgeous Elgin theatre and you will do what the opening night audience did – give them a standing ovation.
____
La Clemenza di Tito by Wolfgang Amadeus Mozart opened on April 22 and will run until May 1, 2011 at the Elgin Theatre, 189 Yonge Street, Toronto, Ontario.
Posted by James Karas at 12:35 PM