ROCKET TO THE MOON – REMARKABLE ODETS PLAY AT THE NATIONAL THEATRE 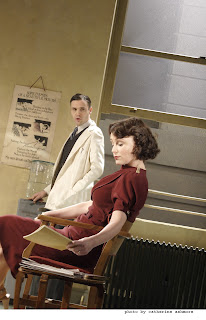 Productions of the plays of Clifford Odets are a rarity and as far as I can tell there has not been any production in the Toronto area for some time except for Soulpepper’s Awake and Sing in 2009. England’s National Theatre with its broad spectrum of productions has revived his 1938 play Rocket to the Moon on the Lyttleton stage.

Rocket to the Moon is a remarkable play, an interesting period piece that is more fascinating than enjoyable. It takes place in a dentists’ office in 1938. The main characters are two dentists who share office space, a foot doctor next door and a secretary who has just been hired by one of the dentists.

Ben Stark (Joseph Millson) is married to Belle (Keeley Hawes) an officious and ambitious woman who wants her husband to do better. Her father, Mr.Prince (Nicholas Woodeson) is a wealthy widower, a bit of a wag, a restless spirit and a man who has not spoken with his daughter for years. Dr. Cooper (Peter Sullivan) is a dentist who rents space from Ben but cannot pay his bills. He has resorted to drinking.

The catalyst of the play is Cleo Singer (Jessica Raine) the secretary that Ben just hired. She is attractive, sassy, an airhead and a braggart. She wants you to believe that she comes from a wealthy family, that she does not have to work and she has ambitions of becoming a dancer.
Ben, Mr. Prince and a patient named Willy Wax (Tim Steed) all fall in love or in lust with her. All of them are in search of a rocket to the moon, something to get them out of their humdrum existence. The unhappily married Ben, the ambitious Belle, the unhappy aging man, Willy and Cleo are all looking for something that is either not there or they are unable to grasp.

It is a slow-moving and verbose play. The choice of dentists as the people who need a rocket to the moon so desperately is an interesting one. Not too many people today would associate them with people who cannot pay their rent and resort to alcohol for comfort. These are not Eugene O’Neill’s pipe-dreamers in The Iceman Cometh of around the same time. Mr. Prince has no financial troubles but he wants to marry the young girls who is not quite twenty years old while he must be over sixty.

Jessica Raine does fine work as the apparently dim-witted secretary who is nevertheless able to play the three men on her fingertips. Woodeson is colourful and suave as the old man with the fancy canes and the florid language.

Millson is the henpecked husband who is looking for a way out without being found out while Keeley Hawes does excellent work as the attractive but demanding and domineering wife who is also looking for a rocket to somewhere.

Director Angus Jackson keeps this somewhat lengthy piece moving at a good pace and in the end you do get a fascinating night at the theatre and not only for being given yje opportunity to see such a rarely produced play.