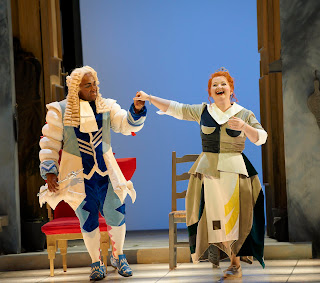 Rossini’s La Cenerentola is one of the better comic operas in the repertoire and the Canadian Opera Company is wise to bring it back after a fifteen year absence. This rendition of the Cinderella story has some gorgeous music, marvelous patter arias and ensemble pieces and some funny comic business.

Rossini composed La Cenerentola in a leisurely 25 days in January 1817 just in time for its premiere at the Teatro Valle in Rome. It was bit of a rush job for librettist Jacopo Ferretti too who had to grab some material from Charles Perrault, Charles Guillaume Etienne and Francesco Fiorini but when you have one month from the decision to write an opera based on Cinderella to the opening night, you have to take some shortcuts. The librettist was not the only one who got help from others. Rossini hired a collaborator who put together the recitatives and composed some arias which were later removed.

The COC calls the opera Cinderella (La Cenerentola) for no apparent reason. The English name may have been justified if it were sung in English. Since it is sung in Italian, why bother with the translation of the title?

This Cinderella is called Angelina and she is abused by her stepfather Don Magnifico and his hideous daughters Clorinda and Tisbe. She does go the ball but there is no evil stepmother or glass slipper. Let us dispense with any suspense and state that she does end up marrying the prince.

The Canadian Opera Company has a very good cast with two outstanding singers in the leading roles. For the role of Prince Don Ramiro the COC has struck gold in the vocal chords of Lawrence Brownlee, one of the best lyric tenors in the business. He reaches the high notes with natural agility and produces outstanding vocal pleasure.

Angelina is sung by American mezzo-soprano Elizabeth DeShong. She has a lush voice and sang gorgeously. She sang the beautiful aria “Una volta c’era un re” about love, innocence and goodness with tenderness and emotion.

Canadian soprano Ileana Montalbetti as Clorinda and Tunisian mezzo-soprano Rihab Chaieb as Tisbe were properly ridiculous and sang and acted their parts well. Bass-baritone sang the role of the philosopher Alidoro and baritone Brett Polegato was the valet Dandini. I don’t find these as particularly rewarding roles but here can be no complaints about the performances.

The problem with the production is attributable directly to director Joan Font. Although there were flashes of humour much of the production appeared to be screwed to the stage boards. Font could not figure out a way of producing physical movement for long stretches. He did introduce half a dozen mice which kept popping in and out to such an extent that I began hoping that a mousetrap or a cat would appear and get rid of them. They kept running around even when there was no apparent reason for them as in the reprise of the aria “Una volta c’era un re” by Angeline near the end.

Don Magnifico, the stepfather is a broadly comic character and should be good for a few laughs. If bass Donato DiStefano has any comic talent (and there is no reason to doubt that he does) it was well-hidden because Font seemed to refuse to let it come out. This is comic opera and certain liberties and physical acts are needed to produce laughter. What was done with DiStefano applied pretty much across the board with the other characters. There were moments of humour but not enough from such a comic opera.

The costumes were colorful, even pretty. Some of the characters and the chorus were dressed in motley costumes and the banners carried by the latter gave the story a medieval or perhaps mythical feel that was acceptable. But where was the physical movement?

The set by Set and Costume Designer Joan Guillen, from the two storey house with the plain fireplace of the financially-strapped Don Magnifico to the more opulent pad of the Prince was serviceable.

Cinderella (La Cenerentola) by Gioacchino Rossini opened on April 23 and will be performed nine times until May 25, 2011 on various dates at the Four Seasons Centre for the Performing Arts, 145 Queen Street West, Toronto, Ontario. Tel: 416-363-6671. www.coc.ca
Posted by James Karas at 4:50 PM