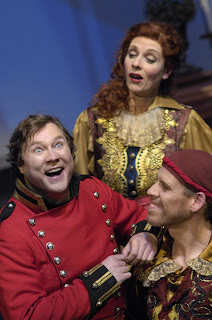 Toronto Operetta Theatre has ended its 26th year with an energetic production of that all-time favourite, The Pirates of Penzance by Gilbert and Sullivan. The TOT cast and small orchestra manage to generate an enormous amount of oomph and provide a lot of fun. One feels sometimes that TOT is trying to warm up a room with a light bulb but General Director and Founder of TOT Guillermo Silva-Marin seems to be nonplussed by the limitations of space and budget.

The Pirates, subtitled Slave of Duty, is about a nice young man name Frederic, who is bound to serve with a band of pirates until his 21st birthday. These are really nice pirates who will not harm anyone who is an orphan – and everyone that they meet seems to be an orphan.

They run into “the very model of a modern Major-General” Stanley and his nubile wards but they can do nothing because the Major-General is an orphan. What they really want is the pretty girls but there many obstacles that will take a couple of hours to unravel. This is clearly serious stuff and thank goodness for Gilbert and Sullivan who will work things out for us with humour, wonderful melodies and patter songs.

Canadian tenor Ryan Harper is Frederic, the Pirate Apprentice, who is allowed to leave the Pirates on his 21st birthday and become a law-abiding citizen with a mission to destroy his former comrades. But wait: Frederic was born in a leap year and his 21st birthday is many decades away. Harper is a moon-faced fellow who looked innocent enough. His singing was good and his handling of the role was fine.

Canadian soprano Jessica Cheung sang the role of Mabel, Frederic’s love interest. She gets to vocalize through some scales including some ribbing of operatic sopranos and she does a commendable job. She is not quite as good in her portrayal of the Major-General’s daughter. She needs to learn to enunciate better and appear less tense on the stage.

The Major-General is a familiar comic character and places a heavy burden on the singer who sings the role because he has to sing the ever-popular patter song “I am the very model of a modern Major General” and provide some broad humour as the buffoon of the operetta. Now a patter song requires a very quick tongue and some vocal precision that does not come as trippingly to David Ludwig as one would wish. He is mostly successful with the role but not entirely.

Veteran singer Jean Stilwell played Ruth, a Pirate Maid-of-all-work. She is a fiery and vibrant redhead who delivered her songs with vigor and vivacity. Frederic rejects her because she is too old and the operetta will end too quickly if he goes for her. He should go back to her as portrayed by Stilwell, after the curtain falls.

Sets were minimal but the costumes by Designer Howard Tsvi Caplan were quite colourful. The pace was brisk and the ensemble singing quite beautiful. The small theatre and the audience’s proximity to the stage made for intimate contact between stage and audience.

No doubt there were high notes which were never reached and low notes that were more looked for than attained. The attempts at an English accent produced the usual deplorable results. But the overall effect was quite delightful. Robert Cooper conducted the orchestra to produce lively results and Stage Director Guillermo Silva-Marin kept this other world known as operetta moving to the inevitable conclusion for both performers and audience - a sheer delight.
____