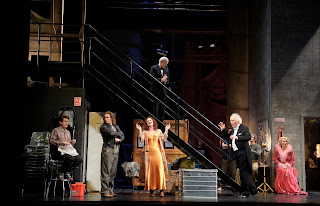 Everybody knows that Theseus abandoned Ariadne on the island of Naxos. Yes, he dumped the very woman who fell in love with him and saved his life from the dreaded Minotaur in Crete.

If Theseus can be indicted for being a callous bastard in relation to the Cretan princess, opera composers cannot be accused of the same. Starting with Monteverdi in 1608 and into the 1990’s there are over seventy operas dealing with the fate of poor Ariadne. The latest one (1995) is Alexander Goehr’s Arianna, a reworking of the libretto that Monteverdi used.

In 1912, Richard Strauss and his librettist Hugo von Hofmannsthal produced the first version of Ariadne auf Naxos which was not successful and in 1916 they put out a second version and got better results. The Canadian Opera Company has assembled some major talent and produced this work as part of its spring season.

Ariadne auf Naxos is an unsatisfactory work in many ways. It is comic, ironic, serious and perhaps even burlesque. The Prologue takes place in the house of a wealthy Austrian where we meet the singers and actors who will put on an opera and a comedy in the mansion owner’s private theatre. The opera is Ariadne Auf Naxos and the comedy is The Fickle Zerbinetta. The rich patron orders that the opera and the comedy be performed together.

The Prologue has some spoken dialogue and many recitatifs. That means it is quite verbose and you end up looking at the surtitles and finding the humour escape you or not finding it at all. No doubt, this part of the opera may be funnier to German speakers.

The opera and the comedy are performed “together”. We see the distraught Ariadne bewailing her fate and the comedians show up and try to console her. We have opera and commedia dell’arte running into each other. In the end, the god Bacchus stops by and Ariadne finds love and, we assume, happiness and so do the comedians.

Despite the title, then, Ariadne is only a third or perhaps half the opera. There are some vocal and musical peaks but there are also some low points to the extent that the whole thing works only partially well through no fault of the current production.

The highlights are Canadian soprano Adrianne Pieczonka (Prima Donna and Ariadne) and tenor Richard Margison (Tenor and Bacchus). Strauss provides the disturbed Ariadne with some marvelous arias as she expresses her wish to be dead. Outstanding performance and singing by Pieczonka.

Zerbinetta is the comic counterpart of the tragic Ariadne and Jane Archibald does good work in the role. Her showpiece recitative, aria and vocal acrobatics, however, seem to go on forever.

British mezzo-soprano Alice Coote was very adept vocally and theatrically in the pants role of The Composer.

One of the stars of the evening was undoubtedly conductor Sir Andrew Davis who led the Canadian Opera Company Orchestra.

Neil Armfield directed this staging for the Welsh National Opera and it deserves high praise for its production values. The set and costume designs by Dale Ferguson were effective from the backstage of the theatre to the deserted island where Ariadne bemoans her fate.

This production, for all its virtues, will not catapult Ariadne auf Naxos into anyone’s “favourite opera” category but it is decidedly worth seeing.
__

Ariadne auf Naxos by Richard Strauss opened on April 30 and will be performed eight times until May 29, 2011 on various dates at the Four Seasons Centre for the Performing Arts, 145 Queen Street West, Toronto, Ontario. Tel: 416-363-6671. www.coc.ca
Posted by James Karas at 10:39 PM