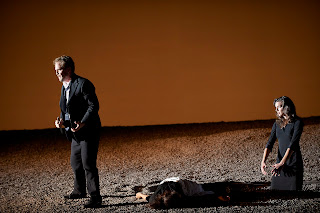 Christoph Willibald Gluck’s Orfeo ed Euridice is considered an operatic masterpiece and is famous for being the first “reform” opera. It was first staged in 1762 and for some reason the Canadian Opera Company had never produced it. It has made amends by giving us what I can only describe as a great production this year. The production is borrowed from the Lyric Opera of Chicago but let us give General Director Alexander Neef credit for knowing a good thing when he sees one.

The kudos belongs to Director Robert Carsen who has imagined and delivered an original, fully integrated and stunning interpretation of the work. The word great has been so debased by overuse as to become almost meaningless. I refer to its fundamental meaning of something exceptional, brilliant and head-and-shoulders above any other production.

Orfeo ed Euridice opens on a desolate, gray expanse of seashore with an open pit. There is a procession of people, dressed in black and carrying a shrouded body, that walk towards the pit. They are carrying the dead Euridice to her grave. A distraught Orpheus is part of the precession and his beloved wife is about to be buried. He is torn with grief and attempts to commit suicide.

Euridice is placed in the grave and her body is covered leaving a mound. A light is placed at the head of the grave. The people/chorus leave Orpheus behind to mourn his wife.

It is a visually arresting scene and a stunning imagining of the opera. There is nothing in the libretto to indicate any of this. In fact, the libretto calls for “a pleasant but secluded grove of laurel and cypress trees.”

The barren expanse will serve as the sole set for the entire production.

It gets better. When Orpheus approaches the Underworld, the stage is lined with shrouded bodies, the Furies of Hades, surrounded by a circle of torches. He goes in the middle of the Furies and begs to be allowed to reclaim his wife. The Furies relent and allow him to go to the Elysian Fields, the Rosedale of Hades you might say.

Carsen’s direction provides a visual counterpart to the music and the singing. As the Furies are calmed by Orpheus, they back away from him, become less threatening.

In the return to earth in the final scene, Orpheus and Euridice emerge from the grave where Euridice was buried. It is here that Orpheus loses his self-control and looks at Euridice. The deal was that he can have her back provided he does not look at her during the journey to earth from the Underworld.

The people who deserve full credit for bringing Carsen’s vision to the stage are Set and Costume Designer Tobias Hoheisel and Lighting Designers Carsen himself with Peter Van Praet.

I speak at length about Carsen’s vision of the opera because it is a stunning and extraordinarily effective interpretation.

He has lots of help from the singers. By far most of the opera falls on Orfeo and the COC has one of the best in the world in American countertenor Lawrence Zazzo. Zazzo as Orfeo must express in turn grief, despair, defiance, fear, supplication, love and elation. He has the suppleness and tonal quality of voice to express all of these stages in the life of Orpheus. It is a marvelous performance.

Soprano Isabel Bayrakdarian has the relatively short role of Euridice as does soprano Ambur Braid as Amor. Both roles are sung well.

Harry Bicket conducts the COC Orchestra for this outstanding night at the opera.
____

Orfeo ed Euridice by C. W. Gluck opened on May 8 and will be performed eight times on various dates until May 28, 2011 at the Four Seasons Centre for he Performing Arts, 145 Queen St. West, Toronto, Ontario. www.coc.ca
Posted by James Karas at 12:42 AM