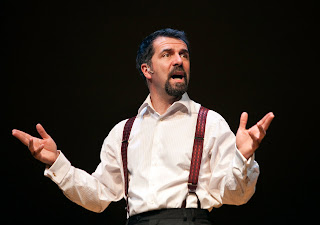 Fronteras Americanas is an ambitious, wide-ranging and stimulating one-man play that is performed by its author Guillermo Verdecchia. It is now playing at the Young Centre in a production by Soulpepper Theatre Company.

The title means American Borders and it refers to North and South America and the reference is of course ironic. Verdecchia tries to examine the immigrant experience from so many angles that at times you wish he would go for more depth and less breadth.

He describes Canada as a Noah’s Ark of a nation meaning, I suppose, there are immigrants from all over the world here. The image that is created in my mind is that all the animals are the immigrants and Noah and his family are the people who run the Ark. Not a particularly flattering picture.

Verdecchia is described as an Argentinean-Canadian and I find this a continuation and expansion of the Noah’s Ark image. He is a hyphenated Canadian as compared to the unhyphenated ones. In other words, Noah and his clan, the Saxons as Verdecchia calls them, are Canadians; the rest are Something-Canadians. Where do these hyphenated Canadians belong? They are not 100% Canadian and they are not 100% Something. The only place where they are most suited, most what? is perhaps on the hyphen. Who am I and where am I are constant questions for them.

Verdecchia touches mostly on Argentina, Chile, Mexico and Columbia from the “Hispanic” countries of the continent with passing glances at some of the others. He witnesses a shooting of a man from a hotel window and gives graphic descriptions of the event including the fact that no ambulance ever turns up. They pretend that he is abank robber but one is sure that it is a simple execution by the police. This is the 1990’s and dictatorships are the rule rather than the exception.

He gives an entertaining and idiosyncratic bird’s eye view of history starting about two hundred million years ago (I think) when the earth’s crust broke up and formed the continents. He brings it to the present and talks metaphorically and literally about himself as an immigrant child in a Canadian school whose teacher tries to pronounce his name to travelling to Los Angeles and trying to get entry with that name.

The drug cartels that provide jobs and social programs, social injustice, dictatorships, Hispanic culture from dancing to Latin rhythms to movie stars are grist for his mill. The image of the handsome, hot Latin lovers of the screen to the Mexican farm workers are fair game for commentary by the author. Fernando Lamas stands side by side with Jose Jimenez, Ricky Ricardo and Speedy Gonzalez.

Verdecchia speaks unaccented English but can put on several different Hispanic accents. By the way, why are these people called Hispanic? They have nothing to do with Spain.

Canada and perhaps even more so Toronto, may be a Noah’s Ark in its population mix but relatively few of the people who fill the theatres belong to the “animal population”. Verdecchia engages in some pointed but well-received humour about that.

There are some stills and film clips projected on a screen and costume and accent changes keep the play moving. A one-man show is notoriously difficult to do but Verdecchia has managed to find a formula to keep it going for more than two hours. It flags on occasion but Verdecchia, under the direction of Jim Warren, gives a bravura performance.
__________

Fronteras Americanas by Guillermo Verdecchia continues until June 12, 2011 at the Young Centre for the Performing Arts, 55 Mill Street, Toronto, Ontario. www.soulpepper.ca 416 866-8666.
Posted by James Karas at 11:24 AM