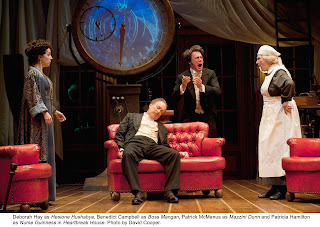 The Shaw Festival opened its 50th season with Heartbreak House. Shaw wrote the play between 1913 and 1919 and subtitled it “A Fantasia in the Russian Manner on English Themes.” Chekhov with tea and crumpets, perhaps? The play is set during the summer of 1914 and examines pre-World War I English society.

Heartbreak House is one of those plays that is long on verbosity, short on plot and has occasional bursts of wit. Most of Shaw’s plays are like that, of course. I have seen the play half a dozen times and have read it several times but have never been able to warm up to it. The current production at the Shaw Festival directed by Christopher Newton has not changed my mind much as I hoped it would. It has high production values but it is only fair that I warn you about my prejudices about the play.

On one level, Heartbreak House is the story of a dysfunctional but colourful family that receives some visitors to its large house in Sussex. Captain Shotover (Michael Ball) has advanced dementia. He does not recognize his daughter Ariadne (Laurie Paton) who is dropping by after a 23-year absence. He insists that another visitor is a pirate. He considers Ariadne’s husband a numskull. His other daughter Hesione (Deborah Hay) is married to a-good-for-nothing who thinks he is Lawrence of Arabia or something like that.

We know this is not just a family but also a portrait of sorts of England. These useless people are the English nation that is about self-destruct on the Western Front.

Newton tries to bring out the best of the verbosity and there are some successful moments when Shavian wit breaks through. Ball as the 82-year old Shotover appears a bit young and not sufficiently wild for the part. He should be more eccentric and out of this world to be convincing otherwise he looks just like an old man in the early stages of Alzheimer’s.

The central character of the play is Ellie Dunn (Robin Evan Willis) who represents youth, intelligence, cunning and strength. Willis does not look young or alluring enough for the part. She shows her strength when she gets the best of Boss Mangan (Benedict Campbell), the ruthless businessman but she is not quite what the role requires.

Deborah Hay does excellent work as Hesione, the smart and self-possessed woman who knows how to take care of herself. Patrick McManus is good as Mazzini Dunn, the idealist, but he looks simply too young to be Ellie’s father.

Benedict Campbell does superb work as Boss Mangan, the captain of industry who does not hesitate to destroy people’s lives in the course of business. He does not do as well in the business of love where he is supposed to marry Ellie but falls in love with Hesione and both ridicule him to distraction. He is a tycoon with no money and is one of the characters that Shaw and the audience fear and have fun with.

Blair Williams plays Hector, Hesione’s husband, the romantic man-about-town who makes up heroic stories about himself. He is outfitted to look like Lawrence of Arabia in some productions but in this he is dressed rather sedately with a fancy gown and a pistol.

William Dunn (William Vickers) breaks into the house and he is caught. He is a counterfeit burglar who wants to be caught and talk his way out of it and end up with money. Vickers does get a few laughs, of course.

The set by Leslie Frankish is superb. It represents the hull of a ship with curtains and bookshelves on the sides. In the final act, the curtains and shelves are removed and we have the impression of a ship at sea and in a storm. A good metaphor for England.

The hope that Canadian actors will achieve English accents is pretty much gone. Some of the accents were good (Benedict Campbell, Deborah Hay, William Vickers) others were acceptable in a pinch and the rest were deplorable.

It is difficult to enjoy a production of a play that you are not crazy about. You end up appreciating production values and getting through the text (it is worth something) but, unfortunately, you leave the theatre with little enjoyment.
______

Heartbreak House by Bernard Shaw opened on May 25 and will run until October 7, 2011 at the Festival Theatre, Niagara-on-the-Lake, Ontario. www.shawfest.com.
Posted by James Karas at 5:16 PM