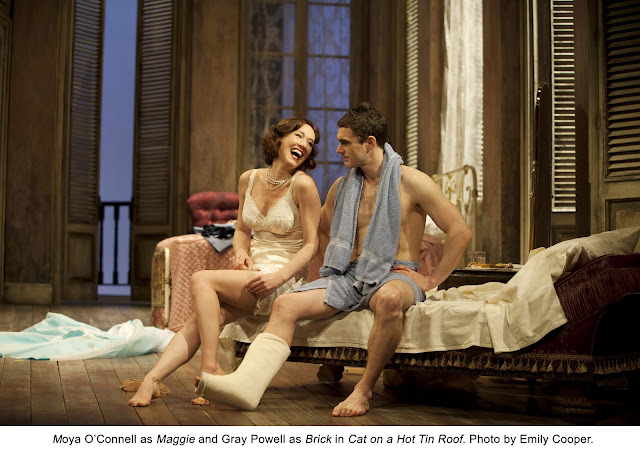 Tennessee Williams’ Cat On A Hot Tin Roof is a superb play that provides at least three roles for actors to display their talents on a large scale. Those roles require outstanding acting ability and the Shaw Festival has hit the mark with Moya O’Connell, Jim Mezon and Gray Powell.

Williams’ cat is Maggie (O’Connell), a beautiful woman from a poor background who marries the son of a wealthy but brutal tycoon. This is Mississippi where the rich own land, (twenty eight thousand acres, to be exact), and wield tyrannical power.

Maggie is married to Brick (Gray Powell) who is a broken down young man using alcohol as a crutch for his psychological issues and a real crutch for his fractured ankle which he broke on the high school track in an attempt to recapture his youth.

Brick had a best friend named Skipper who had a homosexual attraction to him. He committed suicide after having sex with Maggie and Brick went over the hill. This is not all that straightforward as Williams digs into the psyches of his characters but it is a good start.

Maggie is a sexual magnet, a woman fighting for her husband and her survival and she must manipulate her way to victory. She got rid of Skipper and almost lost Brick in the process. O’Connell is a superb Maggie. She has the physical beauty and sensual allure but also the emotional strength to wage all out war. In a play that is all about lying, she tells the biggest lie of them all – and she succeeds. A memorable performance by O’Connell.

The other great part provided by Williams is for a male actor with a booming voice and a personality of a bulldozer and the morals of an alley cat. Big Daddy (Jim Mezon) has built an empire in Mississippi but he hates his older son Gooper (Patrick McManus), cannot stand Big Mama (Corrine Koslo), his fat wife of forty years and despises his grandchildren.

He can do almost anything except fight off his own mortality. He was diagnosed with cancer but at the beginning of the play, he has just received a new lease on life. The test results indicate that he is free of cancer. That is a lie, of course, and as the plot unwinds, he finds out that the birthday that he is celebrating together with the good news about his health, is his last. Mezon delivers an outstanding performance. He bellows, insults, pushes around and in the end shows some humanity as the lion who is about to face death.

Brick hobbles around on a crutch as he continues to drink. He is a foil for Maggie in Act I and for Big Daddy in Act II. A splendid performance.

I don’t want to take anything away from the less central characters. Koslo is excellent as Big Mama, the much-abused wife of a tyrant and McManus’s Gooper and Nicole Underhay’s Mae are done superbly. Mae is Gooper’s pregnant and disgusting wife. Gooper is the greedy and equally disgusting. They all add up to excellent theatre.

Eda Holmes directs with sensitivity and precision in this nuanced production.
______

Cat on a Hot Tin Roof by Tennessee Williams continues until October 23, 2011 at the Royal George Theatre, Niagara-on-the-Lake, Ontario. www.shawfest.com.
Posted by James Karas at 11:25 PM