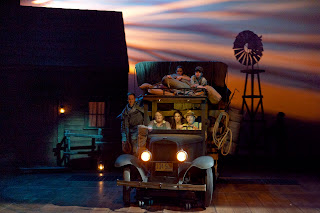 From left: Evan Buliung as Tom Joad, Janet Wright as Ma, Chilina Kennedy as Rose of Sharon and Paul Nolan as Al. On top: Abigail Winter Culliford as Ruthie and Gregor Reynolds as Winfield in The Grapes of Wrath. Photography by David Hou.

“The grapes of wrath” is a byword for the social injustice and mistreatment of people during the depression in the United Sates. The jalopy loaded with all the earthly possessions of a family trekking across the desert to California is an image imbedded in the American consciousness. The phrase and the image owe much to John Steinbeck’s 1939 novel The Grapes of Wrath. The novel, written on a grand scale, focuses on the Joad family from Oklahoma who are driven by drought and poverty to seek work as migrant workers in California.

Can and should a great or even a good novel be dramatized for the stage? It has been done often, of course, and the Stratford Shakespeare Festival has partaken of the habit. Pride and Prejudice, Moby Dick, The Brothers Karamazov, To kill A Mockingbird and The Hunchback of Notre Dame are some of the recent conversions of novel to play at Stratford.

Why? There is no shortage of plays, new or old to produce, so that availability of works for the stage can hardly be the excuse. Perhaps familiarity with the title will ensure greater attendance. You like the novel or, more likely, you have heard of it and will go see it on stage? Perhaps. Laziness on the part of the artistic director? Don’t dismiss it out of hand.

A novel like To Kill A Mockingbird which has a great courtroom drama may work to some extent. You may even be able to transfer some of the wit and plot of Pride and Prejudice but you will never capture Jane Austen’s style and you will end up with very little.

But trying to reduce The Brothers Karamazov to a two and a half hour drama is ludicrous. Which brings us to the current production of The Grapes of Wrath at the Avon Theatre.

Adapter Frank Galati takes up the superficial and melodramatic part of the Joads’ story and using a large cast brings it the stage. The extended family is being foreclosed on by the bank and must evacuate their Oklahoma farm. They are angry, of course, and to coin a phrase, there is no justice in what is happening to them.

They go to California and they are treated like dirt by employers and the authorities. There is social unrest, violence, a struggle for mere survival and in the midst, shreds of humanity and in the end a supreme act of the affirmation of life.

There are more than sixty characters in the play but there is no difficulty in following the story line. Evan Buliung plays a very sympathetic Tom Joad. Ma (Janet Wright) and Pa (Victor Ertmanis) are the matriarch and patriarch of the family who unite toughness and humanity in almost mythical form. Chilina Kennedy is the young and pregnant Rose of Sharon. She is a pathetic example of someone caught in a social and economic crisis with almost no weapons to resist. Tom McCamus is a former preacher who behaves with conduct unbecoming, one would say, but in the end is ready to sacrifice his life for justice.

Antoni Cimolino, the Festival’s General Director, directs the play and maintains crowd control. There were eight cast changes for the performance that I saw on June 4, 2011. The truck, the shantytown, the barbed wire, even the realistic storm and ditch were all there but they are not enough.

One should never lose sight of the fact that the Festival has theatres to fill and budgets to meet. If The Grapes of Wrath brings people, then there is a great compulsion to stage it. Fair enough, up to a point. A classical theatre Festival has an obligation to lead its audience and not just to pander to popular taste. There are countless plays from all over Europe and further afield that deserve to be shown. What you lose in revenue, you gain in prestige.

And next time, the General and Artistic Directors of the Festival hear of a great novel being dramatized for the stage, they should run off and buy a copy of the book and leave it and us at that.
______

The Grapes of Wrath adapted for the stage by Frank Galati from the novel by John Steinbeck opened on June 1 and will run until October 29, 2011 at the Avon Theatre, Stratford, Ontario. www.stratfordfestival.ca
Posted by James Karas at 11:13 AM