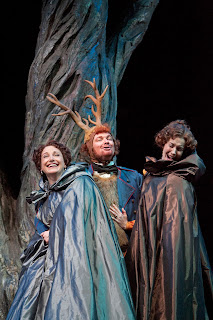 Scottish pipes, trumpets, cameras, limos and a fashion show. It must be the opening of the 2011 season of the Stratford Shakespeare Festival. The Governor-General is in attendance and some theatrical stars like Colm Feore!

The opener is The Merry Wives of Windsor, a light comedy even if not one of Shakespeare’s best plays, directed by Frank Galati. The American director comes with a long list of credits and awards for directing, acting and writing. He is a major force in the theatrical and operatic life of Chicago. We have the right to expect a lot from him.

The Merry Wives has enough structural infelicities and evidence of less than meticulous attention to detail of plot to convince one that Shakespeare wrote it in a big hurry. But we will let academics worry about that. The great attraction of the play is of course that larger-than-life- magnificent creation of Shakespeare known as Sir John Falstaff. He is best known for his appearance in Henry IV and Henry V which are set historically around 1400 but the bard had no difficulty in transporting him to the town of Windsor, some two hundred years later.

The main plot strand involves the impecunious Falstaff trying to woo Mistress Ford and Mistress Page and being put in a laundry bucket and being thrown into the Thames. The other main plot strand is the wooing of Anne Page by the foolish Doctor Caius and Slender as well as the upstanding Master Fenton. Guess who will get the girl.

There are many opportunities for broad comedy, rollicking fun and farce. What does Galati do?

He takes the play out of the Elizabethan period and sets it in Regency England. It is a period that is associated with Jane Austen, a great deal of formality, stiff manners and even stiffer clothes. Gone is the freewheeling atmosphere associated with Elizabethan England.

Galati refuses to be terribly inventive or give us farcical excesses that will send us roaring with laughter. There is very little laughter during the first half but comedy does break out (how can it not?) when we get to the fat knight being stuffed in the laundry bucket.

Geraint Wyn Davies plays Falstaff in tight breeches with a large pillow up his shirt and, although he is funny enough, he is not permitted to display the excesses of the outrageous knight. James Blendick plays Master Shallow, the ridiculous Justice of the Peace, with almost a straight face. He does get some laughs with his reactions to other characters but the humor should emanate from his foolishness and not from the silly conduct of others.

Slender, Shallow’s nephew and Anne Page’s suitor, is indeed played for laughs by Christopher Prentice and it is a job well done. The same can be said of Doctor Caius, the French physician, played successfully by Nigel Bennett and Hugh Evans, the Welsh parson played by Andrew Gillies.

Tom McCamus as George Page and Tom Rooney as Master Ford and Randy Hughson as the Host of the Garter Inn are almost wasted even though Rooney manages a few laughs when he appears as Master Brook. Lucy Peacock as Alice Ford and Laura Condlin as Meg are both good comic actors and they do fine jobs in their respective roles.

Galati puts the play in a Regency straitjacket and smothers the possibilities for broad humour and the result is only a good production. We have the right to expect more.

And speaking of Colm Feore, in 1982, the now famous star played the tiny role of Dr. Caius’s servant. He quickly rose through the ranks and has played some of the most difficult roles in Shakespeare from Iago to Coriolanus to Macbeth.

The cast list for The Merry Wives, under Townsfolk and Children of Windsor names Stephen Russell. The programme notes that Russell is in his 29th season at Stratford and this year, in addition to being one of the crowd in The Merry Wives, he is the Second Officer in Twelfth Night. These minor roles can be handled by anyone with the ability to walk. Why is a talented actor like Russell wasted on such parts? He has done outstanding work in many leading roles including a memorable Richard II in 1979. how has his star fallen that he is reduced to walking on stage and no more?

It is a question to be asked after the pomp and circumstance have subsided and we start reading the cast lists of today and yesteryear.
______

The Merry Wives of Windsor by William Shakespeare opened on May 30 and will run until October 14, 2011 at the Festival Theatre, Stratford, Ontario. www.stratfordfestival.ca
Posted by James Karas at 3:02 AM