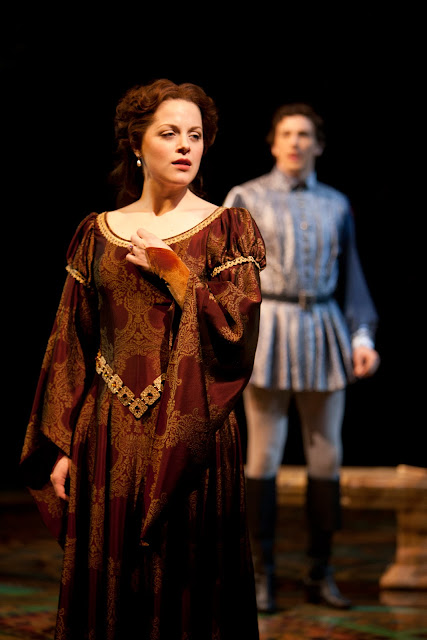 Kaylee Harwood as Guenevere and Jonathan Winsby as Lancelot in Camelot. Photography by David Hou.
Reviewed by James Karas

Camelot opened at the Festival Theatre in Stratford with two coups de théâtre. As the lights went on, a falcon alighted on a branch of a tree on the stage. We heard a whistle and the bird flew off and landed on the forearm of an old man. Then there was a musical flourish and everyone jumped up thinking it was the national anthem. No, they were the opening bars of Camelot, the grand musical by Lerner and Loewe based on the King Arthur legend.

Director Gary Griffin and a small army of people listed under “Artistic Credits” and “Production Credits” have produced a musical that deserves nothing less than a rave review and stock phrases like “a must-see” and “don’t miss it”.

Alan Jay Lerner who wrote the books and lyrics based on the novel The Once and Future King and composer Frederick Loewe chose their material well. The musical contains pomp and circumstance, a love story, humour, pageantry and some of the best songs heard on Broadway. The legendary King Arthur marries the beautiful Guinevere who falls in love with the French knight Lancelot.

But there is more than love and frolicking here. King Arthur is interested in justice, due process, trial by jury and the establishment of one of the great creations of civilization, the Common Law. He believes in the use Might for Right, in peace and in a borderless world. They don’t come any better than that.

Griffin and the Stratford Shakespeare Festival have assembled an extraordinarily talented cast. Geraint Wyn Davies plays and sings King Arthur. He looks great without the pillow stuffed up his short for Falstaff and he is quite magnificent.

Kaylee Harwood has a delicious English accent and an even more delicious voice and is there any wonder that Lancelot, the puritanical knight falls in love with her. Arthur is his friend and neither Lancelot nor Guinevere wants to hurt him but the force of love is more than they can withstand. We fall in love with her singing and her performance and are saddened when she ends up in a convent rather than with her lover.

Jonathan Winsby is the perfect Lancelot. He himself tells us in “C’est Moi” that he has achieved physical perfection, that he has never been beaten in battle and that he can perform a miracle or two. He is still a few steps short of spiritual perfection and although he has jousted with the best knights of the world, he has not taken on humility. He feels terrible about loving his friend’s wife and he wants to leave her, but he cannot find the right time: “If Ever I Would Leave You” he sings, it can’t be anytime during the year.

Brent Carver plays Merlin, the old wise man who lives backwards but disappears early in the play and then he (Carver) takes on the role of King Pellinore, the spaced-out king who is humane and funny.

Evil enters the kingdom in the guise of Mordred, Arthur’s illegitimate son. Mike Nadajewski plays Mordred with a thick and hilarious Scottish accent and sings “The Seven deadly Virtues” with conviction.

We also have a courtful of knights, squires, ladies and an invisible castle where Morgan le Fey (Lucy Peacock) rules. The pageantry and pomp and circumstance are handled with humour which is a much better way than a swashbuckling Hollywood movie.

I think I have raved enough about a thoroughly enjoyable night at the theatre and should just end the review by saying go and see the damn thing.
______

Camelot by Alan Jay Lerner (Book and Lyrics) and Frederick Loewe (Music) opened on May 31 and will run until October 30, 2011 at the Festival Theatre, Stratford, Ontario. www.stratfordfestival.ca
Posted by James Karas at 9:38 PM