DOUBLE BILL AND THE ALEPH FROM SOULPEPPER – POETRY, PROSE AND ENSEMBLE CREATIVITY 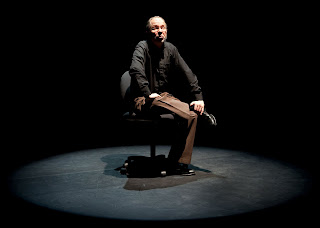 Diego Matamoros in The Aleph
Reviewed by James Karas

If you are in the mood for something completely different, theatrically that is, the best place to head for is probably The Young Centre for the Performing Arts in the Distillery District.

The redoubtable Soulpepper Theatre Compnay offers Double Bill, which consists of two distinct theatrical experiences. The first is entitled (Re)birth: E. E. Cummings in Song and the second Window on Toronto. The other offering is The Aleph, a one man show created by Diego Matamoros and Daniel Brooks based on a short story by Jorge Luis Borges. Brooks directs and Matamoros acts.

When you open the programme you will quite naturally look for the names of the authors of the two pieces of Double Bill. You will not find one. Both pieces are the creation of the Soulpepper Academy, a group of young actors you have come up with a couple of interesting items.

Cummings (1894-1962) was a prolific and popular poet but not someone you would expect to be featured on the Soulpepper stage. The Soulpepper Academy, consisting of ten actors/musicians/singers, has put together a musical of sorts based on seventeen poems by Cummings. It is all done under the musical direction of Mike Ross.

The music is traditional ranging from honky-tonk to folk music to Negro spirituals. There are a couple of dozen instruments used (I did not count them) from accordions to ukuleles.

There is much more than just singing. The ensemble also performs and dances in a variety of ways. There is movement, music, singing in a variety of rhythms and styles that keep the show moving. If there is internal unity provided by the poetry, I missed it because of the speed with which the show moves. The unity of the show is provided by the ten performers who produce something quite unexpected. I am not sure how much of the poetry one gets at that speed and in that format but the attempt is at the very least interesting.

Almost the same ensemble is involved in the second part of the Double Bill called Window on Toronto. The “window” is a hot-dog selling truck in downtown Toronto. We see the world from inside the truck as customers rush by buying hot dogs and making comments to Jason, the owner.

The activity in front of the hot dog truck is frantic, reflecting the city, I suppose. People go by and purchase food or make comments to the owner at machine gun speed. Not all of the lines are good but you are simply carried away by the speed with which everything happens in front of the truck. As one would expect in the center of a large city, there are all kinds of people form locals to tourists, from peddlers to criminals that stop or dash by the hot dog vendor.

The Aleph is a short story whose central image The Aleph is, according to Borges’s story, “the only place on earth where all places are -- seen from every angle, each standing clear, without confusion or blending.”

Brooks and Matamoros have adapted the story as if it were the latter’s autobiography. Matamoros is a good and entertaining story teller. He even distributes a photo of himself as a young man. Borges too pretends that the short story is autobiographical.

The only issue I have with the play is that it does not and I have little doubt that it simply cannot translate the supernatural element of the story into a performance. Borges spends some time describing the experience and the reader tries to follow the author’s imagination. The adaptation and the performance have more limitations than a reading of a fantastical story. You end up enjoying everything but missing the central point not for lack of trying by Brooks and Matamoros but because it is impossible to convey what only the imagination can conceive.