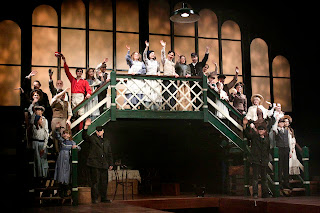 The cast of the Toronto Production of The Railway Children. Photo by Cylla von Tiedemann.

When you have railroad lands with a railway and a roundhouse, and a play called The Railway Children the only thing to do is produce the play. If you don’t have a theatre, you simply put one up, bring a steam locomotive from England (the play takes place there, after all) and you are off.

That is what is happening at the foot of the CN Tower where Edith Nesbit’s play is now showing in the newly constructed tent theatre called appropriately enough the Roundhouse Theatre. This is a production with an all-Canadian cast of the play that was originally produed at The York Theatre Royal in England.

The Railway Children is based on the 1906 children’s novel by Edith Nesbit which has been converted into a play by Mike Kenny. It is a paean to the British spirit and especially those plucky children.
A well-off English family that has a nice house and servants in London falls on hard times. The father is led away from his home and we are left to wonder where to and why. The family moves to Yorkshire and must live in poverty.

The children, Roberta (Natasha Greenblatt), Peter (Harry Judge) and Phyllis (Kate Besworth) will spend much of their time around the railroad station and on the railroad. In times of adversity, they will display courage, determination, versatility, presence of mind and, in a word, pluck. When a train is about to crash into some obstacle on the railway, the girls take off their red undergarments and warn the conductor. The children prevent a serious accident and become a credit to the nation.

They find gifts for the nice Mr. Perks (Craig Warnock) and give him an object lesson in generosity and grace when he momentarily loses his temper and thinks they are condescending and insulting him. It is all very heart warming.

When the mother (Emma Campbell) becomes ill, they bring in a doctor (Richard Sheridan Willis, who plays three other roles) and find a way to get help from a wealthy Old Gentleman (John Gilbert.)
This is an old type of wonderful narrative about meeting bad luck or misfortune head on, maintaining the attitude of “there is always hope” and in the end triumphing.

The stage resembles the platform of a railway station with the tracks in the middle. There are moving platforms in the middle that are wheeled along the tracks to connect both sides of the side platforms for scenes that do not take place at the station.

Director Damian Cruden has the children and the other actors of a large troupe run up and down the platform frequently. The coming and going of trains is indicated by sound and lights except for the times that the imported locomotive is brought out. Set and Costume Designer Joanna Scotcher, Lighting Designer Richard G. Jones and Sound Designer Craig Vear create a marvelous atmosphere and considerable spectacle.

It is a nice story about three children, family, friendship, generosity and decency. It is well done in a rather unusual setting. One may question the efficacy of a theatre that resembles all too accurately a railway station. The actors are miked and some of the action is a considerable distance from the audience. But they generate energy and humour and you get wrapped up in the excitement of the narrative. In the end it is a very pleasant night at the theatre.
_____
The Railway Children by Mike Kenny based on novel by Edith Nesbit opened on May 8 and will run until September 4, 2011 at Roundhouse Theatre, 255 Bremner Street, Toronto, Ontario. www.mirvish.com/
Posted by James Karas at 2:15 PM