THE MERRY WIVES OF WINDSOR - REVIEW OF 2019 STRATFORD FESTIVAL PRODUCTION

The Merry Wives of Windsor is a pleasant suburban comedy that can be amusing in an ordinary production or quite hilarious with the right director and first class actors. With Artistic Director Antoni Cimolino directing the production, we can reasonably expect some of the Stratford Festival’s best people in the cast and our expectations are fulfilled.

The upgrade from amusing to hilarious falls squarely in the hands of the director. The production displays Cimolino’s creative talent and inventive imagination and the result is an evening of full-hearted laughter.

Cimolino sets the play in a small town around 1950, more or less familiar territory to everyone, directly or indirectly. The town is pleasantly alive with children skipping rope and playing, women going to the beauty parlor, men going to the barber or the bar and presenting a wonderful atmosphere. 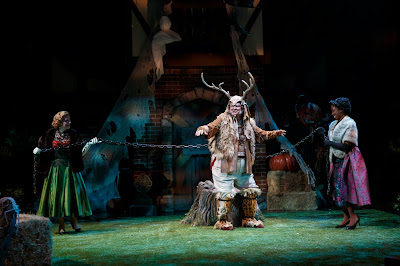 When it comes to provoking laughter, Cimolino does not miss a trick. There are double-takes and pratfalls, of course. When Falstaff tells the duped husband Ford (who pretends to be Brooke) how he hid in his house, he wipes his crotch with a towel and throws it on Ford’s head. It is hilarious and one of numerous directorial inventions that keep the laughs coming frequently without direct help from the text.

Geraint Wyn Davies is a riotous Falstaff. The braggart, the sponger, the would-be seducer of two upstanding wives of Windsor, can make us laugh with his ridiculous ambitions, his setbacks and humiliations. He is a scoundrel and we love him.

He has amusing if not faithful cronies in Bardolph (David Collins), Nym (Farhang Ghajar) and Pistol (Randy Hughson). You should see their 1950’s chic haircuts! But he also has powerful adversaries in the smart women of Windsor, Mrs. Ford (Sophia Walker) and Mrs. Page (Brigit Wilson). Sporting 1950’s suburban high fashion and intuitive intelligence, they plot sweet revenge on Falstaff and a lesson in the evils of jealousy on Mr. Ford (a hilarious Graham Abbey).

Watching Ford as Brooke reacting to Falstaff’s narrative of attempting to seduce Mrs. Ford is an absolute gem of comedy.

Ben Carlson is a riot as the pedantic Welsh parson and teacher and like Gordon S. Miller as the ridiculous Dr. Caius, he seems to be having as much fun as he is transmitting to the audience. Remember Miller was the evil Iago a few days ago? Michael Blake who shone as Othello earlier in the week shows that he can handle a comic role as Mr. Page. 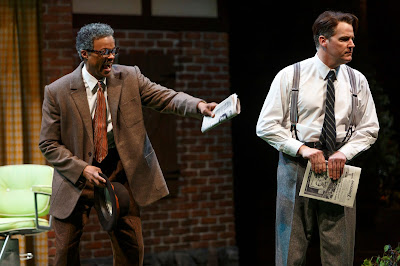 Michael Blake (left) as Mr. Page and Graham Abbey as Mr. Ford. Photo: David Hou.
Michael Spencer-Davis as Justice Shallow is well matched with Jamie Mac as his nephew Slender. We get the foolish justice and his even sillier sidekick who wants to marry the lovely Anne Page (Shruti Kothari). So does Dr. Caius but she will outwit everyone and marry her love Fenton (Mike Shara). What’s comedy if the young can’t outsmart the old?

Lucy Peacock gets the relatively minor role of Miss Quickly, Dr. Caius’s housekeeper and confidante of Anne Page. We remember the character better as Mistress Quickly, the inn keeper with tortuous English and quick at something. Peacock gets an easy night and we know she is one of the best.

The set by Julie Fox shows an indication of a Tudor house but it can be anywhere in a small town. There is an emphasis on beds and getting in and out of them for obvious comic reasons.

A great night at the theatre.
_________________
The Merry Wives of Windsor by William Shakespeare opened on June 1 and will play in repertory until October 26, 2019 at the Festival Theatre, Stratford, Ontario. www.stratfordfestival.ca

James Karas is the Senior Editor - Culture of The Greek Press. www.greekpress.ca