Little Shop of Horrors carries a highly contagious microbe that infected the audience in the Avon Theatre, Stratford, as soon as the lights went on the stage and the show began. The infection held them prisoners until the lengthy curtain calls at the end making everyone applaud, laugh and make noises of approval relentlessly. Theatre companies are well advised to find and adopt the microbe for their productions.

Little Shop, with book and lyrics by Howard Ashman and music by Alan Menken, has a simple plot and a genial approach to some awful events. It is more of a cartoon but horror shows can be quite cartoonish. 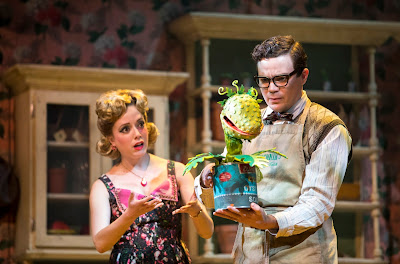 Gabi Epstein as Audrey and André Morin as Seymour Krelborn. Photo by Chris Young.
The plot? A nerd called Seymour Krelborn (André Morin) works in a florist shop and he discovers a plant that likes human blood, talks and progresses to grow huge and feed on human flesh like whole human beings.

The flower shop is owned by the rough-and-ready Mr. Mushkin (an excellent Steve Ross) and the pretty and very tacky Audrey (Gabi Epstein) works there too. You guessed it, Seymour is hopelessly in love with her. In fact, he names the flesh-eating plant Audrey II.

There is a small problem. Audrey has an abusive and sadistic boyfriend called Orin (Dan Chameroy) and, let’s cut to the chase, he ends up as a meal for Audrey II. After a few meals and revelations, we find out to our horror that Audrey II is a far more nefarious plant and there is a plot that we could never have imagined. The apocalypse is upon us. No more hints.

The action takes place on skid row where we find the usual denizens as well as a fine parody of the Supremes with Vanessa Sears as Ronnette, Starr Domingue as Crystal and Camille Eanga-Selenge as Chiffon. They alone produce enough energy to light a whole town.

Morin as the nerdy florist is superbly entertaining as we watch him develop from a schmuck into a greedy American. The pathetic Audrey of Epstein dreams of a better, simpler life with Seymour. Dan Chameroy as Orin the dentist, wearing leather and riding a motorcycle, does an Elvis Presley impersonation and he seems to be enjoying the role as much as the audience loves what he is doing. And he plays a few other roles as well. Again, a super-charged performance.

The set of skid row and the interior of the florist shop first without and later with a fully grown flesh-eating monster is by Michael Gianfrancesco with costumes by Dana Osborne, lighting by Michael Walton and projection design by Jamie Nesbitt. Audrey II looks like a huge, nasty frog with a gaping mouth which can take whole human beings. There are puppeteers that operate it, of course, and Matthew G. Brown provides the voice. 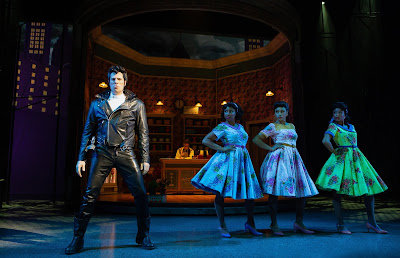 Dan Chameroy as Orin, the Dentist, Starr Domingue as Crystal, Vanessa Sears as Ronnette
and Camille Eanga-Selenge as Chiffon. Photography by Cylla von Tiedemann
The 1960’s rock music under the direction of Laura Burton had the same riotous effect on the audience as just about every movement by the cast.

Director and choreographer Donna Feore once again deserves much of the credit for overall thrust, indeed propulsion, of the uproarious and infectious production.

Little Shop of Horrors has been around as a stage musical since 1982 and it has been produced with great enthusiasm and success around the world. It is science fiction and comedy but it is also a serious parody of insatiable American greed in the glorious years of Ronald Reagan’s presidency.
__________
Little Shop of Horrors by Howard Ashman (book and lyrics) and Alan Menken (music) opened on May 31 and will run in repertory until November 2, 2019 at the Avon Theatre, 99 Downie Street, Stratford, Ont. www.stratfordfestival.ca

James Karas is the Senior Editor - Culture of The Greek Press.  www.greekpress.ca/
Posted by James Karas at 10:37 PM