Henry VIII is not the most frequently produced play of the canon by any stretch. It belongs to the “canon” most likely because Shakespeare wrote at least half of it. The other half is credited to John Fletcher by some but there is no agreement among scholars about who wrote how much. This is the Stratford Festival’s fourth production in sixty eight years, the previous ones being in 1961, 1986 and 2004.

There are more cogent reasons than authorship for the reluctance to stage the play. It has 47 characters and it is played in about a dozen locations. The latter is usually not a problem but when you have a grand banquet and masque thrown by Cardinal Wolsey, a courtroom scene, a coronation procession, and a royal baptism you would run out of space in the small Studio Theatre and out of dough in the bank. 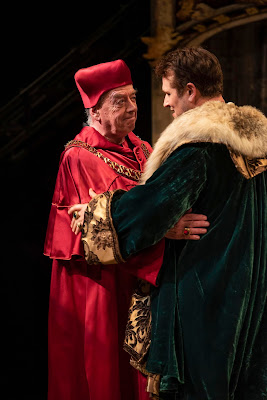 Rod Beattie (left) as Cardinal Wolsey and Jonathan Goad as King Henry VIII.
Photography by Emily Cooper.
Martha Henry risks neither eventuality by directing a pared down production that does justice to a play that treads very nimbly over the treacherous history of King Henry VIII and was produced either during his daughter’s reign or some years after her death.

We see King Henry VIII (Jonathan Goad) in his youth, strong, handsome, and virile. He rules over a treacherous nobility, has the brilliant, arrogant and ruthless Cardinal Wolsey (Rod Beattie) as his most trusted adviser and his conscience is bothering him about having married his brother’s widow, Katherine of Aragon (Irene Poole). His conscience may more likely be pricked by the lack of a male heir and the presence of the beautiful and young Anne Boleyn (Alexandra Lainfiesta). Henry sees through Wolsey’s treachery and puts his thumb on the more troublesome nobles in a fine performance by Goad.

The most impressive performance is given by Irene Poole as Katherine. Katherine is being thrown over and her child Mary, the heir apparent, is being bastardized. She stands up to the nobility who would try her, speaks with poise and assurance and in the end finds a kind of victory in defeat. Admirable work by Poole. 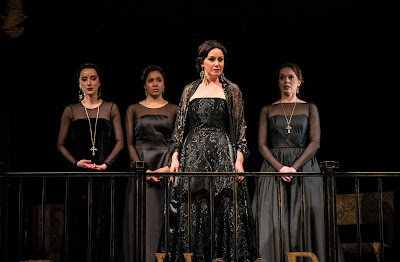 Alexandra Lainfiesta as Anne Boleyn, Oksana Sirju as Jane Seymour, Irene Poole as
Queen Katherine and Jacklyn Francis as Patience Maria. Photo: Emily Cooper.
The most disappointing performance is that of Rod Beattie as Cardinal Wolsey. We understand that Wolsey was the most powerful man in England after the king, he rose from the lower ranks and wielded ecclesiastical authority as a Cardinal and political power as Lord Chancellor of England. That authority and power must be made visible to and felt by the people around him and by the audience. Beattie displays neither. He speaks in a monotone that is more becoming to a modest lord than to an arrogant man.

Tim Campbell has an impressive voice and physical presence as the powerful Duke of Buckingham who is falsely accused of treason. The Duke is convicted of the crime but accepts his fate without losing his dignity.

Henry and designer Francesca Callow have opted for the colour black wherever possible. The nobles wear mostly black velvet hats and black fur capes. Queen Katherine and her ladies are dressed in black gowns and for all of them you had to watch and listen carefully to tell who is who.

The set consists of a balcony at the back of the stage which serves for the King and some of the lords to stand on when necessary. It serves the production well when we see the newly crowned Queen Anne Boleyn dressed in a white gown standing on the balcony with Katherine underneath her.

Henry VIII was a monster and Shakespeare and Fletcher crafted a politically safe, middling play about a part of his reign. Martha Henry does a fine job of doing the best within those parameters and giving us a chance to see the play. If you want to see the play four more times at the rate the Stratford Festival produces it, make arrangements to be around until 2087.
______________
Henry VIII by William Shakespeare and John Fletcher opened on May 29 and will   continue in repertory until October 12, 2019 at the Studio Theatre, 34 George Street East, Stratford. Ontario. www.stratfordfestival.ca

James Karas is the Senior Editor - Culture of The Greek Press
Posted by James Karas at 2:34 AM