THE LION KING – REVIEW OF 2019 SPECTACULAR APPEARANCE IN TORONTO

The Lion King, the spectacular musical that has been seen by one hundred million worldwide is back in Toronto at the Princess of Wales Theatre.

It is a show that gets thunderous ovations during its two hours’ performance but the question is how can you top that thunder? Answer: get one of the animals to say “Go raptors.” All hell broke out when the hornbill Zazu (Greg Jackson) adlibbed those 2 words on June 14.

The Lion King, it goes without saying almost, has all the elements of a supremely successful musical: a very good plot, drama, humour, wonderful musical numbers, songs and dance sequences. All the characters are animals in Africa but for those with a certain bend, it has Hamletesque overtones. 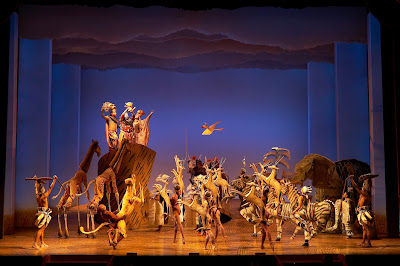 “The Circle of Life” from THE LION KING. ©Disney.
Photo Credit: Brinkhoff-Mogenburg.
The most important and grandest element of the show is spectacle. From the minute that the curtain raises, we are treated to a parade of animals that come down the aisles and march on the stage in a grand display of colour, pageantry, shapes, masks and puppets that make your jaw drop. And that is just in the first few minutes. And it is only a foretaste.

It looks as if a substantial number of animals, via masks and brilliantly handled puppets have migrated to the theatre where they are menacing, funny, dramatic and thoroughly absorbing.

The music and songs are melodious, dramatic, humorous and enjoyable. Some of them like “Hakuna Matata” have become a part of popular culture. The singing is excellent and the wide-ranging dances from the portrayal of the green savannah to the frightful hyenas are superb.

The plot is simple and should be familiar. The good lion King Mufasa (an impressive Gerald Ramsey) has a rambunctious young son Simba (a lively Walter Russell III). Simba and his young friend Nala (a vivacious Celina Smith) go to the forbidden elephant graveyard against parental advice but on the recommendation of the evil brother of Mufasa, Scar (Spencer Plachy).

Well, Scar engineers the death of King Mufasa, takes over the kingdom and sends Simba into exile. The kingdom does very badly after that.

But adult Simba (Jared Dixon) and adult Nala (beautiful-voiced Nia Holloway) along with the hilarious meerkat Timon (Nick Cordileone) and warthog Pumbaa (Ben Lipitz) return home and the rest is the fight for the happy ending.

In the meantime, we have treason, regicide, usurpation of power, dispossession of the rightful heir, evil rule and Shakespearean tragedy. Good grief, this is Hamlet, King Richard II and King Richard III reenacted in the animal kingdom. 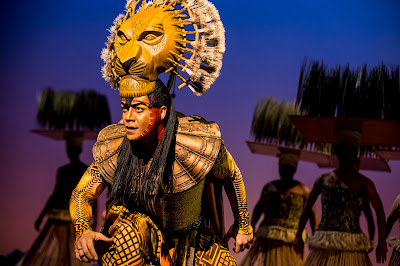 Gerald Ramsey as “Mufasa” in THE LION KING North American Tour.
©Disney. Photo by Matthew Murphy
Elton John and Tim Rice are credited with the music and lyrics but there are five more people who provide “additional music and lyrics” including the director, Julie Taymor.  The Disney organization sure knows how to put a show together.

A notable pleasure of the evening was the presence of a large number of children in the audience. Their enthusiasm was infectious but I noticed one little girl that had an aisle seat jump into her father’s lap and stay there to the end. Those hyenas that went within inches of her probably scared the delights out of her. A small boy enjoyed the show but when he saw the spurts of smoke he thought there was a fire and was ready to run out of the theatre.

The average age of theatre audiences seems to be between that of Moses and Methuselah but the presence of youngsters in The Prince of Wales may have reduced it to barely above the drinking age. There is hope for the theatre.

James Karas is the Senior Editor – Culture of The Greek Press. www.greekpress.ca
Posted by James Karas at 2:09 AM