The Stratford Festival has once again trod on the well-charted but somewhat treacherous field of Noel Coward comedies. They appear easy but they require a style of acting and detailed directing to bring out the best in them. Otherwise the thin plots may lead the production to fall on its face and the audience to fall off their chairs and nap on the floor.

The newly married Sibyl (Sophia Walker) and Elyot Chase (Geraint Wyn Davies) are standing on the balcony of a luxury hotel in the south of France on a moonlit evening looking at a large yacht in the water. They are on their honeymoon. 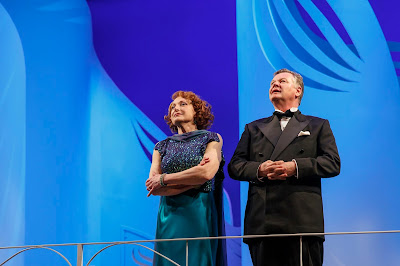 Lucy Peacock as Amanda and Geraint Wyn Davies as Elyot.
Photo by David Hou.
On the adjoining balcony, we see Amanda (Lucy Peacock) and Victor Prynne (Mike Shara) who are also on their honeymoon. We quickly find out that for Elyot and Amanda this is their second honeymoon because they were married to each other and still love each other.

You can guess the rest of the plot.

Coward provides scintillating dialogue as the two newlywed couples begin to bicker. Yes there is a rich trove of laughter if done properly. The laughter depends on gestures, pauses, intonations, facial expressions and reactions by the characters. In other words you need careful and detailed work by the director to get every ounce of pleasure from the dialogue.

Perloff directs, the actors deliver and the audience enjoys. Amanda and Elyot are usually played by relatively young actors. In this production they are mature adults with Davies (60 +) and Peacock (60 - ) but they are attractive, vivacious, witty and simply delightful.

A few lines into the play, the very feminine, younger and exultant Sibyl asks Elyot if he is happy. “Of course I am. Tremendously happy” he replies. Delivered straight, the line would land with a thud. But with a slight rise in the voice and a small pause in the middle, it becomes a funny line full of premonition. The cheerful Sibyl expresses her delight that the two are married and Elyot answers “Yes, things have come to a pretty pass.” Give the line right intonation and you get a good laugh. Say it straight and it makes no impression at all. 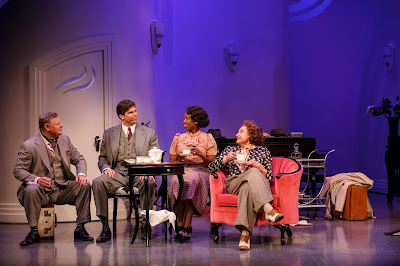 Geraint Wyn Davies as Elyot, Mike Shara as Victor, Sophia Walker as Sibyl and
Lucy Peacock as Amanda. Photography by David Hou.
Victor and Amanda are the obverse of Elyot and Sibyl as they carry a parallel conversation on the balcony. “Do you love me?” asks the romantic but somewhat dense Victor. “Of course, that’s why I’m here” replies the sharp-witted Amanda. Lucy Peacock has a certain twang to her voice that simply sharpens her lines and makes a highly effective Amanda.
Victor insists on talking about Elyot and tries to paint a bleak picture of Elyot while Amanda tries to agree with him but cannot hide her love for her first husband. The result is wonderful comedy.

And so it goes on between the two couples until Elyot and Amanda are left alone and we get a taste of their former life together as they take off for Paris leaving their second spouses behind. All of these bits of dialogue and much more are funny because of the detailed directing and precise delivery by the cast.

The scene in Amada’s Paris apartment is the denouement as they have fun and then fight. The last scene with all four characters on stage that break into fights unfortunately misfires. The final scene where Victor and Sibyl go at each other and should create mayhem allowing Amanda and Elyot to escape unnoticed does not work as well as the rest of the production.

The set by Ken MacDonald representing the balcony of a luxurious hotel by the sea also looks like the deck of a luxury liner and is quite beautiful. With some modifications it serves largely as the set for the Paris apartment.

The dresses of the women by designer Christina Poddubiuk are simply gorgeous and the men are dressed nicely too but one’s attention is not quite focused on them. The lifestyle of Amanda and Elyot tickles the imagination by its lavishness and lack of normal impediments to human happiness.

What more can one ask for?
__________
Private Lives by Noel Coward opened on May 30 and will run in repertory until October 26, 2019 at the Avon Theatre, 99 Downie Street, Stratford, Ont. www.stratfordfestival.ca