Brigadoon, the Shaw Festival’s big musical offering for the season, has a great deal to offer. It has marvelous melodies by Frederick Loewe and a wonderful book by Alan Jay Lerner. It has humour, love stories, the attraction of a simple life in a mythical village in the Scottish highlands, the triumph of love and in all it is a grand musical.

The Shaw Festival production directed by Glynis Leyshon and using a revised book by Brian Hill captures many of the virtues of the musical but it is also disappointing in some respects.

Two young New Yorkers are hunting in the Scottish Highlands as part of a bachelor party. Tommy Albright (George Krissa) is about to get married but he and his friend Jeff Douglas (Mike Nadajewski) lose their way in the woods. They end up in the magical village of Brigadoon hidden in the mist and mountains which does not appear on the map. 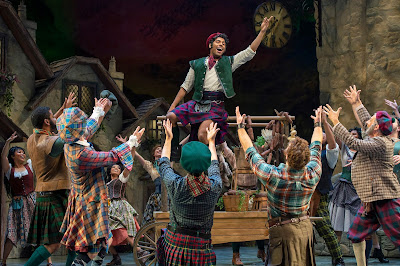 Matt Nethersole as Charlie Dalrymple with the cast of Brigadoon.
Photo by David Cooper.
They find out from Mistress Lundie (Patty Jamieson) that the village appears only for one day in every 100 years because the residents want to maintain their pristine way of life. If anyone leaves, the magical existence ceases.

The production has a cast to fill a village and most of them are kept pretty busy. They have a lot to accomplish in one day, I suppose. Jean (Madelyn Kriese) is about to marry Charlie (Matt Nethersole) but Harry (Travis Seetoo) is going into catatonic depression because he is madly in love with Jean. Maggie (Genny Sermonia) is crazy about Harry but that is not enough for him.

Fiona (Alexis Gordon) falls for Tommy (and vice versa) and the lively Meg (Kristi Frank) goes after Jeff. But the distraught Harry runs away thus endangering the very existence of Brigadoon. He meets an unhappy end. Tommy and Jeff return to New York but Tommy’s fiancée Jean has nothing to offer compared to Fiona and Brigadoon. The friends return to the highlands looking for Brigadoon. Amor vincit omnia.

Once you get past the atrocious Scottish accents of the cast, the idea and charm of the story will carry you splendedly. The idea of a simple life no matter if it is mythical is always attractive. The humour and the drama of the unhappy lover are handled well, romances are humorous or moving and we simply like where we are. We love the people, we love the place and we love the idea. 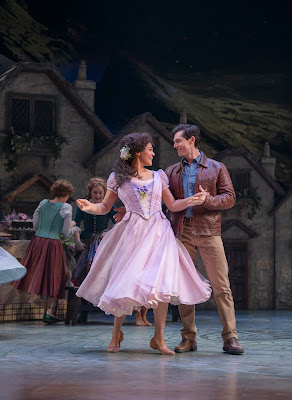 Alexis Gordon as Fiona MacLaren and George Krissa as Tommy Albright
with the cast of Brigadoon. Photo by Emily Cooper.
The singing and dancing are not always up to snuff. Many of the cast are barely adequate vocally and the few that can hold and belt out melodies are not enough to carry the show into the upper echelons of a production. The choreography suffers the same fate with few dancers that show superior talent.

The sets by Pam Johnson, from the environs of the village to Brigadoon itself are gorgeous. The lush greenery, the rising mists, the imposing mountains are all of mythical beauty. The costumes by Sue LePage are traditional and beautiful. The kilts, the bagpipes and the rest convince us we are in another world. Decent accents would have nailed the location as a Scottish other world. The projections by Corwin Ferguson bring reality to our faces with pictures of war.

Despite some disappointing aspects, this Brigadoon has many pleasures to offer.
______
Brigadoon by Alan Jay Lerner (book and Lyrics) and Frederick Loewe (music) continues until October 13, 2019 at the Festival Theatre, 10 Queen’s Parade, Niagara-on-the-Lake, Ontario. www.shawfest.com.