It is opening week at the Stratford Festival and Billy Elliot The Musical was only the second show to open. But there is no doubt that it will be the smash hit of the season. It is a great musical and Director and Choreographer Donna Feore gives it such a rousing, gorgeously sung and spectacularly danced production that  the audiences was enthralled from beginning to end.

Billy Elliot has been recognized as a great musical and indeed a masterpiece. It deals with a wonderful and heartwarming story of an eleven-year old boy from a working class background who wants to become a ballet dancer. He is an orphan and in his community the boys put on the gloves and box, and dancing is the simply not for boys, to put it politely. 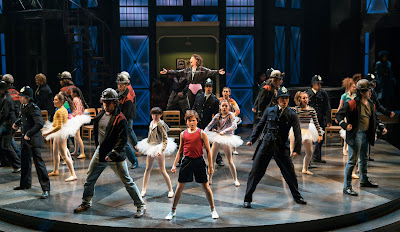 Nolen Dubuc (centre) as Billy Elliot with members of the company in
Billy Elliot the Musical. Photo by Cylla von Tiedemann
Billy Elliot is played by Nolen Dubuc, a spitfire of an actor, singer and dancer. He is an orphan who imagines seeing his dead mother (Vanessa Spears). He lives with his grandmother (Marion Adler) and his father Jackie (Dan Chameroy) and brother Tony (Scott Beaudin), both tough miners in a coal mining town in the throes of a strike and dissolution, Billy goes for ballet lessons, shows talent and courage but his father forbids him to continue.

Chameroy does a fine north England accent, sings with gusto and has to face the wrath of the striking co-workers by becoming a “scab” when he breaks rank and returns to work. A superb portrayal of a proud man who faces the disappearance of his world and needs to change attitudes about his young son’s preferences.

Billy’s brother Tony is just as tough and politically involved in the strike. Blythe Wilson plays the thin, middle age Mrs. Wilkinson who tries to teach young girls ballet. She is the soul of decency, patience and understanding. She can recognize talent when she sees it and is brutally honest about her talent as a dance teacher. Wilson has a hold on our heart from beginning to end.

Billy’s story is entwined with his gay friend Michael (Emerson Gamble), his grandmother, strong, funny and moving, and the miners, rough-hewn men facing an unthinkable future.
Their perseverance to save their jobs and way of life is pitted against the power of the government of Prime Minister Maggie Thatcher and the police. It is an ugly confrontation expressed in powerful song and dance sequences choreographed with surpassing beauty, muscle and precision by Feore.

Elton John’s music is in turn sinewy, powerful and lyrical. The musical deals with that rarity, the combination of a great social issue with the private life of a family and the fate of an entire community. Lee Hall’s book is dramatic, humorous and fast moving. But the real hero of the production is Donna Feore for her directing and choreography.

The highlight of the musical is the pas de deux danced by Dubuc and his adult counterpart, Colton Curtis. Dubuc soars through the air, assisted by a guy wire, but the dance by the two of them is an ethereal display of beauty in motion to the music of Tchaikovsky 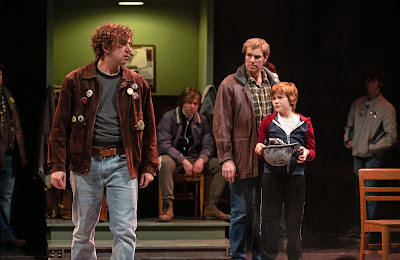 From left: Scott Beaudin as Tony Elliot, Dan Chameroy as Billy's Dad and Nolen Dubuc
as Billy Elliot with members of the company. Photo by Cylla von Tiedemann.
The set by Michael Gianfrancesco is the essence of simplicity. We have the Elliot family kitchen with a spiral staircase leading to Billy’s bedroom, the school auditorium and union hall as the main scenes. Most is done by the use of judicious lighting and use of projections.

Billy Elliot has a huge cast from the strikers and policemen who clash, to the ballet girls to grandma’s suitors to puppeteers to a good size orchestra under conductor and music director Franklin Brasz.

Opening night audiences in their reactions are sometimes as trustworthy as Helen of Troy. But on the opening night of Billy Elliot the communication between stage and audience was simply electric. Almost nothing happened on the stage that did not evoke an enthusiastic reaction from the spectators. It was simply magical and highly enjoyable.

Just in case I have not said it, Billy Elliot is without a doubt the big hit of this Stratford Festival season. Go for it.
_________________
Billy Elliot The Musical by Lee Hall (book and lyrics) and Elton John (music) opened on May 28 and will play in repertory until November 3, 2019 at the Festival Theatre, Stratford, Ontario. www.stratfordfestival.ca

James Karas is the Senior Editor - Culture of The Greek Press
Posted by James Karas at 10:25 PM