MAOMETTO II by Gioachino Rossini. Luca Pisaroni (Maometto II), Leah Crocetto (Anna), Bruce Sledge (Erisso), Elizabeth DeShong (Calbo), Charles Sly (Condulmiero). Conductor Harry Bicket. Director David Alden. Set & Costume Designer Jon Morell. Until May 14 2016 at the Four Seasons Centre, 145 Queen St. West Toronto. www.coc.ca
**** (out of five)
When you see an opera that was first performed in 1820 getting its premiere with the Canadian Opera Company, your only response should be to line up for tickets. Maometto II has its shortcomings, no doubt, but it gets a highly creditable production by the COC that succeeds in most departments.

The COC uses the production created by Santa Fe Opera directed by David Alden with Set and Costume Designs by Jon Morrell. If you are looking for another Barber of Seville, you are in the wrong place. This is Rossini waxing dramatic, melodramatic and long. 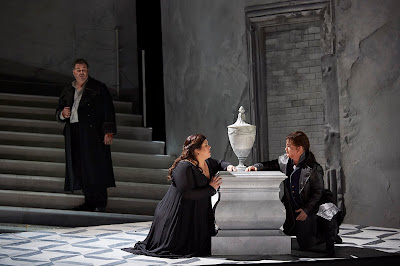 (l-r) Bruce Sledge as Paolo Erisso, Leah Crocetto as Anna and Elizabeth DeShong as Calbo
in the COC’s production of Maometto II, 2016, photo: Michael Cooper
After the fall of Constantinople in 1453, the Ottomans plan to invade Western Europe. But first they must defeat the Venetians who control Negroponte, the gateway to the Western Mediterranean. The Ottomans are led by the dashing Sultan Maometto II (Mehmed or Mohammed) sung by the dashing bass-baritone Pisaroni. Except for the minor character of Selimo (Aaron Sheppard) and the soldiers from the Ottoman side, Rossini and his librettist Cesare della Valle focused their attention on the Venetians.

Militarily, the Venetians are toast and they sing of dying in a blaze of glory. All of which would make a very short opera except for the fact that Anna, the daughter of Erisso, the Venetian Commander, is in love. She fell in love with Uberto who turns out to have been a disguised Maometto. She is intended for General Calbo, a pants role in which American mezzo-soprano Elizabeth DeShong excels.

The Ottomans defeat the Venetians and the commanders are taken prisoners. As you may have guessed, the passionate Anna of soprano Leah Crocetto learns of her error and is not prepared to marry the infidel Maometto who still loves her. A tragic end ensues.

Aside from the love interest, Maometto II espouses a martial ethos with an emphasis on heroism in battle, glory in death and patriotic zeal that is exaggerated even by operatic standards. The creaky plot is exacerbated by Rossini continuing with and repeating phrases long after we got the gist of them. That is how he gets more than three hours.

But that is only part of the story. There are splendid arias and ensemble pieces. The COC chorus as Turks or Venetians does superb work. The richly orchestrated music is impressive and done rousingly by the COC Orchestra conducted by Harry Bicket. 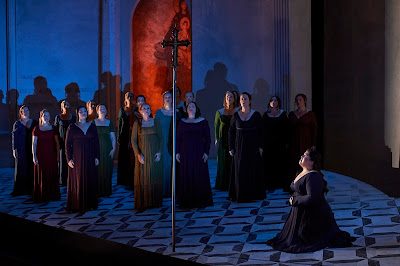 AlLuca Pisaroni as Maometto II (centre) in the COC’s production of Maometto II, 2016, photo: Gary Beechey
With some flashes of red, black and grey are the dominant colours with versatile, grey monumental panels serving as a backdrop. The costumes of the Venetians look like World War I vintage but they could be of another era. The Venetians have rifles with bayonets whereas the Ottomans are sporting spears, shields and swords. This is not particularly clear.

Maometto II ends on a note of self-sacrifice, heart-wrenching tragedy and indeed apotheosis. That may be one of its many virtues (musically it is decidedly so) but it had many detractors when it was first produced, so many in fact that Rossini rewrote it with a happy ending. That did not save it.

We are luckier. This is a very worthwhile operatic experience and damn the opera’s defects and its detractors.