THE SUMMONED – REVIEW OF FILIPPO’S PLAY AT TARRAGON

Fabrizio Filippo’s new play, The Summoned, is a satire and critique of our tech-crazy society. It has a few laughs and a serious message both delivered by robotic creatures that are neither human nor mechanical.

The play is placed between two bookends. The first is the phrase "It is not in the stars to hold our destiny but in ourselves" which I take to mean that we are masters of our own fate and our destiny is not pre-ordained by some supernatural power. The phrase is not Shakespeare’s but it does hark back to Cassius’s remark to Brutus in Julius Caesar that "The fault, dear Brutus, is not in our stars, but in ourselves, that we are underlings" which I think means the much the same thing. 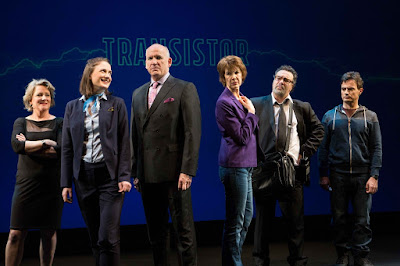 Kelli Fox, Rachel Cairns, John Bourgeois,  Maggie Huculak, Tony Nappo, Farbrizio Filippo. Photo: Cylla von Tiedemann
The second phrase is the question “How far from our nature will technology take us?” The question is based, I suppose, on the belief that we have an essential human nature and technology is moving us away from it.

The programme tells us that the play is about the reading of the will of a billionaire tech visionary to the most important people in his life. That is a classic tableau in plays and films and we are prepared for Filippo to give us a modern view of an old chestnut.

But then we are told that “what transpires is nothing short of a paradigm shift in the very fabric of these characters’ lives, the nature of mortality and the future of technology.” “Paradigm”, “fabric”, “mortality” – are they pulling our leg or is the publicity department gone haywire?

Six people do meet in a hotel for the reading of the billionaire’s will but that does not come until near the end of the play, takes less than a minute and is almost inconsequential. So much for that conventional scene.

The attendees are an interesting group. There is Gary, the tech company’s president; Aldous, who acts as a chorus and a character; his “mother” Annie; Laura the lawyer; Isla the “flight attendant” and Quentin who is in charge of security. Giving more information about the characters might spoil the plot.

The most interesting and perhaps entertaining character is Quentin. He is loaded with cell phones, walkie-talkies and security equipment that may have been used by Neanderthals and he is a buffoon and a caricature of paranoid security police.

The rest act in bizarre, mechanical and inhuman ways that made them look like robots. There is generous use of techie language including words and images projected on a large screen in the background. My technological illiteracy was of no help in recognizing how much of what was said was proper science or gibberish.

There is discussion of immaculate conception and reproduction of the human race (imagine parentheses everywhere) with simulated carnal practices here and there, not to mention disregard of consanguinity. 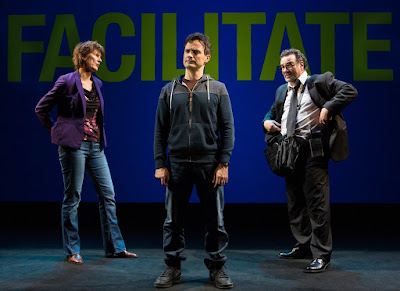 Maggie Huculak, Fabrizio Filippo and Tony Nappo. Photo: Cylla von Tiedemann
The satire on our tech-crazy world produces a few laughs most of them emanating from the clownish Quentin of Tony Nappo. Even those start getting stale when he puts away the cell phone or whatever he is holding in his hand into his carrying case with a big crunch.

The other characters do not produce many laughs as they go about with their inexplicable emotional tantrums or robotic dialogue.

Director Richard Rose puts the actors through their paces and I can’t say that anyone does a bad job. But the fact remains that the play left me cold. I ascribe much of it to being mortally challenged in matters technical. The more technologically versed may get a lot more from the play as a satire or a serious commentary of the effect of technology on our essential human nature. They may even take the fabric and the paradigm the way Filippo intended them. They are the lucky ones.
Posted by James Karas at 4:25 PM